DILEMMA OF A GHOST/ANOWA by Ama Ata Aidoo 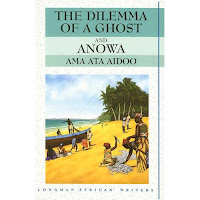 Oh dear friends and neighbours. It's time for a little theatre.

These are a pair of charming little plays written by a Ghanaian woman in the 1960s. She was born into a royal (and I'm assuming wealthy) Ghanian family in 1942, and must have had some forward thinking parents, because she got a bit of formal education. She was sent to a convent school, and her headmistress there gave her her first typewriter. It's interesting to see what she has to say, because there are very few people who grew up in a rural, traditional African household and were given a chance to write about it before colonialism wiped that lifestyle out.

There was a very small window between those cultures meeting the West, and being able to dialogue with the West as 'themsleves' - as it were - and the West then wiping them out. Well that sounds a bit dramatic, but you know what I mean. It's like LARK RISE TO CANDLEFORD by Flora Thompson. In one of the weirder comparisons of this blog. There's lots of writing about rural English people of the 19th century, but very little of it is by rural English people of the 19th century. The number of people who actually came from those communities and had the time, interest and access to write is tiny. By the time a large number had been sent to school, and learned to think about writing as a job (as opposed to digging potatoes or whatever) the rural community was gone, as they'd all been sent to school and were planning on being writers.

DILEMMA OF A GHOST is about a man whose Ghanaian family has scraped and saved to send him to University in the US. He returns with an African American wife, and neither wife nor family are happy. ANOWA tells the story - I think traditional - of a woman who rebelled against her family, and chose her own husband; and then, when her husband to everyone's surprise became successful, rebelled against him too. Both plays have strong central female characters, which is interesting, and unusual, and probably tells us a good deal about Aidoo. Both also have a good line in comedy, with the gossipy older ladies being particularly successful. Both set up strong and interesting oppositions. In DILEMMA, who will win our young man's soul? In ANOWA,what is wrong with Anowa? Both plays could be really great! But - you knew there was a but, huh? - both seem to go horribly wrong about three quarters in.

The big reveal in DILEMMA, which shocks and apparently (?) reconciles the family to the newcomer is that she is not barren, but simply waiting to choose when she will have children. And the big reveal in ANOWA is that her husband has become impotent. They both kills themselves upon hearing this news. I can only say: ?
- March 11, 2010