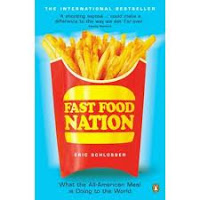 After all that 19th century morality I thought it was time for 20th century immorality. FAST FOOD NATION provides that in spades. Spades of offal, eyeballs, fat, salt, animal cruelty and poor working conditions for illegal immigrants.

This book is about the way in which fast food has shaped global culture. He begins by discussing the genesis of fast food as we know it. Apparently, it arose in Southern California, a place built very much around the motor car. There were lots of places selling burgers and so on, but it was all cooked from scratch by experienced cooks, with waitresses on hand. Then the McDonald's brothers - who were sick of their teenage clientele, apparently, who came mostly for the young pretty waitresses - came up with a new system, based on the production line concept. They cut their menu to only those things that could be eaten without a plate or cultery, and simplifed the food preparation process so that no experience was necessary - each worker just did one simple part of preparation, so experienced short order cooks were no longer necessary. They were thus able to massively cut prices, and business boomed. Apparently this was the first time working class people could afford to eat in a 'restaurant.' Other people copied, and the idea spread. The McDonalds - now this is heartening - after they got really really rich, weren't interested in getting any richer. So they weren't looking to expand. But this other guy, Ray Kroc, convinced them to let him franchise for them. And that's the real birth of the chain. He always said he wasn't in the food business, but in show business - interesting, no? Anyway, he always resented doing what he perceived as all the work, and was eventually delighted to buy them out, and in the end force the closure of their last restaurant (now called M) by opening a McDonald's up the road.

Interestingly, practically every big fast food chain was started by a high school drop out.

The book also talked about how fast food restaurants market primarily to children, especially toddlers. 25% of Americans eat fast food in any one day, and 90% of American children under 9 visit a McDonalds in any one month. Oh yes. It's not good news. I in 8 Americans has actually worked for McDonalds at some point.

Also, something I never knew is that fast food in itself is made to be bland, as the flavour actually comes for added chemicals - just a few drops, that are carefully controlled. Most of the flavour in all fast food is made in New Jersey, apparently.

One interesting thing was how much these big corporations, that drivel on about the free market, and competition, etc etc, are happy to take government handouts. Lots of franchises are begun with money from the fund meant to help small businesses. In fact, big corporations use it when they're not sure an area can stand another Burger King or whatever, as they know the government will just take the loss. Also, they've worked hard to make sure franchisees have none of the normal consumer protections -eg, they corporations can cancel the contract at any time; they can limit who you can sell it too; they can make you use their suppliers, no matter what the cost, etc etc.

And yet, I have to tell you that all this talk about french fries made me want to eat french fires. What does this mean?
- August 01, 2010