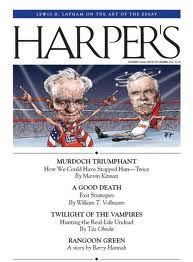 As you can see, I am catching up with my HARPERS addiction . . .

From the Dept. of Well Okaaaay :

“Also a Western conceit is a vampire's pallor; whereas female vampires are beautiful and white robed, most firsthand accounts indicate that male vampires are ruddy, corpulent peasants, whose affect - once unearthed – is that of a freshly gorged mosquito. In animal form, the vampire is not strictly limited to the bat but can appear to its victims as a cat, a dog, a rodent or even a butterfly. These manifestations are not to be confused with vampires that were never human in the first place, which may even assume a vegetal guise (among numerous indignities through history, the Roma suffered the obscure nuisance of vampire watermelons).”
Twilight of the Vampires: Hunting the real-life undead” By Tea Obreht