BRITAIN'S WORLD CUP BID or, Being Safe in Elevators 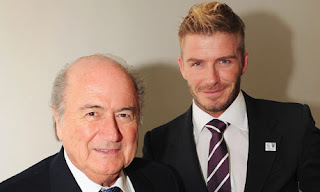 In an unexpected departure for this blog, let's talk about football for a moment. This doesn't really count in a blog about reading, expect in so far as if you are literate you cannot fail to have read about the UK losing the World Cup. In fact, even if you aren't literate. Even if you are living in a box, pretty much.

Now I don't care at all about the World Cup. But, what makes me cross is the fact that apparently the British bid team were told that it was the British media that hurt the bid's chances. This is clearly a thinly veiled reference to the allegations on Panorama about the World Cup bidding being totally corrupt, which no doubt were entirely correct.

So who do they give it to instead? RUSSIA. Which is certainly not going to have it's bid effected by any small inconvenience such as a goddamn FREE PRESS. No, no, if you had anything to say about the World Cup in a Russian newspaper, you better watch out next time you get into an ELEVATOR. Let's take a moment here to salute ANNA POLITKOVSKAYA! (If you don't know who you are saluting: here)