THE CORRECTIONS by Jonathan Franzen 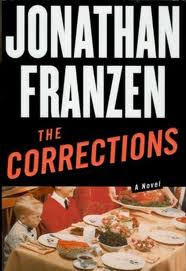 I read Franzen's most recent novel, FREEDOM, a couple of months ago. I enjoyed it so much that when I saw this one, which was his first big hit, in the library, I fell upon it and devoured it. And I have to report, it is tasty.

From the Dept. of This Guy Can Write A Long Sentence Like Noone Else:
(It's the thoughts of a son seeing his parents arrive at the airport)

He had time for one subversive thought about his parents' Nordic Pleasurelines shoulder bags – either Nordic Pleasurelines sent bags like these to every booker of its cruises as a cynical means of getting inexpensive walk-about publicity or as a practical means of tagging the cruise participants for greater ease of handling at embarkation points or as a benign means of building espirit de corps; or else Enid and Alfred had deliberately saved the bags from some previous Nordic Pleasurelines cruise, and, out a misguided sense of loyalty, had chosen to carry them on their upcoming cruise as well; and in either case Chip was appalled by his parents' willingness to make themselves vectors of corporate advertising – before he shouldered the bags himself and assumed the burden of seeing LaGuardia Airport and New York City and his life and clothes and body through the disappointed eyes of his parents.

I find this hilarious and I love it. The story is about a fairly dysfunctional family. We have mum and dad, Alfred and Enid Lambert, who live in the Midwest, and their three grown children, who have all fled to the East Coast. This little bit, also from the opening pages, will give you a taste of the kind of family this is:

To anyone who saw them averting their eyes from the dark-haired New Yorkers careering past them, to anyone who caught a glimpse of Alfred's straw fedora looming at the height of Iowa corn on Labour Day, or the yellow wool of the slacks stretching over Enid's outslung hip, it was obvious that they were midwestern and intimidated. But to Chip Lambert, who was waiting for them just beyond the security checkpoint, they were killers.

Chip feels a failure, having lost his job as an associate professor for sleeping with a student. His older brother Gary is rich and has a beautiful family but is finding success unexpectedly disappointing. His younger sister Denise is a chef whose career absorbed so much of her energy that she only late in life discovers that she is probably gay.

We move back and forth between the stories of each member of the family, each amazingly vividly imagined. The arc of the story is given by the father Alfred's slow decline into dementia, which forces the family to face various feelings they have long hidden about each other. There's also a strong strand of love and nostalgia for the Midwest, which I found quite compelling.

So, a very good book. But not quite as good as FREEDOM, I don't think.

He wrote THE CORRECTIONS ten years before FREEDOM, and it shows. It's clearly the work of a much younger writer, I think, being full of overly obvious metaphor, and rather overheated language on occasion (a season is described as “hurtling, hurtling towards winter” - oh dear). There's also a very dubious section where the character of Chip goes to Lithuania, and Franzen spends a lot of time making fun of Lithunia. Now, the book in general is in a comic vein, and he makes a lot of fun of America too, but it's very obvious he knows nothing about Lithuania, and I didn't really enjoy seeing a developing country being mocked in an ill-educated way, when the rest of the comedy in the book is so intelligently observed and so detailed.

But honestly, I can forgive anything to a man who can write like this:
(About a girl being approached by boys at university)


Julia wore the heads-up look of a squirrel convinced that somebody had stale bread in his pocket.