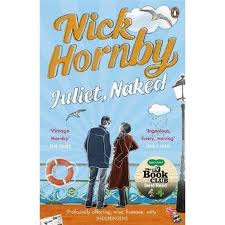 This little book begins in a toilet.

Duncan has dragged his girlfriend Annie to America on holiday to see the toilet because he is obsessed with the musician Tucker Crowe, who has not recorded any music in twenty years, retiring soon after a mysterious incident in this same toilet.

Duncan and Annie have been together for fifteen years. Annie is beginning to feel that, just as she initially drifted into the relationship, she ought now to drift out of it.

A new album of old Tucker Crowe material is released, and, primarily to irritate Duncan, Annie comments on it in an online forum of which he is an obsessive member. This impels Duncan to cheat on her and then sort of half-heartedly leave her. It also impels Tucker Crowe, astonishingly, to contact her, and say how much he appreciated her review.

Not very believably, she begins a correspondence with Crowe, who eventually visits her in England.

You may find that my plot summary there ends rather oddly, and the reason for that would be that the book itself ends oddly. It just sort of stutters to a close. I was left slightly confused as to what I was supposed to understand about the characters. Perhaps I just need to understand that Mr Hornby suddenly realized he had to get to the cleaners before they closed?

I enjoyed the presentation of the dangers of an easy relationship, and of finding yourself settling without ever making the decision to do so. I also really enjoyed the character of Duncan, who is a wonderfully believable 40-something music dork.

The whole book however was a bit like eating unsalted popcorn. It went down easy and was kind of fun, but didn't leave much of a mark.
- March 01, 2011