KNOTS AND CROSSES by Ian Rankin 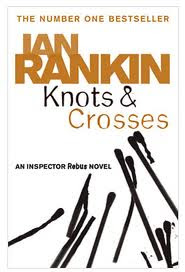 I've read a number of Ian Rankin's crime novels, which are all set in Edinburgh and feature Detective John Rebus as the central character. When I say, a number, I mean a LARGE number, and all have been read for work.

They are not as totally rubbish as most crime fiction.

KNOTS AND CROSSES was in fact Rankin's first Rebus novel, and it is therefore interesting to read it last. Apparently, according to the author, he was attempting to write a modern Jeckyll and Hyde, and not a genre crime novel at all. This is odd, as in some ways it couldn't be more genre:

In other ways however, it's not especially genre. Rebus has complex emotional issues, and a full inner life, for example. For a while you are even supposed to think that he might be the murderer. He has a family life, he has gross sex scenes – he has all sorts of fallabilities that the Rebus of the later books, the genre Rebus, really does not.

It's as if the hard inner seed of a genre writer is in the book, and it wants out. Rankin was a Literature Phd when he wrote it, and you can see it; but the genre writer is there, just waiting to cut himself out of all his early grad student constraints.
- March 07, 2011