FAR FROM THE MADDING CROWD by Thomas Hardy 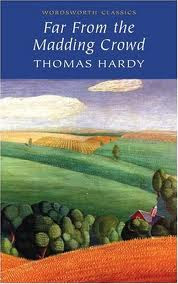 I’ve been having some trouble sleeping so am often awake from 3 am for a bit, and was the other night. At some point one does have to read FAR FROM THE MADDING CROWD, and I guess this was my point.

FAR FROM THE MADDING CROWD tells the story of one Gabriel Oak, a shepherd who has managed to take out a loan to get his own flock and some land. He asks a local young lady, Bathsheba, to marry him. She refuses. Some time after this his young dog in an excess of zeal keeps chasing the sheep till he forces them over a cliff.

George’s son (the dog) had done his work so thoroughly that he was considered too good a workman to live, and was, in fact, taken and tragically shot at twelve o’clock that same day – another instance of the untoward fate which so often attends dogs and other philosophers who follow out a train of reasoning to its logical conclusion, and attempt perfectly consistent conduct in a world made up so largely of compromise.


Gabriel is thus destitute again, as all his investment, the fruit of ten years work, is wiped out. This all happens before page 33. I was not surprised. I know very well not to trust Hardy, his books are hectic. He will crush you soon as look at you. I learnt this from reading JUDE THE OBSCURE, and I won’t give away the plot, but suffice to say, don’t get too attached to the children.

Anyway, Bathsheba has inherited a farm, and employs Gabriel, much to his chagrin. She marries a certain Sgt Troy who is irritatingly obviously going to be trouble, and he is, eventually faking his own death after his pregnant ex-girlfriend appears and dies of starvation on the doorstep. When he resurrects himself Bathsheba’s new boyfriend shoots him dead, and goes to jail himself. Enter Gabriel, and a happy ending.

So a story not lacking in drama, much of it stupid. However it was entertaining, and there is a supporting cast of yokels which is hilariously well written. Also, Hardy as a philosopher has much to say that is of interest - I enjoyed this, on Gabriel after his loss:

He had passed through an ordeal of wretchedness which had given him more than it had taken away. . . . . There was left to him a dignified calm he had never before known, and that indifference to fate which, though it often makes a villain of aman, is the basis of his sublimity if it does not. And thus the abasement had been exultation, and the loss gain.

THE MOON AND SIXPENCE by W. Somerset Maugham


I love Maugham’s book OF HUMAN BONDAGE, so I was excited to find this in my cousin’s bookcase.

THE MOON AND SIXPENCE is very loosely inspired by the life of the nineteenth century painter Paul Gauguin. It tells the story of one Charles Strickland, an English stockbroker who leaves his wife and children and runs away to Paris. Everyone assumes he is in love with another woman, but in fact he is in love with oil painting. This is met with general boggling by all his acquaintance.

He paints furiously while in Paris, and almost dies of starvation there. He eventually takes a passage working on a ship going east. When he finds Tahiti, he feels himself at last at home, moves in with a local woman, and continues to paint furiously till he dies of leprosy.

This book is quite interesting in terms of considering what qualifies as a worthwhile goal for your life, and in terms of what it means if your goal is not one that anyone else understands:


Each one of us is alone in the world....We seek pitifully to convey to others the treasures of our heart, but they have not the power to accept them, and so we go lonely, side by side but not together, unable to know our fellows and unknown by them. We are like people living in a country whose language they know so little that, with all manner of beautiful and profound things to say, they are condemned to the banalities of the conversation manual. Their brain is seething with ideas, and they can only tell you that the umbrella of the gardener’s aunt is in the house

So interesting, but, I thought, a little trite. The above is sort of like OF HUMAN BONDAGE, but on a bad day.

It also all seems to be written by W Somerset Misogynist. It’s only 217 pages, but manages all sorts of unexpected and distasteful discussions of his early twentieth century views on gender:

When a woman loves you she’s not satisfied until she possesses your soul. Because she’s weak she has a rage for domination, and nothing less will satisfy her. She has a small mind, and she resents the abstract which she is unable to grasp. She is occupied with material things, and she is jealous of the ideal. The soul of man wanders through the uppermost regions of the universe, and she seeks to imprison it in the circle of her account – book.


Now, I never knew I could use my trusty account-book for encircling unwary souls! My small mind shall get right on that.

I am not surprised this has all come out in a book on Gauguin. I never liked those pictures of women he made, who all just stare out at you, half-naked, as if they had a secret and mysterious message, that message being BOOBS.
- April 05, 2011 6 comments: Links to this post

THE ENGLISH PATIENT by Michael Ondaatje

Honestly, I wanted to like this book. I wanted to so much that I forced myself all the way up to page 125, before I just had to give up.

It is focused on a villa in Italy in the aftermath of the second World War in which live a group of shell-shocked characters: a severely burnt pilot, his nurse, a sapper who is in love with the nurse, and an ex-spy, with no thumbs, who is also in love with the nurse. Could be interesting, right? Sounds like the bare bones of a good movie, right?

OH IT IS SO POETIC I WANT TO PUKE. I was worried right from the get go, because there are a lot of prepositions, which in my experience is always a bad sign. So it begins: "She stands up in the garden . . . " then "She has sensed a shift . . " "Every four days she washes his black body."

Mr Ondaatje likes a literary flourish. Let me just give you the first and last lines of a couple of sections, chosen quite at random.


". . . her body full of sentences and moments, as if awakening from sleep with a heaviness caused by unremembered dreams."
"This cools her and she likes it when she goes outside and the breezes hit her, erasing the thunder."
"Someday there would be a bower of green limes, rooms of green light."

I know this novel won the Booker, and all that, but I can barely choose a paragraph at random without being irritated. Homicidal, actually, by page 125.
- April 03, 2011 8 comments: Links to this post