A COLOSSAL FAILURE OF COMMON SENSE by Lawrence McDonald 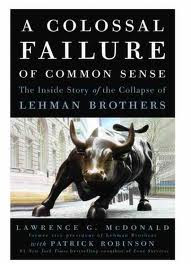 The subtitle of this book is "The Inside Story of the Collapse of Lehman Brothers," and so it proves to be, written by a former trader there, in a somewhat embarrassingly breathless I-read-bad-thrillers kind of style.

We begin with McDonald's early years, in which we get a bit too much information about his various family issues and his obsession with working on Wall Street. Once he is hired at Lehman the book improves, and the author does an excellent job explaining clearly the complicated financial products that were Lehman's undoing.

What I found particularly interesting was the fact that (at least according to McDonald) long before the crisis many people were aware how shaky the American mortgage market was, including many people at Lehman, and made repeated efforts to get the company out of the web of mortagage debt in which it was entrapped. I'm puzzled by how total the collapse was, and how unprepared the world's governments seem to have been for it, given that so many people seem to have been aware for so long of which way the CDO winds were blowing.

You may recall I recently read Ehrenreich's BRIGHT SIDED, about the role of so-called positive thinking in the financial crisis, and I was interested to see how 'positive' Dick Fuld, the head of Lehman, insisted on being, right through to the bitter, bankrupt end. Warned of the risks by Mike Gelband, the firm's fixed income chief, he responded: "I don't want you to tell me why we can't. I want you to be creative, and tell me how we can. You're much too cautious. What are you afraid of?"

Presumably he was afraid of world wide financial armageddon.

So, an interesting book, but also a sort of interesting view in a trader's life. Leaving aside the horribly bad thriller style writing, what stays with me most is the idea that trading is somehow a higher profession, a profession that singles you out as special, and that making money is genuinely its own reward. I'm sure these ideas are widely held, but you don't usually hear them quite so baldly put. His idea of describing someone is to describe what their fancy flat is like. His description of their work day makes it sound like they were nobly fighting in the trenches. Take this, about a bonus:


Not one day passes when I do not hink with profound gratitude of those moments when I stood up there with Rich and Larry and received my million-dollar reward. No day. No night.


I mean, seriously, get a hobby. Or become obsessed with some woman or something. It's creepy to think about some bonus, every day. Every night.
- February 29, 2012 2 comments: Links to this post

THE CATCHER IN THE RYE by JD Salinger

Holden is on the verge of being expelled from his expensive boarding school when, on impulse, after a fist fight, he decides to leave the school a couple of days early. The novel follows that couple of days, during which Holden wanders around New York and struggles with his many and various issues.

Holden is a seriously unhappy young man, but the book is often very funny. Here he is describing one of his old teachers:


He started going into this nodding routine. You never saw anybody nod as much in your life as old Spencer did. You never knew if he was nodding a lot because he was thinking and all, or just because he was a nice old guy that didn't know his ass from his elbow.

Or here's a movie review:


All I can say is, don't see it if you don't want to puke all over yourself.

A model of the sort of journalistic excellence to which this blog aspires.

What is so difficult about Holden's situation, and perhaps what has made it so pertinent to generations of young people in particular, is that Holden can't say why he is so unhappy. His is an amorphous, nebulous alienation.

The closest he can get to describing his feelings is to calling everyone and everything 'phony.' Thus, for example, on the movie:


The part that got me was, there was this lady sitting next to me that cried all through the goddam picture. The phonier it got, the more she cried. You'd have thought she did it because she was kindhearted as hell, but I was sitting right next to her, and she wasn't. She had this little kid with her that was bored as hell and had to go to the bathroom, but she wouldn't take him. She kept telling him to sit still and behave himself. She was about as kindhearted as a goddamn wolf You take somebody that cries their goddamn eye out over phony stuff in the movies, and nine times out of ten they're mean bastards at heart. I'm not kidding.

He also finds it phony when people, to be polite, tell him the coffee's almost ready. It's also phony when ex-girfriends are polite to him. And ninety percent of what's on television, also phony.

Undoubtedly, these things are phony. And Holden's revolt against all that, I found admirable, and indeed logically coherent. But I think its a very young person's revolt. When you get a little older, you maybe start to think that we all need to make concessions, and compromises, just to be able to keep on sliding by. Most people's lives are sort of incoherent. 'Marriage is compromise,' an elderly Indian man at a wedding told me recently; and then he added, with awkward but total sincerity: 'life is compromise.'

How much do you love the chapter titles of this book? A representative sample:

I mean, this is not messing about. This is stuffing your book as full of plot as possible. Daniel Defoe would have done well in the twenty first century, working on BOURNE IDENTITY and REAL HOUSEWIVES OF WHEREVER THE HELL. Though I'm not sure he's bothered, as he did pretty damn well in the seventeenth century too. This book is a big part of his life's achievement, as ROBINSON CRUSOE has a place in history as being the first ever novel in English.

It's a curiously modern piece of work, not least because Defoe pretended it was 'based on real events'. He even put in a preface from 'the editor' assuring readerss of its veracity. This is not too surprising when we learn that Defoe was described by one contemporary as“ a shrewd, shifty, ingenious man, much mistrusted and frequently imprisoned.” According to the introduction:


He was imprisoned for debt as well as for his satirical writing, and his reverses including bankruptcy and the failure of get-rich-quick schemes, of which raising civet cats (their glands were used to produce perfume) for quick cash was just one. He was a journalist, publisher, poet, businessman and sometime secret agent

In another very modern turn of events, the book, which was huge bestseller, was immediately widely pirated.

You may not know that Robinson Crusoe was in fact Robinson Kretuznaer, a German immigrant to York, who anglicized his name; but you probably know much else about him. Essentially the story is he is shipwrecked on an island where he lives for over twenty years on his own, until he saves a local man from ethnic warfare (okay cannibalism), names him after a day of the week, and is eventually rescued.

Learning how Cruose teaches himself to survive – how he makes cheese, and tries to build casks, is very compelling. So to is his description of the loneliness, which must surely be a far greater challenge than diary or storage. Here he is at dinner:


. . .then to see how like a king I dined too, all alone, attended by my servants; Poll, as if he had been my favourite, was the only person admitted to talk to me. My dog, who was now grown very old and crazy, and had found no species to multiply his kind upon, sat always at my right hand; and two cats, one on one side the table and one on the other, expecting now and then a bit from my hand, as a a mark of special favour.

Poll is the parrot he spends hours teaching to talk so he can hear some kind of voice.

Of course when he finally does get to meet a human, and thus hear a voice, I think we can be pretty confident that the main thing he'd be doing is blubbing and shaking. However Defoe seems to feel that in fact he would be delighted to have extra domestic help, name him FRIDAY, and get the poor unfortunate to call him MASTER.

You can see why this book is often read as a metaphor for colonialism, and that's certainly one way to understand it That said, it has many themes, and even the naughty-western-hegemony-naughty thing can be overstated. Crusoe is very upset by having to watch cannibalism on his island, and is tortured by feeling he ought to save the victims. There follows then a really interested and complicated debate about what constitutes 'right' in other cultures, which struck me – again – as curiously modern.


. . .who, however they were isolators and barbarians and had several bloody and barbarous rites in their customs, such as sacrificing human bodies to their idols, were yet, as to the Spaniards, very innocent people; and that the rooting of them out of the country is spoken of with the utmost abhorrence and detestation by even the Spaniards themselves, at this time, . . . as a bloody and unnatural piece of cruelty, unjustifiable to god or to man . .

So, curiously modern. So too is the ending:


All these things, with some very surprising incidents in some new adventures of my own, for ten years more, I may perhaps give a further account of hereafter.

Sequel anyone? He needs something to fall back on if the whole civet cat thing doesn't work out.
- February 18, 2012 2 comments: Links to this post

THE BLIND ASSASSIN by Margaret Atwood 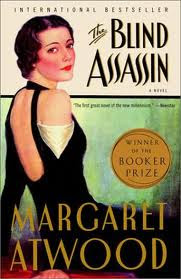 I am insanely far behind in blogging my books for 2012, so without further ado lets turn to the appalling BLIND ASSASSIN by Margaret Atwood.

This dire book won the Booker, which after this and the THE FINKLER QUESTION, I'm beginning to regard as a mark of shame.

It tells the story of two young women whose father is slowly going bankrupt. The oldest one agrees to marry a rich man to save the family. She lives a terribly constrained life, which she enlivens with an affair. Her sister comes to live with the family and eventually kills herself.

The story is told primarily from the perspective of the older sister, as an old woman in the present. She lives a very dull life, and this is for some reason detailed for us in excruciating detail. If you have any familiarity with the tastes of the Booker committee, you won't be surprised to hear that this is not the only narrative voice. The story is interwoven with a science fiction story (how innovative, I could just puke) and a pretentiously third person account of the affair.

Here's a representative extract, a description of a man in an old photograph: