THE PRIME MINISTER by Anthony Trollope

I wasn't stressed when I finished Trollope's Barchester series, because I knew I had the whole Palliser series still to go. 6 books, 800 pages a book, surely I was good till well into my 40s? And now, somehow, oh god, I've almost finished all the Pallisers!

THE PRIME MINISTER is the second to last. I'm only in my 30s! What am I going to do! I'm running out of Victorians. This is terrible. I don't know. Shall I start reading minor authors? Shall I start on people in translation? I never thought I'd reach the stage where the great partimony of world literature would start to look a bit thin.

THE PRIME MINISTER tells the story of Emily Wharton, who is much beloved of one Arthur Fletcher. She is however swept off her feet by another one, Ferdinand Lopez, and marries him in haste, regretting - in the traditional fashion – at leisure.

Ferdinand Lopez turns out to be a commercial adventurer, and gives us a very coherent explanation of today's commodity bubble:


“If I buy a ton of coffee and keep it six weeks, why do I buy it and keep it, and why does the seller sell it instead of keeping it? The seller sells it because he thinks he can do best by parting with it now at a certain price. I buy it because I think I can make money by keeping it. It is just the same as thought we were to back our opinions. He backs the fall. I back the rise. You needn't have coffee and you needn't have guano to do this. Indeed the possession of the coffee or the guano is only a very clumsy addition to the trouble of your profession.” . . . Coffee and guano still had to be bought because the world was dull and would not learn the tricks of the trade as learnt by Ferdinand Lopez, - also possibly because somebody might want such articles, - but our enterprising hero looked for a time in which no such dull burden would be imposed on him.

Ferdinand commits suicide eventually, when he is ruined financially, which sadly most London bankers haven't had the good taste to do. I was sorry to lose him, as he's a fabulous character:


For he was essentially one of those men who are always, in the inner workings of their minds, defending themselves and attacking others. . . .He could not seat himself in a railway carriage without a lesson to his opposite neighbour that in all the mutual affairs of travelling, arrangement of feet, disposition of bags, and opening of windows, it would be the neighbour's duty to submit and his to exact.

Emily now ought to have been happy but instead she wrapped herself in black and mourning not him so much as the ruin of her hopes and her (heavily implied) virginity. Lovely Arthur Fletcher keeps pursuing her, and I was in hell. I know Trollope well as a total bitch who won't necessarily allow a happy ending (I am still scarred from this). But eventually he does. Hurray!

There's also an entire parallel story with Lady Glencora Palliser, who we met in the first novel, and who has been appearing since. It's like meeting old friends. Her husband is a rather failed Prime Minister, and we get lots of boring Corn Laws, Home Rule, etc etc in typical Trollope fashion. But we have to forgive him when we get letters from fathers like this:


Everett is well again, and as idle as ever. Your aunt Roby is making a fool of herself in Harrogate. I have heard nothing from Herefordshire. Everything is very quiet and lonely here. Your affectionate father, A Wharton

People seen by the mind are exactly different to things seen by the eye. They grow smaller and smaller as you come nearer down to them, whereas things become bigger.


What beasts, what brutes, what ungrateful wretches men are! - worse than women when they get together in numbers enough to be bold.

THE SLAP by Christos Tsiolkas

At a barbeque in suburban Melbourne a man slaps a bratty child who is not his own. Then everything kicks off. The parents of the brat decide to involve the police (!), which creates a problem, as the mother is the best friend of the wife of the slapper's cousin. You may need to read that last sentence twice. Everyone in this small middle class world is now slowly drawn in to the drama.

It makes for an entertaining story which manages to capture within a small group of characters a swathe of contemporary Australian identity. The slap's a small event, followed by a bunch of small reactions, that somehow manages to give an insight into a big continent.

It's also a very interesting exploration of a certain life stage - lots of the characters are in their 40s, and seem to be faced with the fact that they have achieved much of what they set out to achieve, and now have to ask: what's next? Here's a television writer:


She was chic, and with age, that mattered more than looks. Chic didn't desert you. She did look her age but she looked fantastic. She was secure, comfortable and she had a good life. She knew this but it was not enough. She wanted to do great things. Television was not a great thing. Rhys was not a great thing. She wanted to write a book that would shake or move of be known throughout the world. She wanted the grand success. Or the grand failure. It did not matter. She did not want the pleasurable and comfortable mediocrity in which she now wallowed to be the sum of her life.

The book did falter a little towards the end. The author clearly does not sympathize with the slapped child's parents, and so there was towards the end a certain mean-spirited kind of banging away at his theme, which made it a less rich and complex book than it could have been. The characters also are not always as diverse as they could be - every single married man in the book is rather miserably having an affair. Thus we get lots of this sort of thing:


. . . the tearing open of a condom packet, and then his cock was entering her. she gritted her teeth, chocked back a cry as he pushed hard inside her, the pain slicing her . .

It's also all a bit suffocatingly bourgeoisie after a while:


A cruel thought flashed quickly and guiltily in her mind: be a man, deal with your fucking mid-life crisis - it is so boring. She scanned the list of dishes. She would order the whole fish smoked in a banana leaf in nonya spices. She shut her menu. 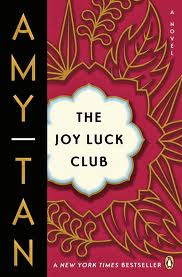 This is a famous best seller which I have been ignoring for years fearing it was going to be a bit of a let-me-milk-my-heritage cheesy Americana. It's not quite that bad, but I'm afraid that yes, that's the general area.

The story revolves around four Chinese immigrant women in San Francisco who meet to play Mah Jong. Their daughters join them. We flash back in time to the mothers' lives in China so we can all be in touch with our heritage. Yes, it's a cheese fest.

There are some interesting stories, and some sweet bits - here's a description of a little boy who's just been disciplined:


So Bing wandered down the beach, walking stiffly like an ousted emperor, picking up shards of rock and chunks of driftwood

But then there are some dire bits. Here's some quality believable dialogue, which shows how people talk in China:


Thank you Little Queen. Then you must teach my daughter this same lesson. How to lose your innocence but not you hope. How to laugh forever.

Eventually one of the daughters travels to China, and to her horror, her mother's home of Guangzhou "looks like a major American city." Worse yet, in her hotel "There's a colour television with remote-control panels built into the lamp table between the twin beds." What a betrayal. But then luckily she takes a shower: "The hotel has provided little packets of shampoo which upon opening, I discover is the consistency of colour of hoisin sauce. This is more like it, I think. This is China."
- March 17, 2012 No comments: Links to this post

I rarely blog my reading of blogs, this seeming just too 21st century to bear, but today I do just have to record a blog I really enjoy, Emma Beddington's BELGIAN WAFFLING. Describing herself as "an ex-Eurodrone, unfit mother, slattern," she writes a most amusing blog on that most difficult of subjects, herself. With the added bonus of an ongoing series of pictures of mournful dogs.

Most really recently she has been writing about ZAFARA by Michael Allin, which is about the first giraffe in France. She reports:

Zarafa WALKED from Marseille to Paris in 1826, accompanied by 4 Egyptian handlers, 2 antelopes, some cows, and zoologist Etienne Geoffroy de Saint-Hilaire, who kept a sort of diary of the trip:

"Today the giraffe toured a part of the city, accompanied by her keepers, a numerous picket of police and a great crowd of the curious. The courteous animal did not fail to visit the Prefect, who accorded her the welcome due to a beautiful stranger. In order to protect her from the cold temperature she was dressed in a mantle of waxed taffeta".

"One can say that the Giraffe has nothing elegant or graceful in the detail of her forms; her short body, her high and close-together legs, the excessive length of her neck, the declivity of her back, her badly-rounded rump and her long and bare tail, all these things contrast in a shocking manner; she seems badly built, unbalanced on her feet, and yet one is seized by astonishment at the sight of her, and one finds her beautiful without being able to say why".