When I contrast what I have achieved in my measurably brief life with what Stanley has achieved in his possibly briefer one, the effect is to sweep utterly away the ten-storey edifice of my own self-appreciation and to leave nothing behind but the cellar.

This is Mark Twain on the life of Henry Morton Stanley. And truly, it was a remarkable life. I am definitely going to have to start working harder.

Stanley was born illegitimate in Wales, and ended up in the workhouse. He ran away to sea, and ended up in America, where he fought on the side of the South in the Civil War. Then, once he was captured and it was clear his side was losing, he changed to the North. He became a journalist, travelling all over the world. Dr Livingstone had by then not been heard of for a number of years, so he dreamed up the stunt of finding him, and thus began one of the greatest journeys of the modern world.

You don't decide it will be a good idea to walk from Zanzibar to the Congo before the invention of effective anti-malarials, or indeed even after their invention, unless you have some pretty severe personal problems. In these, Stanley was not lacking. You also need to be almost insanely tough, and this Stanley also was.

He made several multi-year journeys through Africa, in horrific conditions, including bogs, marshes, forests, inter-ethnic wars, ulcers, fevers, starvation, malaria, slavers, and cannibals. At the end of one journey, when they heard the midday cannon at Mombasa, one man ran off (with his parrot), suddenly running quite mad, and never reappeared. Being on the march was like being on a lifeboat, with all the attendant horrors and decisions about when to start eating each other, with the added bonus of malaria. On one trip, Stanley had it 27 times.

Apparently there is a tradition that holds that Stanley was a terrible racist, who'd beat a black person to death as soon as look at them, and the author is at pains to defend him. Indeed, much of his private diaries speak of his love and respect for the porters who he walked with for years, and of his deep horror at the slave trade. Many porters signed on for multiple trips, which certainly doesn't suggest he was a monster. Part of his reputation is due to one of his deputies who lost his mind, and - don't read this if you are delicate - bought a girl so as to watch her being eaten by cannibals. His diary records her begging for mama and papa.

It is about the slave trade that this book most enlightened me. One hears a great deal about slavery in the West, but apparently the Arab slave trade was just as great, much older, and lasted much longer, involving (according to some reports) almost a HALF MILLION people a year throughout the late nineteenth century. This seems to have been anecdotaly true. For example,


Wade Safeni, his coxswain and translator on Lake Victoria, told him that eight years previously this whole region 'was populated so thickly that we travelled through gardens and fields and villeages every quarter of an hour.'Today, this same country was very sparsely populated.

I did not know that most slaves were sold into slavery by their neighbours. Stanley is always haranguing villages, who explain on many occasions: "It is the fault of the Arabs who tempt us with fine clothes, powder and guns." Depressing. Also depressing are Stanley's repeated attempts to ransom away at least the children when he meets slavers.

We tend to look down on the Victorian relationship with Africa as self-evidently racist and wrong, compared to the current world view, lit as it is by the light of SOAS. The author makes a very interesting case that in fact the British that stopped the Arab slave trade, at vast expense, and to the loss of many sailors' lives - in large part, though not solely, because they thought it was the right thing to do. He contrasts this with the current lack of involvement in Rwanda, Darfur, etc etc. This is I think a useful corrective to the Victorian bashing that is currently fashionable.

Eventually Stanley, who sounds very gay to me, did manage to get married. Unfortunately, his wife was a town mouse, commenting piteously: "I want to see hansom cabs, omnibuses, and 'extra specials' running, and handsome policemen, and the jostling multitude. I only put up with trees." And so his African adventures came to an end.

Just as a side point, its interesting to note what made Stanley so tough. In addition to having survived the brutality of the workhouse, Stanley also survived one of the worst slaughters of the American Civil War, the battle of Shiloh. Terribly sadly, his seventeen year old friend was killed, who had marched into battle “with some violets in his cap, hoping that the enemy would take that this for a sign of peace and not kill him” Stanley commented later “I cannot forget that half-mile square of woodland . . .Only thirty minutes sufficed to drive out all that we had ever heard of goodness, love, charity, all memories of church, God, heaven”

The novel NIGHTMARE ABBEY does not have much of what you might call a plot, though it does have a great name. When I am stupidly rich and live in a big house, this will definitely be on the name shortlist.

Essentially, it is a sort of gothic sartire on the romantic movement, and in particular on the love of the morbid. As I don't know much about this movement, if was hard to find it funny. I suppose it is how Kardashian jokes will be in a hundred years. Okay, five years. Okay, next year.

However, there are glimmers of how funny it could have been, had only I been alive two hundred years ago. Speaking of young men:

" . . . when they should be brought out of the house of mental bondage--i.e. the university--to the land flowing with milk and honey--i.e. the west end of London."

Or here's a poet on writing:

Modern literature is a north-east wind – a blight of the human soul. I take credit to myself for having helped to make it so. The way to produce fine fruit is to blight the flower. You call this a paradox. Marry, so be it. Ponder thereon.

Love Peacock also has a great name himself. Maybe that can be my pop star name. I know this is becoming a bit of a theme in this blog, but I am once again weirdly touched by Wikipedia's description of the life of eighteenth century writers' lives:


In his retirement he seldom left Halliford and spent his life among his books, and in the garden, in which he took great pleasure, and on the River Thames.

THE VICAR OF WAKEFIELD by Oliver Goldsmith 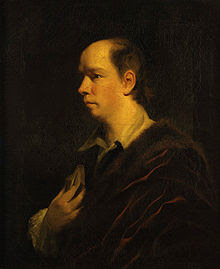 This novel was written in 1766, just at the dawn of the novel form, and it certainly shows. The charming, completely unbelievable central story, of a vicar and his family, is constantly interrupted by an array of other forms: the ballad; the sermon; the religious argument; and, what the hell, let's have another ballad again.

The story - when you can see it for the ballads - is focused on the vicar's evil landlord, and his cunning and successful plan to seduce and then abandon one of the vicar's daughters. This prostrates the vicar, which I didn't quite understand, as he seems to not put much stock in his daughters. In the early stages of the book, when one of the girls claims she had read enough to join in one of the (eternal) religious arguments. The vicar finds this hilarious, and responds:

"Very well . . . . that's a good girl, I find you are perfectly qualified for making converts, and so go help your mother to make the gooseberry pie!"

I'd like to shove the gooseberry pie down his stupid throat: screaming 'Dorothy Parker! Virginia Woolf! Joyce Banda!'. When the unfortunate girl is gone, he mourns her in the most touching manner:

"The honour of our family is contaminated . . . had she but died!"

However much of the book has a certain moral charm, and is full of wise advice:

and, the last line of the book:

This high moral tone is interesting, because apparently Goldsmith himself was a notable gambling addict, and only barely graduated from his theology degree: "his education seemed to have given him mainly a taste for fine clothes, playing cards, singing Irish airs and playing the flute." This makes him sound like rather a fun guy and makes me regret my misspent university days, which I mostly used for studying.

Let's end with this lovely description of the vicar's wife, in an argument:

The dispute grew high while poor Deborah, instead of reasoning stronger, talked louder, and at last was obliged to take shelter from defeat in clamour.

I love that. It's practically been worth all the ballads, just to get to that one line.
- June 06, 2012 No comments: Links to this post