ANY HUMAN HEART by William Boyd 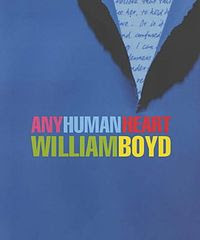 This is an ambitious book, attempting to cover a whole long life, spanning much of the twentieth century, by means of a personal diary.

The book begins with Logan Mountstuart as a teenage boy, and the adolescent voice is captured extraordinarily well.

Went for a walk through Edgbaston, already consumed with boredom, and looked in vain at the big houses and villas for any sign of individual spirit. The Christmas tree must surely be the saddest and most vulgar invented by mankind. Needless to say we have a giant one in the conservatory, its tep bent over by the glass ceiling.

I know, we have had teenage boy comedy angst done well before (Adrian Mole et al), but just because it's not original doesn't mean it isn't funny.

Logan attends Oxford in the 1920s (I know, we've had that novel several times as well), and dreams of being a writer (ditto). The girl he wants to marry him refuses, so he asks another, who turns out to be quite the wrong kind of woman for him. He has some minor literary success. He gets divorced. He develops a drinking problem. And so on and so forth through the twentieth century, including two more marriages, a successful book, a failed book, many magazine articles, Paris, Barcelona, the Spanish Civil War, solitary confinement in Switzerland in the Second World War, more drinking, running a gallery in New York, and etc. We may have had all of these novels too, but not all at one go.

What impressed me most was the ever changing narrative voice, as Logan ages. This I think is real feat on Boyd's part. The diary breaks off for years, on occasion, and then restarts, and yet somehow you are always interested and engaged and turning the page, even when it really should be bed time, which is I think a real achievement in terms of engaging storytelling. It's also interesting to see how the world changes over his life, as it will over all our lives if we are lucky enough to live so long. Here is he on his early life in Paris:

Mine was a generation that unreflectingly went to prostitutes, almost in the same way as one would go to the theatre.

There is a lot about the experience of visiting prostitutes in this book, which made me think about the fact that I can name countless accounts I have read of that experience and yet can think of virtually none describing what it is to be a prostitute. I guess that's not a newsflash: poor women don't have time to write.

Of most interest to me in the end in this book was the conclusion, where he is old and poor and living on dog food. First of all, it scared me. I don't want to ever have to contemplate pet food! But then he moves to rural France, to work on what he plans to really be his great novel, and is always talking about it in the diary. He has a much happier life in France with the local community, and is found dead and smiling in the back yard with a bottle of white wine by his side. No trace of the book can be found, and his gardener explains that he helped him burn a huge pile of papers, very cheerfully, the week before. It was really very touching. You think the novel is going one way: you are reading the life of Logan Mountstuart, famous author; then you realise you have been reading life of Logan Mountstuart, ordinary guy.
- July 13, 2012 No comments: Links to this post