THE WAY WE LIVE NOW by Anthony Trollope 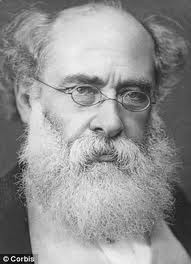 I felt a powerful need of the infinite consolation of Trollope. And infinite is the word, as this, his longest novel, is a stonking 800+ words. They pass by in a minute. I can’t believe it’s already over.

Admittedly, it was a long, fairly complicated minute, with multiple plots and a huge swathe of London life all crammed in there. In a sign that THE WAY WE LIVE NOW is in fact the way we still live now, the central character, Mr Melmotte, is running a massive Ponzi scheme. His daughter, initially meek, falls in love with a useless chap Felix Carbury, and tries to run away to New York with him. Meanwhile Felix’s sister Hetta is loved by her forty-something cousin Roger, but she is unfortunately in love with Roger’s best friend, Paul, who is unfortunately engaged to an American, Winifred Hurtle, who once shot a man in Utah, who - you get the picture.

I don’t know what is about Trollope that is so soothing. I think it is in part that his stories are long, and neatly crafted, and you can rely on them to take you away from your long and apparently bad crafted life. It’s also his great moral surety, which I’m not sure anyone in our culture has been able to enjoy since the Somme.

Take this, where he is discussing Paul’s unwillingness to break up with Mrs Hurtle, when he realizes the engagement is a mistake:


In social life we hardly stop to consider how much of that daring spirit which gives mastery comes from hardness of heart rather than from high purpose, or true courage . . . The master who succumbs to his servant, is as often brought to servility by a continual aversion to the giving of pain, by a softness which causes the fretfulness of others to be an agony to himself . . . There is an inner softness, a thinness of the mind’s skin, an incapability of seeing or even thinking of the troubles of others with equanimity, which produces a feeling akin to fear; but which is compatible not only with courage, but with absolute firmness of purpose . .

I know I've mentioned this before, but I still can't get over that he wrote all these novels while working full time at the post office.

LOVE IN A COLD CLIMATE, THE BLESSING, and THE PURSUIT OF LOVE by Nancy Mitford 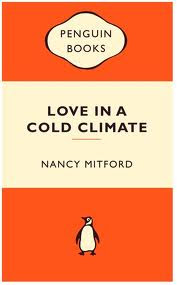 Nancy Mitford was one of the Mitford sisters, infamous between the wars in England for their eccentricity and - for a least one of them - their fascism.

Nancy was not the fascist; instead she is a rather fine and very funny novelist. These three novels are about a large family, and the love affairs of various of the women in the family.

It is SO FUNNY:


The great advantage of living in a large family is that early lesson of life’s essential unfairness.

And also, as you can see, true.

Early on, you think you are just hearing a normal conversation between two children about a trip abroad, then you get: "Perhaps you won’t be alone,' I said. 'Foreigners are greatly given, I believe, to rape."

And here’s a pencil sketch of an uncle’s experience in the Boer War: "Four days in a bullock wagon, he used to tell us, a hole as big as your fist in my stomach and maggoty! Happiest time in my life."
And

His general attitude to what he called the man in the street was that he ought constantly to be covered by machine-guns: this having become impossible, owing to the weakness in the past of the great Whig families, he must be doped into submission with the fiction that huge reforms, to be engineered by the Conservative party, were always just around the corner.

It’s most interesting to read a woman who is writing right at the beginning of women being able to express themselves, and provides a startlingly counterpoint to twentieth century male fiction.


I have often noticed that when women look at themselves in every reflection, and take furtive peeps into their hand looking glasses, it is hardly ever, as is generally supposed, from vanity, but much more often from a feeling that all is not quite as it should be

Here is a young woman talking about a happy mother:


It was her sixth child and third boy, and we envied her from the bottoms of our hearts for having got it over.

And here is her view on bringing up your child without staff:


I have seen too many children brought up with Nannies to think this at all desirable. In Oxford, the wives of progressive dons did it often as a matter of principle; they would gradually become morons themselves, while the children looked like slum children and behaved like barbarians.

And on the joys of marriage


But of course I had already dived over that verge and was swimming away in a blue sea of illusion towards, I supposed, the islands of the blest, but really towards domesticity, maternity, and the usual lot of womankind 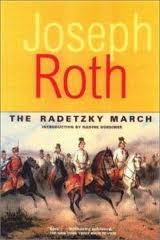 In the Introduction, Roth’s work is discussed thus:


. . . his pervasive theme, the relation of the individual to the state. He says his characters are not “intended to exemplify a political point of view – at most it (a life story) demonstrates the old and eternal truth that the individual is always defeated in the end.

Sounds right up my alley. Also, many people have recommended this book to me. Thus I am disappointed to be disappointed.

The book tells the story of a young man from a military family, whose own career is less than illustrious. It’s less than illustrious in large part because he keeps making bad decision, barely thought out, and acting as if some sort of automaton, not thinking about his actions. One cmes across these sorts of characters all the time in serious twentieth century fiction, and I strongly suspect this is supposed to be some sort of comment on the human condition. However I just find it annoying. I want to give him a slap and tell him to take some responsibility for his life. His father’s story is interwoven with his, and is the most touching part of the tale. His butler, who he rarely speaks to but has been with him for forty years, dies, and the grim and authoritatian man begins to unravel

Some parts of the novel are beautiful, as here:


. . feeding the swans, trimming the hedges, guarding the springtime forstyhias and then the elderberry bushes against unauthorized, thievish hands, and, in the mild nights, shooing homeless lovers from the benevolent darkness of benches.

And some parts very funny:


He thought about his mother: her life was one long frantic search for some kind of extra income.

And sometimes dodgy/gross. Here is an older woman feeling motherly towards her young lover:

. . . as if her womb had birthed him, the same womb that now received him

I wonder if some of my trouble comes from the translation. We had “luscious clods of soil,” which worried me, but I could believe that might be right; then we had “spacious cups of tea,” which I very much doubt, then someone is the “spit n image” I mean surely someone with English as a first language works at Penguin and could have run their eye over it?