MEMOIRS OF A DUTIFUL DAUGHTER by Simone de Beauvoir

I became familiar with the private life of Simone de Beauvoir about a decade ago when I read the three volumes of the Sartre’s letters to her. I know these two are central figures in the existential movement, which redefined modern consciousness, etc etc, but what I really got from his letters was that Simone really needed to break up with Sartre. They were having an ‘open’ relationship, allegedly, which mostly just involved Sartre sleeping with lots of skanks and describing it to her in dreadful detail, e.g., her pubic hair was brown, (I am not exaggerating). Oh GOD Simone. Break up with him.

Anyway, this memoir covers her early life. To learn how she was brought up, in what a conservative and repressive environment, makes you all the more amazed that she managed to become who she was: a central figure in twentieth century thought, and, incredibly SINGLE. Take her father’s compliment to her: Simone, he said, you are fit to be a companion to a hero. Wow.

The young Simone loves Jo, the independent hero of LM Montgomery’s LITTLE WOMEN. I found this quite charming, as lots of studious spotty girls have loved Jo. There’s something very charming about LM Montgomery reaching out to Simone de Beauvoir, who reaches out to us today. It’s the thin line of smart and overly serious girls through history.

She graduates from pleasure reading to very serious philosophical reading, attending the Sorbonne. Simone and co. were just on the verge of developing that godless cosmology which has given birth to our tired, cynical LOLcats age, but they still worked on it in the spirit of their times, which a tireless and touching optimism, totally foreign to us today.

Here she is on socialists: I thought the word had an evil ring; a socialist couldn’t possibly be a tormented soul; he was pursuing ends that were both secular and limied: such moderation irritated me from the outset

. Or on her boyfriend, who is not sure what to do with his life:

Afterall, I told myself, I have no right to blame him for an inconsequence which is that of life itself: it leads us to a certain conclusions and then reveals their emptiness

There are glimpses of the later, letter writing Simne with whom I am familiar. Here is a man off to the war, and leaving her his favourite clock for safekeeping. She barely knows this man, and he confesses, apropos of nothing:

. . .he was a Jew, an illegitimate child, and a sexual maniac: he could only love women weighing more than fifteen stone.; Stepha had been the one exception in his life: hehadhoped that, despite her small stature, she would be able to give him, thanks to her intelligence, an illusion of immense size. The war swept him away; he never came back for his clock.

He was still young enough to feel emotional about his future whenever he heard a saxophone playing after his third martini.

Clearly I am still young, I feel emotional about everything after just one martini. Maybe I’m not young, just a lightweight.

Also touching is Simone’s friendship with Zaza, a girl she met in high school, who renamed her friend throughout her early life, fighting with her a brave battle against family and society. Zaza dies of meningtius, which Simone believes is exacerbated by her battle against her family’s marriage plans for her. The last line of the book is a tribute to her:

She has often appeared to me at night, her face all yellow under a pink sun-bonnet, and seeming to gaze reproachfully at me. We had fought together against the revolting fate that had lain ahed of us, and for a long time I believed that I had paid for my own freedom with her death.

The battles of these early feminists puts into rather harsh relief women today who can’t even face having a little argument with their own husbands about having to do the dishes. Nice work, twenty first century ladies.

This novel begins with an elderly lady deciding to get married, and broadly follows the impact that this has on her immediate family. I found this to be a very carefully executed and tightly edited modern novel, so well-behaved as to be entirely forgettable.

I use my Kindle to note interesting passages or ideas in books, and it’s rare for me not to find any at all in a book; but I’m afraid that this was case here, and I don’t think it’s just because I read it on a 17 hr drive from Cape Town to Joburg. It found the family dynamic to be entirely ordinary, the arc predictable, and the themes old hat. I almost feel bad to take such a dislike to a book so ordinary. 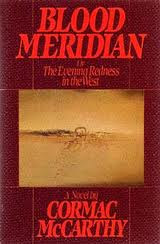 I’ve read and loved ALL THE PRETTY HORSES and THE ROAD. The latter I finished in tears as the bath water cooled around me. In this case, third time is apparently not the charm because I found BLOOD MERIDIAN a disappointment.

I suspect this is because I can now see the book as part of a pattern of the author's interests. It is set in the American West, and is about a group of men who ride out to kill some other men. Just like THE ROAD and ALL THE PRETTY HORSES were about men on a quest to kill other men. Two are sort of horse related, one more cannibal related, but that’s the basic MO. It's violent, everybody's silent, everybody's men.

I guess I found it sort of dull. I mean just try this:

They rode in a narrow enfilade along a trail strewn with the dry rounds of turds of goats and they road with their faces averted from the rock wall and the bake-oven air which it rebated, the slant black shapes of the mounted men stenciled across the stone with a definition austere and implacable like shapes capable of violating their covenant with the flesh that authored them and continuing autonomous across the naked rock without reference to sun or man or god.

The choice of the word ‘enfilade’ was the one that cracked this camel’s back. I mean REALLY, CORMAC MCCARTHY REALLY? Do you really need to use a shooting term for describing people walking in single file? And when I say people, I mean men. Because Mr McCarthy sure as hell is not interested in women. I can’t recall off hand any women in these books, but if they do exist and I’ve forgotten I bet you any money they are rape victims.

There were still beautiful bits.

The floor of the playa lay smooth and unbroken by any track and the mountains in their blue islands stood footless in the void like floating temples.

I love that about the mountains. I can hardly look at them anymore without hearing that line.

What makes me especially sad is that I think this may have ruined THE ROAD for me, which was previously one of my favourite books. It’s no longer a great book about meaning in the face of adversity, but rather some plump middle aged man sweating out his fantasies. 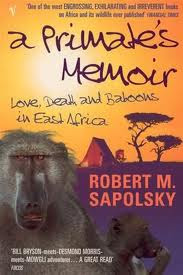 A PRIMATE’S MEMOIR is an account of the many years the author spent studying a particular troop of baboons in the Masaai Mara.

Sapolsky is at his best when recalling his baboons. Much of his work entails watching their behavior over very long periods, and so he develops a real – and possibly not very scientific – fondness for individual baboons, and is deeply affected by their fate. I had no idea baboons had such complex social lives, or such different characters, and I can understand how he came to be so involved in their private lives. It made me feel bad about eating meat.

The author also spends much time discussing the people he met during his long periods in the bush, and the strange vacations he took to such holiday destinations as Uganda (immediately after the fall of Idi Amin) and rural Sudan. Often this is very interesting, as Sapolsky just caught the end of an Africa now largely lost. Thus, for example, when he talks about double story buildings to the Masaai, they consider them as simply a village upon a village, and wonder what happens when the cows in the upper village urinate – does it hit the heads of those below?

Sapolsky is a very funny writer, with a great love for and knowledge of the African bush. He is on less certain ground when he speaks of the African people. He seemed to me to be frequently exoticising those he met, and occasionally stereotyping them. Thus, one character is described as having ‘bantu stoicism’ while white people are routinely referred to as ‘colonial whites’. At least its equal opportunity offense, to Africa’s majority and minority alike; and it didn’t bother me too much as I just skimmed those bits, to get back to the baboons, whose society he actually knows something about.