CREATION: DARWIN, HIS DAUGHTER AND HUMAN EVOLUTION by Randal Keynes

After his round the world voyage on the Beagle, Charles Darwin spent the next forty years in his suburban home with his family, and it was there that he did the real intellectual work that made him famous and changed the way we see the world. CREATION tells the story of this period.

The Darwin family was close and loving, and much of the appeal of the book lies in an account of their ordinary lives. Darwin is thrilled by the birth of his first child, writing to a friend in the manner of all new parents: “He is a prodigy of beauty and intellect. He is so charming that I cannot pretend to any modesty. I defy anybody to flatter us on our baby, for I defy anyone to say anything in its praise, of which we are not fully conscious.” However, he also takes the opportunity to examine genetic inheritance in action: he was “always anxious to observe accurately the expression of a crying child . . . though his sympathy with the grief often spoiled his observation.”

Darwin spent many years studying barnacles, in his study, and one of his sons “ .. . when they went one day to play with the Lubbock children at High Elms, asked where Sir John (the father) did his barnacles” The nanny, Brodie, famously once said “it was a pity Mr Darwin had not something to do like Mr Thackeray (the author). She had seen him watching an ant heap for a whole hour” Darwin’s great love of his subject, be it barnacles, ants, or other, shines through the book. He comments charmingly: “I am at present red-hot with spiders; they are very interesting, and if I am not mistaken, I have already taken some new genera”

Darwin’s oldest daughter, Annie, dies of ‘fever’ (probably TB) at the age of ten. This death was particularly important in disabusing Darwin of a belief in a benevolent god, and gave him more impetus to pursue his ‘godless’ view of evolution.

“treadmill of pregnancy, delivery, suckling, weaning and waiting for the next conception. After bearing her fifth child, she wondered if she might have 'the luck to escape having another soon,' but Charles did not seem to have appreciated her feelings. She was pregnant with the sixth a few months later."

This is really, really, unattractively Taliban of Darwin. Mrs Darwin must have been totally psyched to menopause.

I confess, I didn’t quite finish this book. It got a bit boring and blah-blah-blah towards the end. The author is the great grandchild of Darwin, and this is his only book, and it shows. I suspect I'd much rather read a book by someone who came to Darwin through great love, than through luck and inheritance. This is why I like Paris Hilton. She could just have relied on her family money, but she went ahead and at least she made something of herself, even if that something is sort of horrifying.

THE LINE OF BEAUTY by Alan Hollinghurst 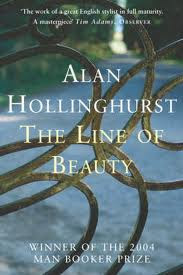 Stop the presses, it's a Booker winning novel that isn't crap! I'm amazed. It won in 2004, so maybe back then they were still awarding actual good novels, and since then it's been getting gradually more pretentious.

THE LINE OF BEAUTY tells the story of a middle class young man named Nick who after attending Oxford moves into the family home of one of his wealthy classmates. He lives there for some three years, and the novel follows his time with them. It traces two romances: his romance with his idea of the upper classes, and his exploration of gay life in London.

It's immediately absorbing, with everything seen through the lens of Nick, who is a highly sensitive, highly self absorbed young man. It's also immensely well observed. Here is Nick leaving a party: "He waited a minute longer, in the heightened singleness of someone who has slipped out for a minute from a class, a meeting, ears still ringing, face still solemn, into another world of quiet corridors, the neutral gleam of the day."

It's also Victorian in the exuberance and detail of its characters. There's Gerald, the father of the family he's living with who knows the "price of nothing but champagne and haircuts," (this is definitely a goal I have), or Lady Partridge, a family friend, who examines what Nick is reading with "the mocking contentment of the non-reader." I also enjoyed the gentle influence of the Victorians in the moral voice of the narrator. (For example, Nick at favourite cruising spot " preened in pardonable ways" we are told)

There's some awkwardness when the book bounces ahead a number of years, but Hollinghurst manages to resolve the book's arc neatly and satisfyingly. A great book, that while very long is over far too soon.

THE WORLD ACCORDING TO GARP by John Irving

Sometimes you begin a novel and immediately feel comfortable. You know right away that this novelist understands the importance of plot, of interesting characters, of climax and resolution. For some readers, this will mark him out as a second rate. Some readers, clearly on a different intellectual plane to mine, feel that the truly quality novel should require more effort to read than it took to write – that is, be plotless and boring.

THE WORLD ACCORDING TO GARP has plot galore. It begins before Garp’s birth and follows him through childhood to his career as a successful writer, to his murder at the hands of extreme feminists. It’s absorbing from the first page. Occasionally Garp’s short stories are inserted in the text, which usually is for me - like dreams - something to be skipped. However so able is Irving as a writer that he manages to mix these fictional fictions with his fiction and still keep the arc going. Amazing.

An important theme of this novel is the impact of feminism on American society. One realizes, when seeing how hard Irving has to work to engage with feminism, how central the oppression of women was to the functioning of that society. It’s hard to understand now, from our perspective, all this agonizing; and it’s an interesting counterpoint to the last book I read, Simone de Beauvoir’s MEMOIRS OF A DUTIFUL DAUGHTER, which is about the very birth of feminism.

Garp, in a typical male-author-of-the-70s kind of way, is happy in his marriage but still has a bunch of stupid and mildly gross affairs (babysitters etc). This is not a very successful part of the novel. I think that certain experiences of certain demographics should be considered as having been entirely described. Certain authors have entirely covered certain areas in detail, and should be considered as owning those areas. Eg: unemployed families in the Midwest during the Great Depression (Steinbeck; childhood in France at the end of the nineteenth century (Proust – take note de Beauvoir). Unfortunately, adulterous men in late twentieth century America is John Updike, not John Irving, I’m afraid.