HALF A LIFE by VS Naipaul 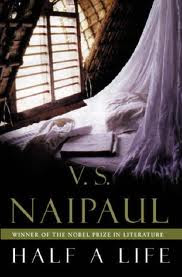 This book tells the story of a young man from India who has a difficult relationship with his father, and who goes to England to study. This emigration was clearly a deeply formative event for Naipaul in his own life, and he writes about the cultural disjunction with sympathy and insight.

In England, receives a letter from a girl from southern Africa in response to some stories he has published which goes as follows:


At school we were told it was important for us to read, but it is not easy for people of my background I suppose yours to find books where we can see ourselves. We read this book and that book and we tell ourselves we like it, but all the books they tells us to read are written for other people and realy we are always in somebody else’s house . . .. .

He decides to marry her and move to Africa with her. He explains that in some way he simply trusts her:

. . .if you are not used to governments or the law or society or even history being on your side, then youhave to believe in your luck or your star or you will die.

After twenty years or so, which are passed over cursorily, he decides he is tired of her and leaves again for Europe.

I found much of this book in fact to be strangely cursory, a sort of half sketching out of half a life. In traditional Naipaul fashion, the energy only really picks up once he starts being creepy about women. Here is as a student visiting a prostitute, one of very few detailed scenes in the book:

He didn’t consider her face. He just followed her. It was awful for him in the over-heated little room with smells of perfurme and urine and perhaps worse. He didn’t look at the woman. They didn’t talk. He concentrated on himself, on undressing, on his powers.

I find it deeply hilarious when he says ‘it was awful for him,’ as if the woman is having a great time. It’s fascinatingly self-absorbed and unself-conscious. You wouldn’t think it could get any worse, but wait till he starts visiting prostitutes in Africa. These encounters are pretty much the only vivid recollections he brings of his twenty years on the continent. He is introduced to this world by an overseer, who assures him that in Africa eleven year olds enjoy being sexual active and that there is no such thing as underage. Here he is:

Take that little girl we just passed. If you stopped to ask her the way she would stick up her little breasts at you and she would know what she was doing.

So part lovely evocation of fractured modern identity; part Prostitutes I Have Known, it’s VS at close to his worst.

This is a hymn not so much to London as to one corner of London. In this way, it is a book deeply of that city, because no one actually lives in London; one lives in Clapham, or Peckham, or Dulwich. The horrible oppression of the tube keeps London separate and small.

NW tells the story of two women who grew up on a council estate together, and follows them through a few months in their mid thirties. It’s centrally concerned therefore with the issues of one's thirties, and in particular the question of children. One of the women has already had children, and the other has told everyone she is ‘trying’ – in fact, she is secretly on birth control. Here is her perception of a group of mothers she is at a party with:

. . . women for whom trying is half the fun and ‘you’re next’ does not sound like the cry of a guard in a dark place

She herself is not sure why she is unwilling to procreate

The novel is engaging and well-observed, but it does have some unfortunate ‘modern novel’ tendencies. I’m sorry to have to tell you that we do :
-randomly jump around from character to character
-have a character become deeply anxious about a minor event in a lame thematic way
-becomes horribly poetic for no reason:

Thing that has apples on it. Apple blossom.

So symbolic. Network of branches, roots.

-totally fail to resolve . This is partly a function of the fact that we jump around so much, but it also on a larger level a failure to handle the child theme. At the end, at a climactic moment, a woman embraces her child, and there is some nonsense about how holding her child makes it all worthwhile, it’s beyond words, etc. I mean: seriously? After all that intelligent discussion of the problem, that’s what you’ve got?

Having said that, it gave me much to think about. How’s this, about lending someone thirty pounds to visit their sick mother:

But already the grandeur of experience threatens to flatten into the conventional, into anecdote: only thirty pounds, only an ill mother, neither a murder nor a rape. Nothing survives its telling

Now I don’t know what she’s on about here. For me the anecdote is often better, richer, and truer than the actual lived experience, which is just a pale shadow of my story about it.