THIS IS HOW YOU LOSE HER by Junot Diaz 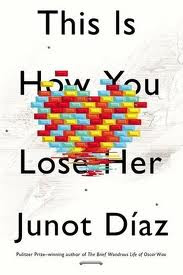 Like Edith Wharton, Junot Diaz is clearly working through some powerful personal issues. Almost every single one of these stories is about regret for infidelity, and is full of a kind of steaming pain, while also being strangely hilarious.

Here, for example, is a brilliantly funny line that I've been thinking of often: "Show me a beautiful girl and I'll show you someone who is tired of fucking her." Or he is here on his mother: "My mom wasn't the effusive type anyway, had one of those event-horizon personalities - shit just fell into her and you never really knew how she felt about it."

Regular readers of this blog may recall my great love for Diaz's last book THE BRIEF AND WONDROUS LIFE OF OSCAR WAO, which gave me an entirely new understanding of the possibilities of writing for us confused people of the diaspora. I did not enjoy THIS IS HOW YOU LOSE HER as much as OSCAR WAO - perhaps because I am not fond of short stories - but I still enjoyed his immensely contemporary voice. Here he is for example, on his mother's friends, who encouraged her to hate his brother's girlfriend: "They could have moderated things a little, don't you think, but they were, like, Fuck that, what are friendships for if not for instigating?" I just love the punctuation around like, I love the sentiment, I love the don't you think.

That said, I did start to find the obsessive concern with infidelity a bit dull after a while, especially in the last story, which is all about a professor in Boston (very like Diaz) who is busy being miserable about fucking around on his girlfriend. I know it's charitable, but I started to feel like: dude, get a grip; and my love of his literature wobbled a little. 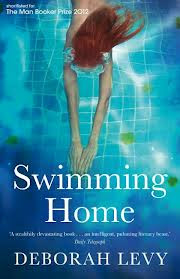 According to reviews, this novel bridges the gap between poetry and narrative. Clearly, I thought I was going to hate it. The introduction did not help; speaking of Levy, the writer says:

". . she was a writer as much at home within the fields of visual and conceptual art, philosophy and performance as within that of the printed word. She'd read her Lacan and Deleuze, her Bartes . . Like the emotional and cerebral choreographies of Pina Bausch, her fiction seemed less concerned about the stories it narrated than the interzone (to borrow Burrough's term) . . . "

Oh god! "Less concerned about stories," as if that makes you a better writer! GOD. i am glad I did not give up however, because SWIMMING HOME turns out to be rather a lovely novel.

It tells the story of a family who arrive for their vacation in a rented house in France to find another lady there, who says she has confused her dates, and thought she had the house rented. They invite her to stay, and it slowly becomes clear that the lady is in fact there because the father in the family is a famous poet, with whom she is in love. The lady and the poet have a sort of melancholy half-baked affair, and the story ends rather sadly. It's an interesting plot, with really gorgeous writing. Here is the lady and poet on the way to a hotel:

As they strolled down the Promenade des Anglais in the silver light of the late afternoon, it was snowing seagulls on every rooftop in Nice. She had casually slung the short white feathered cape across her shoulders, its satin ribbons tied in a loose knot around her neck.

And here they are in the elevator up to their hotel room:

She stared at the multiple reflections of Joe's sweating arm around her waist, the green silk of her dress trembling as they saild silently in the lift that smelt of leather to the third floor.


The book has some light hearted moments, also, as when the poet becomes annoyed with a friend who is acting horrified about someone else's behaviour. The poet says: "It's rude to be so normal, Mitchell," which I found strangely hilarious.

What most impressed me was the author's ability to weave the various poetic elements in and out of the story, with multiple complex repetitions, in a way that seemed entirely natural and in service to the plot. Really remarkable writing. 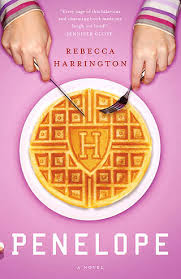 This is a book about the Harvard experience by someone recently graduated from Harvard. It begins well; here is the first description of the central character: "Penelope Davis O'Shaunessy, an incoming Harvard freshman of average height and lank hair," which I found entertaining.

Thereafter, it goes down hill. That period of early adulthood has been covered, and covered well (BRIDESHEAD REVISITED, OF HUMAN BONDAGE, etc etc and ETC), so if you're going to do it you better have something new to add. Unfortunately PENELOPE does not. It's such a basic story, with such routinely 'comic' moments, that after a while I started to wonder if there was some much larger joke that I was missing.
- March 02, 2013 No comments: Links to this post