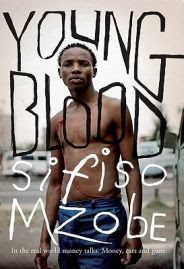 I am now way, way, behind on this blog. As a result, I must tell you now I will not be able to do YOUNG BLOOD by Sifiso Mzobe full justice, despite the fact that it is an interesting debut novel with a distinctive voice, as I read it months ago.

As I vaguely recall, YOUNG BLOOD follows the story of a young man in Durban’s townships, who, failing at school, allows himself to be drawn into the world of car theft. A initially innocent young soul, he is, in the fine tradition of such novels, very soon in way over his head, and learning moral lessons left right and centre.

The story is by turns boring (drink-sleep-do small time drugs) and terrifying (stealing cars, bribing police, etc); which is I suspect very much what it is like to be a small time car thief.

Much of the writing is quite charming; here is a sample: “The love affair between Mandrax fiends and housebreaking is age old. There is nothing more unreliable than a Mandrax fiend, except perhaps Durban December weather.”

This last part, about Durban weather, encapsulates much of the local charm of this book, which vividly captures a part of South African life that is not well documented. At the end, the central character is redeemed by returning to school, which twist I did not believe for a second; but this was still a worthwhile little book, about a small section of South African society.