CONFESSIONS OF SHOPAHOLIC by Sophie Kinsella 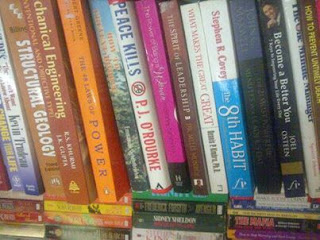 As you can see, it's dark days here at WHITE WHALE. I'm trying not to panic, but I'VE LOST MY KINDLE. And I've been travelling a lot, so it could be in any one of three countries. It wouldn't be the end of the world, except I'm stranded in the literary wasteland that is the Abuja Hilton. A sampling of my choices is in the picture here. Inspirational business books, introductory primers on weird subjects, vanity project histories of Nigeria.
I would almost start to consider the inspirational business books, but really: I have total contempt for people who read inspirational business books. It's one of those things when glimpsed on someone's lap on a plane, or on their bookcase, consigns them immediately to always being an acquaintance, never a friend. Thus, this current book. When that's all that's on offer, CONFESSIONS OF A SHOPAHOLIC starts to look pretty good.

And actually, it was okay. It was quite readable and entertaining, though clearly the author has very little respect for the reader's intellect or attention span. It was also quite fun to read a novel set in 2000. People spend a lot of time calling each other on landlines, and very little time stalking each other on Facebook.

It did cost some 2500 Naira, which is about $15, and I whisked through it in two days of running on the treadmill. So now I'm back to square one and I still have to live through another five days. I don't think I've been without access to reading material for that long in my entire adult life. I'm trying not to panic. 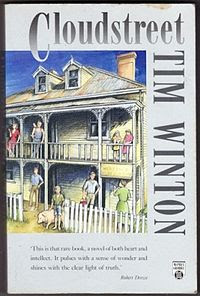 This is a book that is largely made up of fleeting poetic impressions, loosely grouped around a storyline. In other words, I wanted to kill someone while reading it: either myself or Tim Winton, I'm not sure which. Possibly both.

Because on the one hand, I feel bad. It is sometimes very elegantly and beautifully written, and I was sort of interested in the characters, and maybe I am just missing something, as other people seem to like it. On the other hand: OH MY GOD. Just say what you want to say. Not everything has to be shadowed by the strange and wonderful other realities. I can think of many bathroom trips I have made, that were singularly unshadowed. Also, it was rather in the modern vein, in that sorrow and futility were clearly very much on the menu, and speech marks were very much not.

I read to the end of the book, but there's the bit where I gave up, about two-thirds of the way through the book, or at Location 2996 as my Kindle helpfully tells me: "She felt pity and misery and hatred and she knew this was how it would always be. . . What are we supposed to do? he said. I dunno, she said. 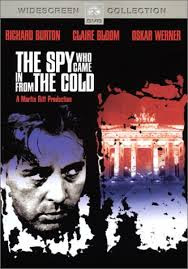 THE SPY WHO CAME IN FROM THE COLD is the victim of its many imitators. It seems today rather cliché: the disillusioned government operative, the brown raincoat, the double (or perhaps it’s a triple) cross, the drinking, the idea that everybody loses: so far, so spy novel. This is a literary world very familiar to me, because my father was a great reader, and a great lover of a certain kind of dog-eared paperback, and I am a veteran of my father’s bookcases. As my parents always let me read just what I pleased, the alcoholic double agent alone in his Berlin apartment was a relatively major feature of my early internal life (no wonder I have problems).

THE SPY WHO CAME IN FROM THE COLD only seems cliché today because it was so massively influential in its time. What it presented was shocking then: international affairs with no goodies and no baddies, and no victory possible. Today, this is the default position of virtually every high schooler; but at that time it was revolutionary, and the book has cast a long shadow over the spy novel ever since.

The story is focused on one Alec Leamas, who is a spy near the end of his career. The book does not quite reveal all to the reader, till right near the end, so I don’t want to spoil it for you; but essentially he accepts a mission which involves convincing the East Germans that he has been fired by MI5, and is now a disillusioned drunk ripe for turning. There a two wrinkles: one, that he actually is a disillusioned drunk ripe for turning, and two, that he falls in love. He travels to East Germany with his new communist handlers, and cross and double cross abound, drawing in his lady love, and ending in a sad non-victory on all sides.

The book is well written and keeps you guessing, and I enjoyed it. Here’s a sample: “The airport reminded Leamas of the war . . Everywhere that air of conspiracy which generates amongst people who have been up since dawn – of superiority almost, derived from the common experience of having seen the night disappear and the morning come.”

Curiously however what I most enjoyed was the Afterword, in which Le Carre talked about the process of writing the book. He was a quite unknown staffer in the secret service at the time: "I had been poor too long, I was drinking a lot, I was beginning to doubt, in the deepest of ways, the wisdom of my choice of job. The familiar process of embracing an institution, then fighting my way clear of it, was taking over my relationship to my marriage and my work"

He was just thirty years old, and interestingly he rapped the book out in just six weeks, the dark world of the novel reflecting his dark internal state. The book was a massive success, and changed his life overnight: "My marriage broke up, I went through most of the withdrawal symptoms that fame instills in writers, even if they pretend it doesn’t. I found a new wise wife and put myself together . . .But of course I will never forget the time when a disgusting gesture of history coincided with some desperate mechanism inside myself, and in six weeks gave me the book that altered my life”

I found it all rather an interesting insight into how one bumbles into life change.