THE WAPSHOT SCANDAL by John Cheever

John Cheever is famous as a writer of short stories, and as I am not much of a fan of the short story, I have long avoided him. I am however increasingly desperate for new books to read, and having decided to start fishing around in the smaller fish of the twentieth century, have pulled him out. This is one of his few novels, and I'm glad I tried it.

The book is the sequel to a novel called THE WAPSHOT CHRONICLE, and tells the story of the grown up children of a family leading their adult lives. It's mostly about relationships, and in true mid-twentieth century male writer fashion, all the marriages are prisons. To which I say, as to my friend Updike: JUST GET A DIVORCE ALREADY AND STOP WHINING

That said, it's very well observed. Here's a shopkeeper : "Now and then he patted his paunch - his pride, his friend, his solace, his margin for error"
And here's a meditation on travel: "Travel has lost the attributes of privilege and fashion. We are no longer dealing with midnight sailings on three-stacked liners, twelve-day crossings, Vuitton trunks and the glittering lobbies of Grand Hotels. The travelers who board the jet at Orly carry paper bags and sleeping babies, and might be going home from a hard day's work at the mill. We can have breakfast in Paris and be home, god willing, in time for dinner . . ."

It's also often weirdly poetic: "What does the sea sound like? Lions mostly, manifest destiny, the dealing of some final card hand, the aces as big as headstones . . . . The sea grass dies, flies like a swallow on the wind and that angry looking tourist will make a lamp base out of the piece of driftwood he carries. The line of last night's heavy sea is marked with malachite and amethyst, the beach is scored with hte same lines as the sky; one seemed to stand in some fulcrum of change, here was the barrier, here as the wave fell was the line between one life and another, but would any of this keep him from squealing for mercy when his time came?"

And here's a obituary I would enjoy: "She had not only lived independently, she had seemed at times to have evolved her own culture"

Dave Eggers, of A HEARTBREAKING WORK OF STAGGERING GENIUS fame adores this book, and comments in the Introduction: ". . . it's hard to believe a man wrote these sentences, and not some kind of freakish winged book-writing angel-beast or something". I'm not sure I'd go that far, but I certainly enjoyed the novel.
- November 19, 2013 No comments: Links to this post 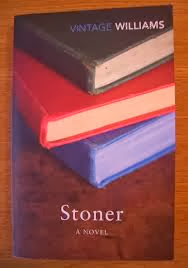 This is a heartbreaking little novel. It's a plain and direct little story that attempts to recount one man's ordinary life in the context of some kind of meaningful framework. In other words, this book could never, ever, ever, win the Booker. Unlike the last book I read, MOON TIGER, which curiously had the same basic materials, STONER attempts to honour the human search of meaning, and suggest that not all such searches are doomed to failure, which obviously makes it profoundly unfashionable.

William Stoner, the title character, is born on a poor farm: "It was a lonely household, of which he was an only child, and it was bound together by the necessity of its toil. In the evenings the three of them sat in the small kitchen lighted by a single kerosene lamp, staring into the yellow flame; often during the hour or so between supper and bed, the only sound that could be heard was the weary movement of a body in a straight chair and the soft creak of a timber giving a little beneath the age of the house."

He is sent by his father to the university, to study agriculture, but once there a sophomore survey course in English literature changes his life, and he decides to become a teacher. The book then follows him through his unremarkable career, his mildly unhappy marriage, and then on to retirement and death. When summarised like that, I appreciate it does not seem like much of a read. But somehow it is such a beautiful account of ordinary troubles, and ordinary courage to overcome them, that it oddly touching. It reminds you that your life is a good deal more than an account of its incidents. Here he is, on his deathbed: "A kind of joy came upon him, as if borne in on a summer breeze. He dimly recalled that he had been thinking of failure - as if it mattered. It seemed to him now that such thoughts were mean, unworthy of what his life had been."

It was 2am by this point, and I was gently drizzling on the sofa, with my face lit up by the blue light of my Kindle. It wasn't just that the story was SOsad/happy, but also because it was so beautifully and simply written. It's so rare to read something utterly unpretentious. I rolled my eyes when I read in the introduction the statement: "The clarity of the prose is in itself an unadulterated joy," but by the time I went to bed I was forced to admit it was an unadaultered joy. It kind of makes you sorry you read it, because you just know the next book will be a disappointment.


Here's the author's view on what the book is about, which I don't quite agree with, but which is interesting none the less:

A lot of people who have read the novel think that Stoner had such a sad and bad life. I think he had a very good life. He had a better life than most people do, certainly. He was doing what he wanted to do, he had some feeling for what he was doing, he had some sense of the importance of the job he was doing. He was a witness to values that are important . . His job give him a particular kind of identity and made him what he was . . .It's the love of the thing that's essential. And if you love something, you're going to understand it. . . . I think it all boils down to what I was trying to get at in STONER. You've got to keep the faith. The important thing is to keep the tradition going, because the tradition is civilisation

Well, here's an eminently forgettable book. It's a Booker winner, and it's entirely in the mould of many Booker winners, ie: it's 'inventive'. It's essentially a straightforward story of one woman's life, but, life not being interesting enough for this kind of literature, the chronology is all mixed up, and a general air of 'poetry' hangs over the proceedings.

The central character has a strong (and for a few months apparently incestuous) relationship with her brother, and upon growing up becomes a journalist. She has a profound love affair with a man who dies in World War II in Egypt, and then goes on to get pregnant by a man she cares less for, but who becomes her long term partner and nemesis.

I'm sort of surprised by the vitriol of the above two paragraphs, as I don't remember hating it so bad when I read it. Some books, such as DEATH OF AN ADVERSARY, I like more in retrospect, than at the time; this book apparently is the reverse. It was not all bad, presenting a kind of interesting picture of a life across decades, and the last paragraph was sort of lovely. Speaking of her hospital room, at the end: "It has the stillness of a place in which there are only inanimate objects: metal, wood, glass, plastic. No life. Something creaks: the involuntary sound of expansion and contraction. Beyond the window a car starts up, an aeroplane passes overhead. The world moves on. And beside the bed the radio gives the time signal and a voice starts to read the six o'clock news."

But overall, I've practically already forgotten I ever read it.