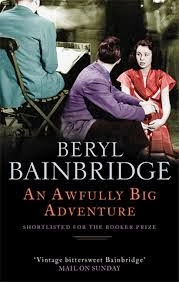 Oh Beryl! Beryl! Here I was all ready to be in love with you and read everything you ever wrote. I very rarely read the same author back to back, or even close together, but MASTER GEORGIE was so wonderful and so short I decided to risk it, and picked up AN AWFULLY BIG ADVENTURE. It's not awful, but it's no adventure, and it's certainly not GEORGIE.

The novel tells the story of a young woman apprenticed to a theatre repertory company in the 1960s. It's a world not so much changed today, and is one I know well. The young woman is in love with the company's director, who is, not amazingly, not interested in women. She engages in an affair with the star of the show (Captain Hook, in a lackluster PETER PAN), and there's a strange twist at the end, which I won't give away, involving this relationship. So it sounds like it should be pretty interesting, right? But it gets bogged down in a sort of heightened poetry that drains it of character of incident.

The gorgeous Bainbridge style is still there, but someone I just don't care. Try:

The dance floor, wreathed in blue smoke, was crowded with revellers foxtrotting to the magnified beat of the paper-hatted band perspiring beneath a trembling canopy of holly boughs and mistletoe

Lush, isn't it? Or this, the description of her first time with the star. Note she had just been in a play about Cleopatra:

It was unusual, that was for sure. She felt a certain sad excitement, a little discomfort and much embarrassment, the latter concerned with the removal of clothing. I am dying, Egypt, dying, her mind gabbled when (her) brassiere fell to the dusty floor. She hadn't been prepared for the way poetry came into this fitting together of parts, Shall I believe that unsubstantial Death is amorous, and that the lean abhorred monster keeps Thee here in dark to be his paramour, she recited in her head, as O'Hara climbed on top and humped her beneath the rude unshaded bulb.

Okay typing this out is making me feel like I liked it. But really I didn't. Sorry Beryl!
- January 12, 2014 No comments: Links to this post 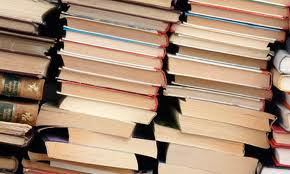 I read 33 books in 2013, which is less than at any time since I started this blog four years ago. It's a quarter of what I read in 2011! Pesky, pesky real life, getting in the way of more important activities. Here's the 33:

HALF A LIFE by VS Naipaul
NW by Zadie Smith
GONE GIRL by Gillian Flynn
MIDDLEMARCH by George Elliott
PERSUASION by Jane Austen
THIS IS HOW YOU LOSE HER by Junot Diaz
SWIMMING HOME by Deborah Levy
PENELOPE by Rebecca Harrington
THE PRIME MINISTER'S CHILDREN by Anthony Trollope
SWEET TOOTH by Ian McEwan
YOUNG BLOOD by Sifiso Mzobe
CONFESSIONS OF A SHOPAHOLIC by Sophie Kinsella
CLOUDSTREET by Tim Winton
THE SPY WHO CAME IN FROM THE COLD by John Le Carre
LET'S EXPLORE DIABETES WITH OWLS by David Sedaris
MR NORRIS CHANGES TRAINS and GOODBYE TO BERLIN by Christopher Isherwood
A PLACE OF GREATER SAFETY by Hilary Mantel
DEATH OF THE ADVERSARY by Hans Kneilson
MAY WE BE FORGIVEN by AM Holmes
THE WAPSHOT SCANDAL by John Cheever
STONER by John Williams
MOON TIGER by Penelope Lively
THE FLAME TREES OF THIKA by Elspeth Huxley
MASTER GEORGIE by Beryl Bainbridge
LOVE, NINA by Nina Stibbe
THE LOVE AFFAIRS OF NATHANIEL P by Adelle Waldman
THE INTERESTINGS by Meg Wolitzer
ROSEMARY'S BABY by Ira Levin
STEPFORD WIVES by Ira Levin
COCKTAIL HOUR UNDER THE TREE OF FORGETFULNESS by Alexandra Fuller
A TALE FOR THE TIME BEING by Ruth Ozeki
CHESS by Stefan Zweig
THE SON by Phillip Meyer

Highlights include STONER by John Williams, which tells the story of the ordinary life of a mediocre university professor. If it's true that simplicity is the most difficult thing to achieve, then this book must have been incredibly hard to write. It is perhaps the simplest, and certainly close to the most perfect novel I've ever read. It made the the three or four novels after it - all quite serviceable - seem hokey and overwritten. Also wonderful was THE LOVE AFFAIRS OF NATHANIEL P, about the dating life of a New York writer, which gave me much to think about and saw me recommending it repetitively and boringly at social events. GONE GIRL by Gillian Flynn also gets an honourable mention, for being a genuinely thrilling thriller. Of course I do not include the Austen or the Elliot here - it's hardly fair to put them into the competition.

Lowlights were HALF A LIFE, with our old friend VS Naipaul even more far gone than ever, with his weird novel involving African child prostitutes, and CLOUDSTREET, which was as complex and baggy as STONER was neat and simple.

For the first time ever, over half the books I read - 17 of the 33 - were by women! This is a big improvement on any year previously. I guess this is pretty obviously because I'm reading more contemporary writing now, and it's only in recent years that women have been able to look up from the cooking/washing/birthing long enough to dream up a plot. 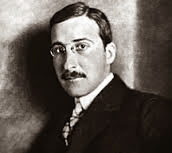 I read this book in honour of being in Austria, as Stefan Zweig in a notable Austrian author. CHESS tells the story of a man on a cruise ship who witnesses a match in which the world chess champion is beaten by an amateur. The amateur then reveals that he was kept in solitary confinement during WWI, and for many months played imaginary chess to keep himself sane. The one match he plays on the cruise ship almost destroys his sanity, taking him back to his old chess mania. There's not much too it, really, being a novella; and I always struggle to enjoy very short books - they are over before you really start to care, like bad relationships.
- January 05, 2014 No comments: Links to this post

THE SON by Phillip Meyer 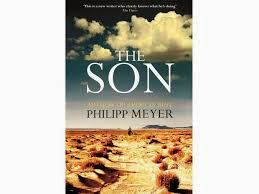 THE SON is a sweeping novel of the history of Texas. It follows three members of a single family across three generations. The only truly successful character is the grandfather. This is largely because his story is by far the most interesting. As a young man he is captured by the Comanches, who apparently frequently adopted captives into their tribe. He is one of them until they are wiped out by the Europeans, at which point he returns to his people, and becomes fabulously wealthy. I learnt a lot about Native American life from his story. As for example, this, on arrows:

The best shafts were grooved along their length. We used two grooves and the Lapan used four. This prevented the arrow from stanching the wound it had just cut, but it also kept the shaft from warping. The blades of hunting arrows were fixed vertically, as the ribs of game animals are vertical to the earth. The blades of war arrows were fixed parallel to the earth, the same as human ribs. Hunting points were made without barbs and tired tightly to the shaft so they could be pulled from an animal and reused. War arrows had barbs and the blades were tied loosely, so that if the arrow was pulled, the head would remain lodged in the enemy's body.

It was also interesting to hear a view of what it must have been like to see the entire society collapse. As the white people don't seem to know anything - about growing maize, or killing buffalo - the Comanche are mystified as to why they are not succeeding in killing them: "Toshaway always said that white women laid crops of eggs like ducks, which hatched every night, so it didn't matter how many you killed."

The grandfather character is also successful because it is told in the straight-forward third person. The story of his son is unfortunately in diary format, which is rarely successful in any novel, and is certainly not so here. In addition, the son is suspiciously modern in his views. Here he is on Mexicans: "Nearly pointed out that we are wetbacks, having swum our horses across the Nueces a century after the Garcias first settled here."

The final character is the granddaughter. Her entire story is a flashback told as she lays dying OH DOUBLE DEAR, IT'S WORSE THAN THE DIARY THING. But I'm glad they managed to squeeze a daughter into THE SON; there is only so much testosterone one can handle in a single book, and this novel is dripping with it. It's yet another of these laments for a lost West, of which I seem to have read a lot recently, which is deeply tied up with mourning for some kind of idea of masculinity, about which I can only say: meh.