THE AFRICA HOUSE by Christina Lamb 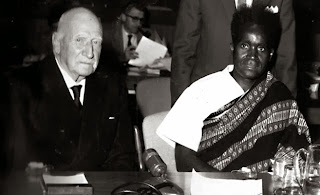 THE AFRICA HOUSE tells the true and bizarre story of one Stewart Gore-Browne, who arrived in Zambia in 1910, fell in love with a lake in the middle of nowhere, and dedicated the rest of his life to building an English country estate there. Over the course of his long life he went from wildly colonial figure – the local people used to lie face down when he walked past; his first act was to shoot a rhino – to someone who Kenneth Kaunda would describe as: “one of the most visionary people of Africa – He was born an English gentlemen and died a Zambian gentlemen.”

The book itself is perhaps not impeccably written – here’s a sample of the kind of cliché you need to wade through: “Above us the equatorial sun beat down from an endless blue sky” – but it’s a very interesting story, and one I found oddly inspirational. This is not so much because Gore-Browne did everything right, but because he really did so many things – packed so much in – and because so many of those things were plainly crazy. He was an original thinker, as many people are, but where he differed from most was in his willingness to actually do what he dreamed. And what he dreamed was pretty crazy: he was going to have a country estate, in the best tradition of the English country estate, in the middle of darkest Africa, by the lake where Livingstone’s dog had recently been eaten by a crocodile.

There were diversions: he fought in the First World War, for example; but he went on with his plan, slowing building an eccentric mansion, and trying to create an estate that might eventually make the place economically self sustaining (orange orchards, perfume oils, cattle: all failures). He loved the place, but he was lonely, and madly in love with a woman twenty years old than him who was unfortunately married. Even more unfortunately, she was also his aunt. Eventually he married a young girl he barely knew, which marriage ended in two children and floods of tears.

Gore-Browne, while never a liberal in the way we would recognize today, understood the local people very well, and increasingly found himself their protector. For example, here he is to a British policeman trying to shut down an illegal shebeen “While you are stuffing your fat faces with beer and chicken and slurping your whiskey sodas, they are surviving on one bowl of watery porridge. And you begrudge them one bowl of millet beer you wouldn’t even let your dog drink!” He knew Kenneth Kaunda, who often stayed at his house, and when Independence came, renounced his British citizenship for Zambian.

He was disappointed to have no role in the state after independence, Kaunda finding him inconveniently white, and he spent his last years alone in his house with his servant and friend Henry. His house now is crumbling, and his son, interviewed by the author, called in a monument to one man’s suffocating vanity. What a whiny little bitch. Children are so uncharitable to their parents. Here’s the end of Gore-Browne’s last letter: “Yes, 84 years are plenty . . . I find my memory is quite childishly feeble now. . . However I’ve had a good life and lots to be thankful for. Henry sends his respectful regards.” This is a great epitaph, and I hope I can say the same for myself at 84. So what that his house is crumbling, and the idea never really worked out. He had a great time trying.

As a side note, here’s a little selection of the handwritten notes I found on the last pages of this book, which I bought in one of Joburg’s many second hand book shops: NO TV ON THE WARD
My bed neighbor ‘hears voices’
4 ward mates have been to Sterkfontein
1 young chap (30) has tried to kill himself 8 times in the last year (certified twice)
FOOD AWFUL
B/fast – warm sweetcorn, porridge awful