ALL THAT IS by James Salter 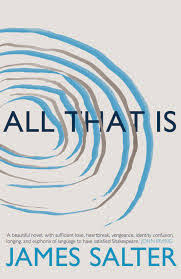 What I think is interesting, is how one book about a man's life can be totally different from another. STONER, one of this blog's favourite books, is all about work and failure; ALL THAT IS is all about sex. Now, my question is, is this a product of the fact that art projects need themes, and so themes are selected; or is it that people's live themselves, inherently, have different themes? I suspect its the latter.

If so, James Salter's theme is sex. Here we go:


"They made love as if it were a violent crime, he was holding her by the waist, half woman, half vase, adding weight to the act. She was crying in agony, like a dog near death. They collapsed as if stricken.

I can only say: half vase?

Sex aside, ALL THAT IS is an entertaining book. It covers the life of a man from his time in the Second World War through to his career in publishing and on to retirement. It's unusual formally, as while it is focused on the central character, it actually very largely a collection of vignettes of his acquaintance, making a sort of kaleidiscope of mid twentieth century America, which I enjoyed and found interesting.
- March 29, 2014 No comments: Links to this post

NORTH AND SOUTH by Elizabeth Gaskell 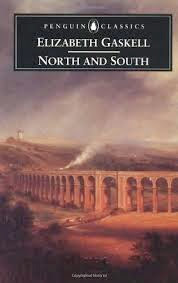 Apparently I have entered the phase of re-reading the books of my youth. Does this mean I am old? No. Probably it is my actual age that means I am old. Anyway, on to an iconic text of my pimply youth: NORTH AND SOUTH by Elizabeth Gaskell.

As you can perhaps guess by its title, this is a novel of the Industrial Revolution. But, as so often with female authors of this period, it's wrapped up in a love story. The main character, Margaret, is a young woman living with her parents in the charming countryside in the SOUTH. She helps the elderly, darns clothes, is surprised by an offer of marriage, etc. Then her clergyman father loses his faith, and feels he can no longer preach. Hello modernity! The family are forced to scrape about for a new income, and her father is offered a tutoring position in a large city in the NORTH. It's called Milton but I think we all know its Manchester. And so begins Margaret's education in industrialisation. She is horrified by the filth and the noise, but slowly she comes to understand the life, and to value it. It's an interesting transition, but it's hard to get past how Gaskell really goes to town with the workforce. Here's a worker, whose son his going hungry while he is on strike: " Our lil' Jack, who wakened me each morn wi' putting his sweet little lips to my great rough fou' face, a-seeking a soft place to kiss - an he lies clemmin'". It's not nice to laugh at starving children, but what can you do?

Margaret also meets a dark and louring young man, a captain of industry, and it's very obvious where this is going. It's not obvious to Margaret though, who is once again surprised with an offer of marriage. I mean: it's one thing to be demure, it's another to be a dumbass. Anyway, he is rejected and becomes even more dark and louring, while breaking the strike and leaving the children to clem a bit more. Eventually after much tortured distance, they finally get together.


He clasped her close. But they both kept silence. At length, she murmured in a broken voice:"Oh, Mr Thornton. I am not good enough!"
"Not good enough! Don't mock my own deep feeling of unworthiness."

Honestly. I don't know who has been re-writing this novel in the twenty years since I last read it. I don't remember it being like this at all.
- March 23, 2014 1 comment: Links to this post 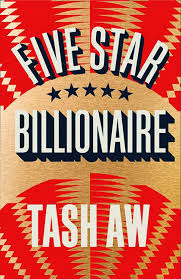 This book tells the story of some Malaysians trying to make it in China. The stories are largely separate, with only occasional overlaps, apparently a most fashionable form at the moment.

What can I tell you? I kind of hated it. The characters are very varied - a migrant factory worker, a successful business woman, a pop star - but they are also all very similar. They all want money, or, perhaps to put it more fairly, they all want the symbols of money. They all find solace in the internet. They all think Shanghai is big. I can't tell you too much about it as I've already forgotten most of it.

FIVE STAR BILLIONAIRE has received some good reviews, so perhaps I am being uncharitable. I guess it was sort of interesting to learn about contemporary China, but if that's what China is like - dull and money grubbing - I'm not sure I'm very interested.