ANNA OF THE FIVE TOWNS by Arnold Bennett 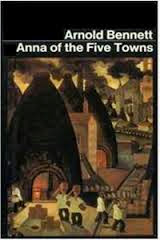 Certain novels remain in circulation only because their authors are famous for other, much better books. Such is ANNA OF THE FIVE TOWNS.

The story revolves around Anna Tellwright, a young woman whose father is a controlling miser. She is courted by the local heart throb, Henry Mynors, and agrees to marry him. She is however actually in love with a certain Willy Price, but is such a giant wimp that she never articulates that fact to herself, and so ends up marrying Mynors. Willie meanwhile is disgraced when his father's financial dealings are revealed, and so the village buys him a ticket to Australia. In despair, he throws himself into a well, and In a bizarre anti-climax, no one finds out about his suicide but assume he is Australia, that country being apparently the same as being dead.

However, there is a visit to a pottery factory, which is interesting. How do you like this, regarding the female potters: "An infinitesimal proportion of them, from among the branch known as ground-layers, die of lead-poisoning, a fact which adds pathos to their frivolous charm." Not exactly Marx and Engels, is it.

THE REMAINS OF THE DAY by Kazuo Ishiguro 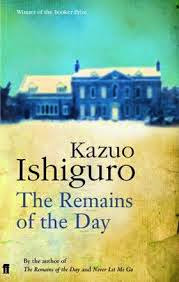 Now here is a book that I thought would break an immutable rule, and be that book that is worse than the movie.

That was my impression for about the first 90%. But then Ishiguro comes for you with a knife, and you realise the whole thing is perfectly constructed, absolutely killer, and has got not much to do with the film at all. Based on the movie, I thought it was going to be a romance; but it's not. It's about the absence of romance; about missed chances and love not lost but never found. It reminds me of THE AGE OF INNOCENCE, a novel I blubbed through while listening on audio book as I drove across rural South Africa. But that's another story.

REMAINS OF THE DAY occurs over the course of a few days' motoring holiday taken by a butler in the 1950s. During the course of the trip he reflects on his life, and tells the story of his many years of service at one of England's 'great homes.' Much of the story involves his former employer, Lord Darlington, who tried to make peace with the Germans before the war, and came to be seen by many as a Nazi sympathiser. Almost at the periphery of the story is the housekeeper, a Miss Kenton, who he spends much time with - in a professional capacity, as he continually reminds us - and who eventually leaves the house to get married. He goes to visit her on this motoring trip, having not seen her in twenty years, and realises at last what he missed out on.

He sits on a pier, at the end, talking to a stranger as the street lights come on The butler begins to talk about Lord Darlington: "He wasn't a bad man at all. And at least he had the privilege of being able to say at the end of his life that he made his own mistakes. His lordship was a courageous man. He chose a certain path in life, it proved to be a misguided one, but there, he chose it, he can say that at least. As for myself, I cannot even claim that. You see, I trusted. . . I trusted I was doing something worth while. I can't even say I made my own mistakes." The stranger tells him he shouldn't look back, and get depressed, and that the evening is the best part of the day, and should be enjoyed, especially as an older man, who has not much time left. Left alone, the butler thinks to himself:

Perhaps, then, there is something to his advice that I should cease looking back so much, that I should adopt a more positive outlook and try to make the best of what remains of my day. After all, what can we ever gain in forever looking back and blaming ourselves if our lives have not turned out quite as we might have wished? The hard reality is, surely, that for the likes of you and me, there is little choice other than to leave our fate, ultimately, in the hands of those great gentlemen at the hub of this world who employ our services. What is the point in worrying oneself too much about what one could or could not have done to control the course one's life took? Surely it is enough that the likes of you and me at least try to make a small contribution count for something true and worthy. And if some of us are prepared to sacrifice much in life in order to pursue such aspirations, surely that is in itself, whatever the outcome, cause for pride and contentment.

THE GOLDFINCH by Donna Tartt 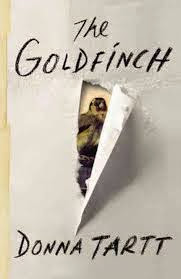 This is 800 pages of pleasure. It is an entirely unpretentious, and I can't believe it won the Pulitzer.

The book tells the story of a young boy who is in the Met in New York with his mother when it is bombed. She dies, he lives. As he leaves the museum, he takes a picture with him - the Goldfinch of the title - and this picture becomes increasingly important to him as his life unravels. The novel follows him onwards to his twenties, and is at every point engaging, interesting, and believable. The characters are so well drawn I sort of feel like I must have met them. There is a bit of a false note at the end, when the author tries to explicitly draw together the various themes: we give our own lives meaning/beauty is a mystery/ etc; but overall a most beautifully written novel.

Strangely, though, I find I have virtually nothing else to say about it. It was fantastic for plot and character, but I don't think I thought anything new as a result of it. However I won't complain: a very happy week's reading. Thank you Ms Tartt.

THE OUTCAST by Sadie Jones 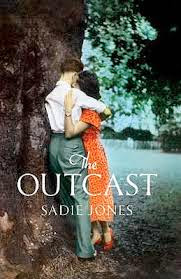 I see I made no notes or marks in this novel. Usually if I enjoy a book it has quite a few of these, little bit and pieces I find interesting or worth thinking about, and some of which make it into my blog. So this sort of implies that there was nothing much worth thinking about in this novel. Which is pretty much true. But let's not be a hater! It was still an engaging, plot driven novel, that got me through a rather painful four hour layover in Cairo.

THE OUTCAST tells the story of a little boy whose mother drowns one day when they are swimming together. It is the 1930s, so everyone is stiff upper lip about it to the point of child abuse, and the little boy grows up isolated and sad. There is a neighbour girl who is very smart, ostracized by her family and in love with the boy. The boy is however in love with her older sister. Never mind, you get where this is going: love conquers all, etc.

On a side note, on the plane from Cairo to Istanbul I was overwhelmed by nausea, and while retching into the sick bag, the man sitting next to me taps me on the shoulder, and says: Maybe is flu? You have snot in nose. I looked at him incredulously, dripping in cold sweat, and he says: What? Is only suggestion.
Then I went back to THE OUTCAST.

THE SEA, THE SEA by Iris Murdoch 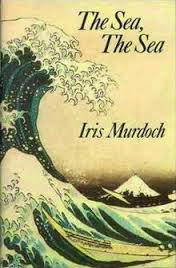 This is a book I very much admired, though I did not always enjoy it.

It’s a truly odd little novel, about an old theatre director who has decided to retire to the seaside. Sounds innocuous enough, but it slowly turns into a bizarre meditation on the creation of self, on selfishness, on obsession, and finally - weirdly - on religion.

The book is something of a diary, and the old man appears rather mean and egotistical at first. Then however he runs into the woman who jilted him when he was a teenager, who apparently retains for him some kind of idea of perfect happiness, and he pursues her to the point of stalking, and then beyond, to the point of kidnap. It’s strange and abusive, but it’s also about what it means to truly believe.

So it’s interesting philosophically; but I enjoyed it more I think for the accuracy of its observation, and the beauty of its style, than its actual content. This is Murdoch’s seventeenth book, and it shows. This lady knows what she’s doing. Take this, about a friend of the old man, who pretends to be very loud and brash:

. . . is one of those people who have a strong concept of the life they want to lead and the role they want to play and lead it and play it at the expense of everyone, especially their nearest and dearest. And the odd thing is that such people can in a sense be wrong, can as it were miscast themselves, and yet battle on successfully to the end . .

I can immediately think of several people in this category, probably including myself. The book is also interesting on the nature of the theatre, that being the old man’s profession. Here’s a pretty accurate summary:

The theatre is a place of obsession. It is not a soft dreamland. Unemployment, poverty, disappointment, racking indecision (take this now and miss that later) grind reality into one’s face; and, as in family life, one soon learns the narrow limitations of the human soul.

“As in family life” – hilarious. And here’s an interesting perspective on men in groups:


I confess I went to Peregrine not only for a drinking bout and chat with an old friend, but for male company, sheer complicit male company: the complicity of males which is like, indeed is, a kind of complicity in crime, in chauvinism, in getting away with thing, in just gluttonously enjoying the present even if hell is all around

And lastly, here’s a charming description of a happy person:


Gilbert exuded the secret satisfaction of one who has come unscathed through a fascinating adventure which he looks forward to gossiping about in another context.

Suddenly in retrospect I think I may have kind of loved this book after all.