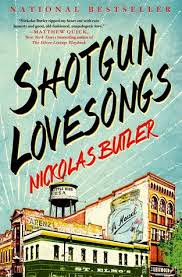 All success is mystery, but that of SHOTGUN LOVE STORIES is an especially mysterious mystery. It is a story about four male friends who grew up in the same small Wisconsin town, and have remained close into adulthood. It is apparently something of a best seller. Clearly I am missing something because I have already pretty much forgotten what it was about. Basically, blah blah awkward teens, blah blah, marriage, blah blah, one of us is an alcoholic, blah blah, redemption

LIFE AFTER LIFE by Kate Atkinson 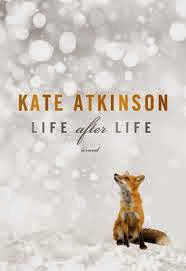 This is a really strange concept for a book. It tells the story of a woman named Ursula, born in 1910, but it tells it multiple times, with multiple different outcomes, dependent on tiny choices that Ursula makes in her daily life. So for example, in one version she dies in childhood, sucked under by a wave after having gone out too far into the sea; in another, she goes by the back stairs, instead of the front, and is raped, sending her life into a downward spiral; in another, she meets a man and marries him, and in another, she never meets him, and marries someone else. In one life, she chooses one degree, and in another, a different one, and her life spools out completely differently in either choice.

This is an anxious book, if one thinks about it too deeply, because its topic is really all the paths not chosen; and that is always a source of worry and distress – I believe for everyone. It’s very well written though, and really masterful at keeping you interested as you go back and forth on the same ground in different configuration perhaps twenty times. Also, it includes this horrifying and yet informative description of how to prepare calf’s tongue:
“Mrs Glover meanwhile was more than fully occupied with pressing a calf’s tongue, removing the gristle and bone and rolling it up before squeezing it into the tongue press . . .”I am not sure I have ever eaten tongue, and after that sentence I don’t think I ever will. That’s one path I’m very happy not to take.