THE GRASS IS SINGING by Doris Lessing 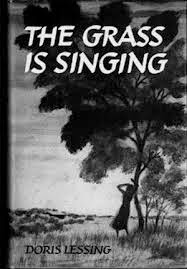 THE GRASS IS SINGING is Doris Lessing's first novel, and in it she comes out swinging. The book opens with a snippet about the murder of a white woman by her 'houseboy,' and Lessing's first line is: "People all over the country must have glanced at the paragraph with its sensational heading and felt a little spurt of anger mingled with what was almost satisfaction, as if some belief had been confirmed, as if something had happened which could only have been expected. When natives steal, murder or rape, that is the feeling white people have."

Ouch. Thanks Doris. I guess if Zimbabwe is only to have one Nobel laureate in literature, I am glad it is her. It is a fiery book and I admire her courage in having written it in the Rhodesia in the 40s. It has the distinct smell of burning bridges to it, having been written just before she left the country forever. She was not yet 30, self-educated, and had just walked out on a marriage and two children.

The story focuses on one Mary Turner, who marries because she feels she must, and leaves her happy life in Salisbury for a remote farm. Her husband is rather a failure as a farmer, and she becomes increasingly eccentric/insane over time. She becomes a little obsessed with her domestic worker,and when she dismisses him at last he returns to kill her. If this seems like an odd summary, this is because this is an odd book. It's stressful to read, pulsing with complicated feelings about race and about the land.

Like most people from small and poor countries, I have little experience of fiction about my home, so I found it very interesting in that way. For example, there's something about the solidarity of the small community that's still there:

"It's not customary in this country, is it?" he asked slowly, out of the depths of his bewilderment. And he saw, as he spoke, that the phrase 'this country' which is like a call to solidarity for most white people, meant nothing to her.

A powerful and unusual book. It made me glad Independence came when it did, so I could grow up in Zimbabwe, not Rhodesia.