AS I LAY DYING by William Faulkner 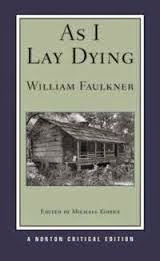 It's a strange oversight that I've never read this classic of twentieth century American fiction. Having read it, I now wish it was an oversight that had continued. It tells the story of the doomed attempt of one family to bury their dead mother in her family's homeland. This sample tells you everything you need to know:

In a strange room you must empty yourself for sleep. And before you are emptied for sleep, what are you. And when youar eemptied for sleep, you are not. And when are filled with sleep, you never were. I don't know what I am. I don't know if I am or not. Jewel knows he is, because he does not know that he does not know whether he is or not. He cannot empty himself for sleep because he is not what he is and what he is not.

Doesn't it just make you want to tear Faulkner limb from limb and drink his blood? Likewise the literary establishment? Or how's this, on a young girl:

Squatting, Dewey Dell's wet dress shapes for the dead eyes of the three blind men those mammalian ludicrosities which are the horizons and the valleys of the earth.

The other thing I particularly hated was the fact that everyone and everything in this story was miserable and/or mean. When people write comedy, in which no one is miserable or mean, we all know that this is fantasy; for some reason, in the opposite case, it's often considered gritty realism. I totally disagree. I am quite sure that there are funny bits in everything, even a hotel room suicide, and any novel that doesn't acknowledge that fact is poorer for it.
- November 30, 2014 No comments: Links to this post

A DEATH IN THE FAMILY by Karl Ove Knausgaard 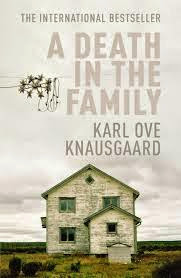 Regular readers of this blog will know how I love MY STRUGGLE, a 6 volume, 4000 page account of the life of one ordinary Norwegian man.

A DEATH IN THE FAMILY is Book 1 of the series. I had been avoiding it now for about a year, reading Books 2 and 3 first, because I thought that its central plot, of the death of Karl Ove's father, might be a little too close to home for me. You can certainly tell its the beginning, because it kicks off in fine Karl Ove form, with that typical opening for any autobiography: a reflection on death

"For the heart, life is simple: it beats for as long as it can. Then it stops. Sooner or later, one day, this pounding action will cease of its own accord, and the blood will begin to run towards the body's lowest point, where it will collect in a small pool, visible from the outside as a dark, soft patch on ever whiter skin, as the temperature sinks, the limbs stiffen and the intestines drain."

Oh Karl Ove! You're such a kidder. Then he goes on to the storage of dead bodies:

"A town that does not keep its dead out of sight, that leaves people where they died, on highways and byways, in parks and car parks, is not a town but a hell. The fact that this hell reflects our life experience in a more realistic and essentially truer way is of no consequence. We know this is how it is, but we do not want to face it. Hence the collective act of repression symbolised by the concealment of our dead. . . .no, the way we remove bodies has never been a subject of debate, it has always been just something we have done, out of a necessity for which no one can state a reason but everyone feels: if your father dies on the lawn one windswept Sunday in autumn, you carry him indoors if you can, but if you can't you at least cover him with a blanket.

In this novel, Karl Ove's father, a reclusive alcoholic has just died, and himself and his brother Yngve must go to clean up the filthy home he was living in with his senile and also alcoholic mother - Karl Ove's grandmother. We hear all the mundane details: going to the grocery store to buy bleach, stopping for cigarette breaks, etc; but also a horrifyingly honest assessment of Karl Ove's family relationships:

When we were growing up, I chatted all the time with Yngve and we never had any secrets, but at some juncture, perhaps as early as when I was a gymnas, this changed: from then on I was immensely conscious of who he was and who I was when we were talking, all spontaneity vanished, every statement I made was either planned in advance or analysed retrospectively, mostly both, apart from when I was drinking, then I regained the old freedom. With the exception of Tonje and my mother, that was how I behaved with everyone: I couldn't sit and chat to people any more, my awareness of the situation was too actute, and that put me outside it. Whether it was the same for Yngve I didn't know, but I didn't think so, it didn't seem so when I saw him with others. Whether he knew that was how I felt, I don't know, but something told me he did. Often it felt to me as I were false, or deceitful, since I never played with an open deck, I was always calculating and evaluating. This didn't bother me any more, it had become my life, but right now, at the outset of a long car journey, now that dad was dead and so on, I experienced a yearning to escape from myself or at least the part that guarded me so assiduously.

This impresses me as a really good account of how some people I know manage their lives; but it also amazes me, when I think that Karl Ove's brother is very much alive and well and reading Karl Ove's books. Can you imagine writing and publishing this sort of thing about your most intimate relationships? Karl Ove always makes me feel better about everything. It's so very rare to hear anything even close to the truth about how people really are, inside. One's more likely to get this kind of honesty in literature, than in life, but in either case its a special thing, and immensely comforting; it makes you feel less alone in this world. He's even honest about luggage:

Even though the case was heavy I carried it by the handle as I walked into the departure hall. I detested the tiny wheels, first of all because they were feminine, thus not worthy of a man, a man should carry, not roll, secondly because they suggested easy options, short cuts, savings, rationality, when I despised and opposed wherever I could, even where it was of the most trivial significance.

And about his childhood relationship to plumbing:

He also knew I was frightened of the sound the pipes made when you turned on the hot water, a shrill screech that quickly changed to knocking, impossible for me to cope with, I had to take to my heels, so we had a deal whereby he wouldn't pull the plug after washing in the morning but leave the water in the sink for me. Accordingly, every morning for perhaps six months I washed my face and hands in Yngve's dirty water.

All six books have already been out in Norwegian for some time, but the last three are yet to be released in English. HURRY UP TRANSLATOR!!! It's never a good sign when I look back at a book in order to blog it and see I have not highlighted any passages as being of special interest. Indeed, I did not find this book to be of any special interest.

It's a novelisation of Ernest Hemingway's four marriages. His first is to a nice young woman he meets in Chicago; the second to a much wealthier woman who can fund his career; the third to a hotshot journalist, who proves too successful for his taste; and the fourth to an unfortunate lady who gets the booby prize: a fat, alcoholic old man whose writing days are behind him.

Sounds like a good basis for a book, right? And yet somehow it was dull and I've already forgotten that I read it.
- November 23, 2014 No comments: Links to this post

HER PRIVATES WE by Frederick Manning

This is a novel of the First World War written by a veteran of it. I hate to say it, as it seems disrespectful, but it is deeply dull. I guess it shows that simply having lived through something does not give you the ability to explain it.

HER PRIVATES WE tells the story of a man named Bourne who is in the front lines. Because this is a British novel, the main narrative tension (other than that of being randomly killed) is around . . . wait for it . . . class. Apparently he is of a slightly higher class than the other privates, and thus should be in a higher military rank. I think you must have to be British to find this compelling.

The book is also extraordinarily dated. Here's a sample:

"In the shuddering revulsion from death one turns instinctively to love as an act which seems to affirm the completeness of being. In the trenches, the sense of this privation vanished; but it pressed on men whenever they moved back again to the borders of civilised life, which is after all only the organisation of man's appetites, for food or for women, the two fundamental necessities of nature"

Ladies, that's giving it to us more frankly than we usually hear it.

The book ends abruptly, mid-narrative arc, with Bourne's death. It is quite random, with no literary foreshadowing, no build-up, no resolution and no meaning, and he is quickly forgotten by his lower class colleagues. In some ways this was the most interesting part of the book, where the author abandoned the conventions of literature for a taste of real life / real death.
- November 22, 2014 No comments: Links to this post