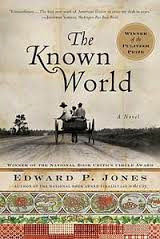 . This is a fantastic novel. I have no idea how I could possibly have never heard of it before. It's so wonderful I gobbled the whole thing down in about two days, unforgivably even reading it when I was supposed to be looking at cheetahs.

THE KNOWN WORLD tells the story of a slave owner in the late 1850s. The oddity of this story is that he is black. His parents were slaves who managed to buy their freedom, and their son - now free to do whatever he pleases - chooses to own slaves himself. His parents are horrified, and when they visit him refuse to sleep in the 'big house' with him, but instead sleep in the slave quarters. The book is interesting then as an unusual take on what we think we understand about slavery; but what makes it really compelling is the really incredible vividness of the world created. There are - I would estimate - at least fifty to seventy unique characters in this book, each expertly written enough that you feel that you are getting an overview of an entire community. Characters appear and die in a paragraph. "My daddy made it for me," a slave child, Tessie, responds to a question about her doll. In the next sentence she is dying. "She would repeat those words just before she died, a little less than 90 years later."

To say therefore that the novel is 'about a slave owner' is over-simplifying - it's about an entire world. And it's gorgeously written. Here's a man giving another man some sweets for his children:

He went into the jail and returned with a small burlap sack no bigger than a puppy's head. "Some sweets for them chaps, Barnum. Some horehound. A little peppermint for the chaps"

Puppy's head? Horrifying metaphor. I love it. Or here's man planning the gravestone for his cousin, who he just murdered to acquire some gold coins:

"All the gold would mean that he could buy a giant tombstone for John's grave, one as large as the man himself had been. He envisioned a tombstone so big that wild and insane men would come down from their lairs in the Virginia mountains and worship at the tombstone, thinking it stood over the grave of someone who had been a god."

Apparently Edward P Jones thought about the novel for some ten years before he wrote it, and then put the whole thing on paper in just twelve weeks after getting made redundant from his job at a tax journal. This amazes me. It's only January, but I think we can be sure this book will make it onto my "Best of 2015" come December. Unfortunately it's his only novel, so now I am back to reading works by lesser mortals. 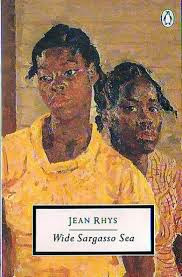 I wanted to like this book. I’ve been meaning to read it for years, as it is quite famous as a commentary on Jane Eyre (my A-level set book, and thus probably unhealthily formative). It tells the story of Rochester’s ‘mad wife,’ Bertha Mason, before she comes to England. It therefore is obviously a feminist and post-colonial critique of the novel. It is also unfortunately a bit dull and tortured. Or it is so for my tastes anyway. From the moment Rochester meets her in the West Indies its clear all is going to go horribly wrong, and the deepening sense of doom makes the two hundred pages seem very long.

I felt bad not to enjoy it, because poor Jean Rhys, like another author I just finished reading, Barbara Pym, had a long period in her life when he books where out of fashioned and neglected, and she was in her 70s before she finally hit really huge success with WIDE SARGASSO SEA. The book won a major literary award, about which her only comment was “It has come too late.” Heartbreaking. Makes me wish I liked the novel.

As a side point, it’s interesting to note that it was another author in this blog, Diana Athill, who took the risk of publishing the book.

KITTY AND THE PRINCE by Ben Shephard 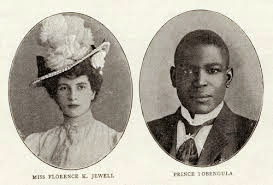 This is the story of one of Lobengula’s sons, who ended up married to a white woman and working in factory in Manchester. It’s an interesting story. In the 1890s, an impresario hired Prince Lobengula to be in a show he was taking to London called Savage South Africa, which included live presentation of major events from the Anglo Boer war (including trains and real horses) and a deeply problematic presentation of the South Africans themselves ‘exhibited’ in their kraal.

The show was hugely successful and a young woman named Kitty fell in love with the young Lobengula. They were married in the face of much opposition, and much wonder that she could love a dusky savage, etc. Check out his picture above, and you certainly won't wonder. This man is gorgeous. Run through in your mind the other Victorian men you know - all beards and glaring - and you will not be surprised: Shaw, Dickens, Darwin . . . especially Darwin. Horrifying evidence below. 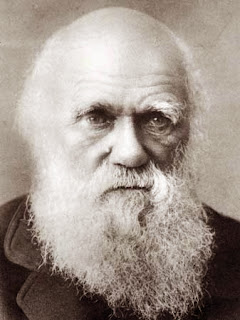 On a side point, one interesting fact I learned was that the Mormons are an important resource for historical investigation. Apparently they aim to convert as many people as possible to Mormonism, including the dead. Thus they need to know the names of the dead:

It is estimated that the Mormon Archives contain the particulars of about a sixth of the people who have had names of their own since human first developed language a hundred thousand years ago – some ten billion people, nearly all born after 1500. . . . .Their enormous database of births, baptisms and deaths is now stored on microfilm under Granite Mountain, near Salt Lake City, Utah, in a vault which can withstand the Flood predicted for the Last Days, to say nothing of thermonuclear war

The marriage ended somewhat messily, with odd accusations of finger biting, but it's certainly an interesting episode in early international travel by Africans.

This is an odd sort of memoir. It's not so much a memoir of Garrison Keillor, in particular, as it is of the world he grew up in. It's a story of a small Minnesotan town, called Lake Wobegon. I'm always amazed by memoir. How do people seem to remember so much of their childhoods? When I look back, it's a blur of nuns and jacarandas and cousins. I suspect it's all rather fuzzy really for most people, and that memoir should in fact be filed under fiction. I read recently that the age at which children can form memories is exactly the same age at which they understand the concept of story. This I think is revealing, raising the question if after all memories are much more than fiction.

LAKE WOBEGON is in any case a charming and touching piece of fiction, capturing very well the provincial Midwest, where people are astoundingly parochial, and astonishingly kind. Keillor runs a popular radio show, which is very funny, and this book is comic too. Here's one quick sample - men on a duck hunt:

Of these grizzled old comrades in their big jackets and brown ponchos, gray-haired veterans of so many hunts, good pals and true, the finest men by God that you could ever hope to meet - who knows which ones will never see another October? They all are well into heart-attack country now, where life's road gets steep and a man is easily winded. Women go on and on but men drop like flies around this age.

I like this, about women going on and on. Perhaps it's some kind of late payment for having to have legs, have babies, etc.

The annual round up of what I read is always fun. This is partly because I enjoy remembering the books, but also because the books remind me of the year. Each title carries some flavour of where it was read. I've forgotten the plot of FIVE STAR BILLIONAIRE, but it certainly still carries the chlorine tang of a Kenyan hotel pool; while KEEPERS OF THE HOUSE still holds for me an overgrown backyard in rural France.

Highlights were GILEAD by Marilynne Robinson, a truly astonishing, almost oppressively wonderful book; A MAN IN LOVE by Karl Ove Knausgaard, which began my love affair with his massive autobiographical project; and MOTHER'S MILK, by Edward St Aubyn, a book that made me look forward to my own midlife crisis. Let's draw a discreet veil over the low lights, but it certainly included the deeply unfunny LITTLE FAILURE by Gary Shtenygart; the dull FIVE STAR BILLIONAIRE by Tash Aw, and the mysterious-to-me masterpiece AS I LAY DYING by William Faulkner.

I've been tracking how many books I read by women since I read that studies show that both men and women are more likely to buy books from authors with male sounding names. Depressing. Once again I have not done very well in this area, only managing about a third female writers - not great, when I see that most of the year was contemporary fiction. Aluta continua, I suppose.

AN AWFULLY BIG ADVENTURE by Beryl Bainbridge
CHESS by Stefan Zweig
THE SON by Phillip Meyer
THE AFRICA HOUSE by Christina Lamb
ALL THAT IS by James Salter
NORTH AND SOUTH by Elizabeth Gaskell
FIVE STAR BILLIONAIRE by Tash Aw
LITTLE FAILURE by Gary Shtenygart
A FINE BALANCE by Rohinton Mistry
A MAN IN LOVE by Karl Ove Knausgaard
ANNA OF THE FIVE TOWNS by Arnold Bennett
THE REMAINS OF THE DAY by Kazuo Ishiguro
THE GOLDFINCH by Donna Tartt
THE OUTCAST by Sadie Jones
THE SEA, THE SEA by Iris Murdoch
SHOTGUN LOVE SONGS by Nickolas Butler
LIFE AFTER LIFE by Kate Atkinson
KEEPERS OF THE HOUSE by Shirely Ann Grau
HARD TIMES by Charles Dickens
LEAN IN by Sheryl Sandberg
BOYHOOD ISLAND by Karl Ove Knausgaard
THE ORPHAN MASTER'S SON by Adam Johnson
THE SHOCK OF THE FALL BY Nathan Filer
GILEAD by Marilynne Robinson
THE END OF THE AFFAIR by Graham Greene
THE HISTORY OF MARY PRINCE: A WEST INDIAN SLAVE by Mary Prince
THE LIVES OF OTHERS by Neel Mukherjee
SOME HOPE by Edward St Aubyn
BAD NEWS by Edward St Aubyn
HOUSEKEEPING by Marilynne Robinson
THE THIRTY NINE STEPS by John Buchan
NEVER MIND by Edward St Aubyn
THE BELL by Iris Murdoch
MOTHER'S MILK by Edward St Aubyn
MRS CRADDOCK by W. Somerset Maugham
THE SPORTSWRITER by Richard Ford
THE GRASS IS SINGING by Doris Lessing
AS I LAY DYING by William Faulkner
A DEATH IN THE FAMILY by Karl Ove Knausgaard
MRS HEMINGWAY by Naomi Wood
HER PRIVATES WE by Frederick Manning
THE BLUE FLOWER by Penelope Fitzgerald
THE BOOK OF STRANGE NEW THINGS by Michel Faber
EUPHORIA by Lily King
SMALL WORLD by David Lodge
CHANGING PLACES by David Lodge
JANE AND PRUDENCE by Barbara Pym
THE ROTTERS' CLUB by Jonathan Coe
THE HOUSE OF SLEEP by Jonathan Coe
TEN YEARS OF THE CAINE PRIZE FOR AFRICAN WRITING
EXCELLENT WOMEN by Barbara Pym
HERZOG by Saul Bellow
CONFESSIONS OF AN ENGLISH OPIUM EATER by Thomas De Quincey
PASSING by Nella Larsen
TRAVELS IN WEST AFRICA by Mary Kingsley