DIARY OF A PROVINCIAL LADY (and its sequels) by E.M. Delafield 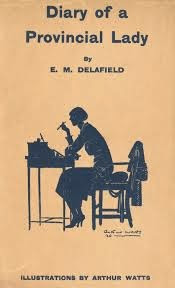 At first, the world is very sweet and innocent. A huge topic is what the vicar's wife wants for the Women's Institute. It's still startlingly modern though:

Lady B asks me at tea how the children are, and adds, to the table at large, that I am "A Perfect Mother." Am naturally avoided, conversationally, after this, by everybody at the tea table.

This disposes once and for all of fallacy that days seem long when spent in complete idleness. They seem, on the contrary, very much longer when filled with ceaseless activities

Later as we enter the war, it becomes inevitably darker. What's sad is as the second world war begins, she talks a lot about what the 'last war' was like, reminding one that a large number of people were so unlucky as to live through both wars (the author was born in 1890). It's also interesting to see modernity on its way. At first, she spends a lot of time complaining about her cook; but later she complains about never having been taught to cook (as if it's some miraculous ability that only a few people possess).

(As a side point: I wonder who is the first female comic novelist? I can't think of anyone earlier than this - so perhaps this book as well as being entertaining is also a historic document.)

DANCING IN THE DARK by Karl Ove Knausgaard 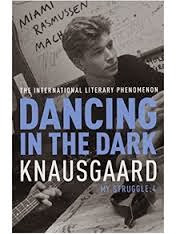 This is volume 4 of Karl Ove's 6 volume auto-biography, and I feel like I've been waiting forever for it to come out. What is his translator taking so long about? This one is about his year as a trainee teacher in the far north of Norway. Well, that's what it's about in terms of plot. In reality, it's about how incredibly badly he wants to have sex. He is 19, which apparently by Norwegian standard is incredibly late to still be a virgin. In typical Karl Ove TMI fashion, which I love, he tells us that he has wet dreams three times a week. Can this be normal? I would like to ask my male friends but it seems a bridge too far. Here he is:

I would have given absolutely anything to sleep with a girl. Any girl actually. Whether it happened with someone I loved, like Hanne, or with a prostitute, made no difference, if it happened as part of a satanic initiation ceremony with goat's blood and hoods I would have said, yes, I'm up for that. But it wasn't something you were given, it was something you took. Exactly how, I didn't know, and then it became a vicious circle, for not knowing made me unsure of myself, and if there was one thing that disqualified you, one thing they didn't want, it was a lack of self-assurance. That much I had understood. You had to be confident, determined, convincing. But how to get to that position? How in God's name could you do that? How did you go from standing in front of a girl in full daylight, with all her clothes on, to sleeping with her in the darkness a few hours later?"

Later, he begins to get pretty close, managing to get quite a few girls' clothes off while disturbingly drunk. But then he has a major problem with premature ejaculation. This, he hypothesizes, is because he never masturbates. TMI! TMI! TMI! And yet this is why I love these books; I was about to write 'love Karl Ove', because they really seem one and the same. It's so rare that someone you know, either in life or in literature, really tells you what it was like for them. I'm not sure people are really keeping it secret. I more think it's very hard to know what it has all been like. A single day, maybe yesterday, we can do: but to convey your whole life, as Karl Ove's attempting: it's amazing.
- April 24, 2015 No comments: Links to this post

THE MOVIEGOER by Walker Percy 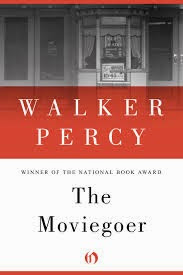 This is kind of like a French existentialist novel except set in the 1950s in America.

Here's the gleeful narrator: "It is a pleasure to carry out the duties of a citizen and to receive in return a receipt or a neat styrene card with one' sname on it certifying, so to speak, one's right to exist. What satisfaction I take in appearing the first day to get my auto tag and brake sticker! I subscribe to Consumer Reports and as a consequence I own a first class television set, an all but silent air conditioner and a very long lasting deodorant. My armpits never stink."

However he finds that despite his odourless armpits he is for some reason still unhappy. Even going on holiday with his friends is hollow: "The times we did have fun, like sitting around a fire or having a time with some girls, I had the feeling they were saying to me: 'Hows about this Binx? This is really it, isn't it, boy?', that they were were practically looking up from their girls to say this. For some reason I sank into a deep melancholy."

The novel makes the point that life is meaningless and happiness largely a personal decision. It appears to have been written when this was still an unusual point of view. It's strange to think that this, so innovative at the time, is now pretty much most people's default.
'

A HIGH WIND IN JAMAICA by Richard Hughes 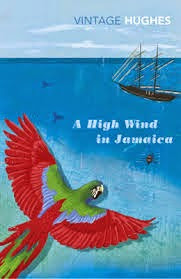 Well this is a totally wild story. Written in 1929, it is like no other novels of that period. And possibly like no novels of any period.

It tells the story of five children who grow up in Jamaica, and is told almost entirely from their perspective. It is therefore weird and unreasonable, and gets even more so when they are sent home to England in a boat, because the boat is taken by pirates, and they are accidentally abducted. The pirates treat them reasonably well, and the trip becomes a sort of strange holiday. One of the kids falls out of a window, and dies, and is never referred to by any of the children again. Another child begins to treat old bits of ship’s tackle as her babies. The oldest girl, almost thirteen, meets the fate common to oldest girls in bad situations. Meanwhile, the book is very merry. It’s like LORD OF THE FLIES, but told cheerfully.

Here’s a little sample of the surreal feel of the book. It’s the very beginning, and I include it in part because it captures something of the social impact of the end of slavery in the West Indies, a subject I never really thought about before, but which also came up in WIDE SARGASSO SEA a little while ago:

One of the fruits of Emancipation in the West Indian islands is the number of the ruins, either attached to the houses that remain or within a stone’s throw of them: ruined slaves’ quarters, ruined sugar grinding houses, ruined boiling houses; often ruined mansions that were too expensive to maintain. Eathquarke, fire, rain, and the deadlier vegetation, did their work quickly.
One scene is very clearly in my mind, in Jamaica. There was a vast stone built house called Derby Hill (where the Parkers lived). It had been the centres of a very prosperous plantation. With Emancipation, like many others, that went bung. The sugar buildings fell down. Bush smothered the can and the guinea-grass. . . . The three remaining faithful servants occupied the mansion. The two heiresses of all this, the Miss Parkers, grew old; and were by education incapable. And the scene is this: coming to Derby Hill on some business or other, and wading waist-deep in bushes up to the front door, now lashed permanently open by a rank plant. . . The two old Miss Parkers lived in bed, for the negroes had taken away all their clothes: they were nearly starved. Drinking water was brought, in two cracked Worcester cups and three coconut shells on a sliver salver. Presently one of the heiresses persuaded her tyrants to lend her an old print dress, and came and pottered about in the mess half-heartedly: tried to wipe the old blood and feathers of slaughtered chickens from a gilt and marble table: tried to talk sensibly: tried to wind the ormolu clock: and then gave it up and mooned away back to bed. Not long after this, I believe they were both starved altogether to death. Or, if that were hardly possible in so prolific a country, perhaps given ground glass – rumour varied. At any rate, they died.

“deadlier vegetation”!
“by education incapable” !
“At any rate, they died”!
I can’t imagine why this weird book isn’t more famous 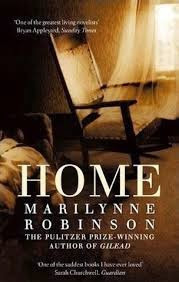 Another book about an alcoholic. I decided to try in anyway, because I so admired Robinson’s other two books – her first novel, HOUSEKEEPING, and then her second, twenty years later, GILEAD. These are both wonderful novels, in particular GILEAD, so I was very excited to read HOME as it involves some of the same characters and is in some sort a continuation of that book.

It tells the story of an alcoholic named Jack, who has been away from home for twenty years, and now returns exhausted to his father, a pastor, and his sister who has likewise returned home a mess.

The father and sthe ister do a lot of agonizing. One of the more annoying aspects of this book is that they don’t just go ahead and call Jack was he is, an alcoholic; they act like there is some sort of dark and secret reason for his behavior, some implicit sin, some mystery; and much of the book is spent trying to ferret this mystery out. Guess what, he has a drinking problem. It’s not very mysterious.

The other books were much interested in religion, and I found this actually kind of interesting, and fundamentally positive. It’s unusual in a modern book For example, in GILEAD, the elderly man talks about the joy he had as a child baptizing kittens, and the sense it gave him of the sacred nature of all life. In HOME Christianity seemed to be mostly about condemnation, and a childish view of how ‘bad’ someone could be. I found it silly.

UNDER THE VOLCANO by Malcolm Lowry 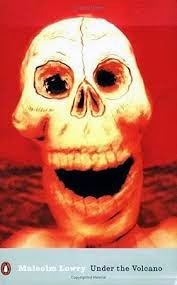 God what is it with me and books about alcoholics? Every book I pick up at the moment seems to be about sad men with drinking problems.

And the problem with a drinking problem is that it is fairly dull. You get drunk. You promise yourself you won’t drink again. You do. Etc. I appreciate it must be terrible to live through, but after the first three or four books it is pretty terrible to read through too.


But he could feel now, too, trying the prelude, the prepatory nostalgic phrases on his wife’s senses, the image of his possession, like that jeweled gate the desperate neophyte, Yesod-bound, projects for the thousandth time on the heavens to permit passage of his astral body, fading, and slowly, inexorably, that of a cantina, when in dead silence and peace it first opens in the morning, taking its place.