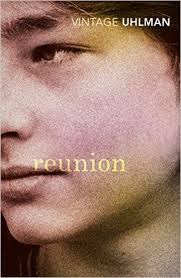 REUNION tells the story of a two boys in high school who become friends. It’s Germany in the 1930s, and one of the boys is Jewish, so we’re clear from the beginning that it’s not going to end well. This is a near perfect little novella, that had me blubbing at the dinner table at the end of its 90 pages.
The Jewish boy had never thought of his ethnicity as being any more important than his hair colour, and had rarely faced any issues with racism. The story shows how over the course of two years this changes, till he is being beaten up by his classmates, lectured in history class about ‘dark forces’ set on destroying Germany, and most painfully of all, abandoned by his friend.
His parents have been in Germany for many generations, and cannot quite believe which way things are going, particularly as his father is a veteran of WWI, a war in which 12,000 Jews died for Germany. The parents refuse to leave the country, but send their son to America. After he leaves, a Nazi comes to stand in front of the parents’ house, holding a sign that says: "Germans beware. Avoid all Jews. Whoever has anything to do with a Jew is defiled." Then:

My father put on his officer’s uniform together with his decorations, including the Iron Cross, First Class and took up his stand beside the Nazi. The Nazi got more and more embarrassed, and gradually quite a crowd collected. At first they stood in silence, but as their numbers increased there were mutterings which finally broke into aggressive jeers. But it was at the Nazi that their hostility was aimed and it was the Nazi who, before long, packed up and made off. He didn’t come back nor was he replaced. A few days later, when my mother was asleep, my father turned on the gas; and so they died. Since their death I have, as far as possible, avoided meeting Germans and haven’t opened a single German book, not even Holderlin. I have tried to forget.

Leaving aside the fact that wives should probably be consulted before murder-suicides, this is a truly terrible and wonderful story. It’s written with total simplicity, the simplicity of really great art, that looks so easy but is in fact so difficult. I highly recommend it.

THE ROYAL WE by Jessica Morgan and Heather Cocks 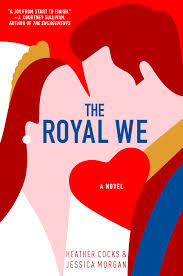 I do not usually read summer pulp, but never let it be said that I am a literary snob: observe me reading summer pulp. I even read this on the beach, the correct place to read a book that proudly/shamefully advertises itself as a beach read. I chose this book because I have been reading Jessica and Heather’s blog gofugyourself.com for a long time, and because it was 99p on Amazon.
Gofugyourself.com is fantastic blog, allegedly about fashion but mostly about wasting time, with a huge readership. Heather and Jessica began it as a joke in the early days of blogs and it is now their full fledged career, and I became a reader somewhere towards the beginning. It never ceases to amaze me how similar the two womens’ voices are, so you can never pick apart who has written what, and I was curious to see how this would work in a book.
THE ROYAL WE is an imagining of the Prince William and Kate Middleton story, somewhat fictionalised, with a young American inserted in the Kate Middleton role. It’s a fairly fun read, with a good attempt at a believable array of characters, and a central protagonist you care about. We run into trouble when they try and write about feelings, e.g.,: “(he). . . traced my jaw, the line of my neck, my arm, the whole time looking at me with a blazing, intimate intensity” but other than that I enjoyed it. I was sorry when it was finished to close my sandy Kindle, and what more really can you ask than that?

THE DAYS OF ABANDONMENT by Elena Ferrante 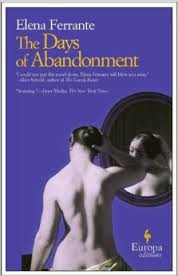 This is a book about the dangers of putting all your eggs in one basket, especially if that basket is your husband’s. The main character here, Olga, has been married fifteen years and has two small children. One day after lunch her husband tells her suddenly that he is leaving her. Thus begins a massive and not very proudly feminist meltdown.

The husband doesn’t come back for thirty four days, and Olga starts to come apart. She has moved many times for her husband’s job, so has few friends nearby, and gave up employment at his request. She’s therefore left with not too much to fall back on, and she falls hard. She does some ordinary post break-up things (e.g., propositioning the neighbour for anal sex), and then moves on to the less ordinary. On one terrible day she seems to be losing her sanity, almost drowning her little girl while trying to wash her and unable to focus long enough to phone a doctor even though the little boy appears dangerously ill. It’s all told from her perspective, as she tries to hold on to her mind, and it’s very frightening. We’re definitely on the edge of Medea territory:

The children hadn’t eaten anything. I myself still had to have breakfast, wash. The hours were passing. I had to separate the dark clothes from the white. I had no more clean underwear. The vomit-stained sheets. Run the vaccuum. Housecleaning.

Pretty often I hate this kind of thing – insanity being as difficult to write about as dreams are – but the extraordinary Ferrante of MY BRILLIANT FRIEND manages it.

Olga comes through it in the end, more or less unscarred, particularly after she finds out that her husband has left her for a twenty year old he used to coach when she was a teenager. This is hardly the calibre of man for whom its worth losing a mind.

The only false note, for me, was the resolution, where Olga ends up with the neighbour she previously propositioned. I’m not sure a new man is a good cure for having been too hung up on the old one – but there it is. At least she’s not trying to drown the children any more.

THE DISCOMFORT ZONE by Jonathan Franzen I’ve been thinking about Franzen of late because his new novel PURITY has just been released. I don’t think I’ll be reading it till I’ve seen a few reviews, as it is the dreaded book-after-the-successful-book, and I suspect a wobble. You’d have to be a titan to not overthink and overwrite after the massive hit that was FREEDOM. So I ended up reading this instead, largely because it was only 99p.
It’s a memoir of Franzen’s early life, and is often very amusing. Here he is on his efforts to sell his mother’s house after her death:

I felt some additional pressure to help my brother Tom, the executor of the estate, to finish his work quickly. I felt a different kind of pressure from my other brother, Bob, who had urged me to remember that we were talking about real money. (“People knock $782,000 down to $770,000 when they’re negotiating, they think it’s basically the same number,” he told me. “Well, no, in fact it’s twelve thousand dollars less. I don’t know about you, but I can think of a lot of things I’d rather do with twelve thousand dollars than give it to the stranger who's buying my house.”) But the really serious pressure came from my mother, who, before she died, had made it clear that there was no better way to honor her memory and validate the last decades of her life than to sell the house for a shocking amount of money.

Or here he is on his adolescence: “I spent morbid, delicious amount of time by myself, driven by the sort of hormonal instinct that I imagine leads cats to eat grass.”
Hilarious. And yet I can’t say that overall I admired it. There’s some truly leaden writing, including a long section on Charles Schultz, for no real reason, and some truly horrifying dull discussions of what he thought about German literature during his undergraduate degree. Sample “ . . as Goethe put it, in his gendered language . . “
I do wonder a bit if I’m ruined for this kind of memoir by Karl Ove Knausgaard, whose MY STRUGGLE has comprehensively closed off the area of late twentieth century male memoir, making everyone else who attempts it seem a rather sad shadow of that wonderful project.
- September 10, 2015 No comments: Links to this post

THE FISHERMEN by Chigozi Obioma 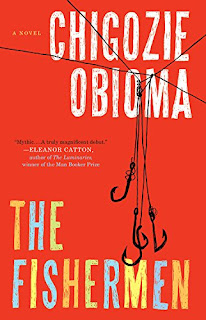 Watch out literature! The Africans are coming. Chigozi Obioma’s THE FISHERMEN is nominated for the Booker, and is a fine and frightening novel about the power of suggestion.

It tells the story of four brothers living in a high density area of a small town in Nigeria. Though it is expressly forbidden by their parents, they take to go fishing in the local river, and on one of their trips there the local madman tells the oldest son that he will be killed by one of his brothers. The idea slowly grows in his mind, and he begins to be angry with his brothers for their future treachery. Eventually a fight goes too far, and SPOILER ALERT the two youngest brothers find him dead in the kitchen apparently killed by the next oldest brother. This brother cannot be found for days, though eventually the taste of the well water reveals where he has ended his own life.

The two youngest brothers then hatch a plan to kill the madman they view as the source of all their troubles, and the novel proceeds down an ever darker pathway.

It’s a compelling read, with the horrible sense of doom of a Greek tragedy wrapped up in a very believable version of a corner of contemporary Nigeria. The writing itself is also unique, sounding as if it might be written by someone who does not have English as quite his first language, and all the more interesting for that. I’ll leave you with his description of the madman, who is the beginning and end of all their troubles:

I observed that he carried on his body a variety of odours, the most noticeable of which was a faecal smell that wafted at me like a drone of flies when I drew closer to him. This smell, I thought, might have been a result of his going for so long without cleaning his anus after excretion. He reeks of sweat accumulated inside the dense growth of hair around his pubic regions and armpits. He smelt of rotten food, and unhealed wounds and pus, and of bodily fluids and waste. He was redolent of rusting metals, putrefying matter, old clothes, distched underwear he sometimes worse. He smelt, too, of leaves, creepers, decaying mangoes by the Omi-Ala, the sane of the riverbank, and even of the water itself. . . But these were not all; he smelt of immaterial things. He smelt of the broken lives of others, and of the stillness in their souls. He smelt of unknown things, of strange elements, and of fearsome and forgotten things.