THE LONEY by Andrew Michael Hurley 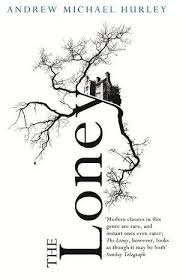 This is a book with a great set-up, but poor pay-off. Much like the average person's life, I guess.

It tells the story of a family's annual religious pilgrimage to the English coast, to a place called the Loney.

It was our week of penitence and prayer in which we would make our confessions, visit St Anne's shrine, and look for God in the emerging springtime, that, when it came, was hardly a spring at all; nothing so vibrant and effusive. It was more the soggy afterbirth of winter. Dull and featureless it may have looked, but the Loney was a dangerous place. A wild and useless length of English coastline. A dead mouth of a bay that filled and emptied and made Coldbarrow . . . into an island. The tides could come in quicker than a horse could run and every year a few people drowned. . . Opportunist cocklepickers, ignorant of what they were dealing with, drove their trucks onto the sands at low tide and washed up weeks later with green faces and skin like lint

It's all so very promising! The protagonist's brother has some kind of developmental disorder, so he cannot speak, and their mother is convinced that they can pray him well. In the best tradition of this kind of novel they run into local rural people who are obviously involved in creepy rural stuff: sheep's hearts turn up in cow's skulls, pregnant teenage girls disappear, community theatre is obviously a satanic ritual, and etc. Why are rural people always doing this kind of thing? Probably they are bored because internet speeds are too slow for youtube.

Anyway, eventually the brother is healed after the locals do something not too fantastic with a baby. Somehow this manages to be anti-climactic.

THE MARTIAN by Andy Weir 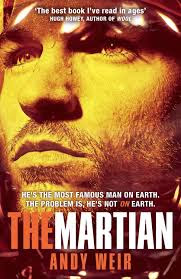 This book which is now a bestseller and – apogee of literary achievement – a movie, began life as a self-published pdf. I read a very charming interview with its author who explained that he had an irrational fear that the whole thing was set up, some kind of big joke, because the path from pdf to blockbuster seemed so unlikely.

The book tells the story of an astronaut who is left behind on Mars and has to survive for almost a year on his own. The interest of the story is not at all psychological – the astronaut remains implausibly chipper throughout – but more in the way he – as he puts it – ‘sciences the shit’ out of his situation. He comes up with all kinds of inventive solutions to apparently impossible problems – growing food, getting water, etc – which are very interesting to read about. It made me wish I’d studied science in school, and I hope it does that too for the kids still in school who see the movie. Somewhat unintentionally, I‘ve also seen the movie, and it’s better than the book – shorter, more psychologically believable, with added bonus of Matt Damon being mostly bare chested.

A SUNDAY AT THE POOL IN KIGALI BY Gil Courtemanche 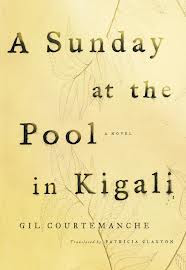 This is certainly the most highly sexed account of the Rwandan genocide I've ever read. It tells the story of an older Canadian journalist who is in Rwanda over the period of the genocide, living in the famous 'Hotel Rwanda'. He begins a relationship with a much younger waitress, and we learn almost as much about the curve of her butt and the perkiness of her breasts as we do about the genocidal violence. It's mid-life crisis meets mass murder. In a deeply unlikely plot twist, he marries her. In a more likely plot twist, despite her being Tutsi, he refuses to leave the country with her because 'he likes Rwanda.' He likes it less later on when the poor woman is abducted and gang raped.

The book is excellent as an account of the real feel of this period, as the author was there for much of the time. It reminded me once again how horrifyingly well planned the genocide was, and how many countries and international bodies were fully aware of what was going to happen. I do think though that it's a little odd, how much energy is given to condemning the UN in Rwanda. Surely, condemnation should be primarily for those who committed the crime. This is clearly how it operates with the Nazis and the Holocaust; so I'm not clear why it doesn't work that way in Rwanda. I'm going to go ahead and say it's kind of racist, as if the press feels that Rwandas are in some mysterious way not capable of planning and executing their own genocide, just as well as the Germans.

The journalist thinks the waitress is dead after the gang rape, but then later finds out she is alive. Apparently this was not uncommon in the genocide, as while men were dispatched quickly, women were often raped and tortured and left to die slowly (e.g., as in her case, having yours breasts hacked off). He finds the waitress in a market, but she says he should leave her as she is 'no longer a woman'. He does so immediately. Apparently we are supposed to think this is romantic? I just find it fairly believable. Always nice to have that Canadian passport when the breasts are no longer perky, or indeed existent. 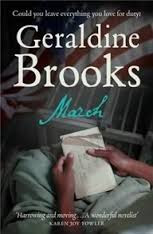 In my endless quest for something to read I have taken to studying past winners of literary prizes. I thought of the Pulitzer recently and was disappointed to learn that I have in fact already read virtually all the winners of the last two decades. MARCH was the exception.

Those familiar with LM Alcott’s LITTLE WOMEN will recall the book tells the story of a mother and her four daughters over the course of a year while the father is away, serving the Union in the Civil War. This is the story of the father’s year. It’s a fiction based on the real experiences of LM Alcott’s own father.
Alcott in real life was an impressively free thinker. Born to barely literate farmers, he entirely self-created a very unusual vision for his life: His radicalism took many forms.

“Vegetarian from childhood, he founded a commune, Fruitlands, so extreme in its Utopianism that members neither wore wool nor used aminal manures, as both were considered property of the beasts from which they came. One reason the venture failed in its first winter was that when canker worms got into the apple crop, the nonviolent Fruitlanders refused to take measures to kill them.”

He was not willing to fight in the war, though many pacifists put aside their ideals in order to join what they saw as a fight against slavery. He therefore became a non-denominational chaplain, before such a concept existed, much to the confusion of the men he sought to help. Cue horrifying if familiar scenes of civil war butchery. Later, he got involved in an aspect of the war I’d never heard about – that is, trying to rescue that year’s cotton crop. As the Union troops advanced, more and more cotton fields came behind their lines. The owners had obviously fled, leaving behind the now freed slaves. Now the Union had a problem – how to produce cotton, which they needed, and how to introduce previously enslaved people into the formal economy. They ended up finding Northern men with capital, but without farming experience, to take over leases on the farms and try to get the crops out. It was as you can imagine a difficult project. In March’s case, it was made worse by the fact that some former slaves had chosen to join the confederates, and they burned down the cotton crop, and re-captured the slaves, right before the harvest.

I can’t say I cared very much about the characters in this novel, or about the plot, but the setting was extremely interesting. I was particularly fascinated by the attempt to move slaves into employees, and by how very fragile that distinction can be.

ALL MY PUNY SORROWS by Miriam Toews 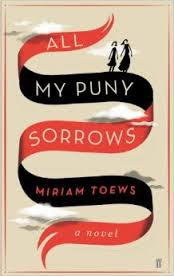 This novel tells the story of a woman whose father and then sister commit suicide. It is apparently somewhat autobiographical, as the same thing happened to the author. It is a quite horrifying read, sort of car crash literature, a horrible way to see from a distance what it looks like when the worst happens.
The father kills himself quite quickly and unexpectedly, while the sister makes many attempts and is frequently stopped. She ends up in hospital, begging her family to let her die. They refuse. She eventually seems well enough to be allowed home, where she immediately succeeds in killing herself at last. I have heard that one of the commonest responses to suicide is anger, and I can absolutely see why that would be so. I felt really furious with the sister by the end of the book. Quite how you could force your family through that kind of grief, I can’t understand. But then I suppose I’ve also never considered suicide, so no doubt there are whole swathes of human experience outside my knowledge. Thank goodness.