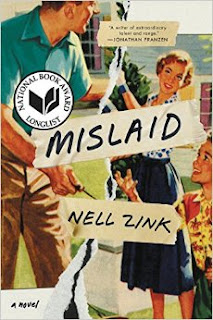 This is a book with a lot of opinions, and I really enjoyed it. Here's one, on some girlie magazines the main character finds at a dump: "The cover price was high, suggesting a wealthy man, but pornography is a classic payday splurge of the shiftless." MISLAID is full of declarations of this kind, suggesting someone who has a lot to say, and, thankfully, the desire to say it in an entertaining way.

I understand Zink only published her first novel at fifty, and this is her second, and you certainly get the impression of someone who is writing what they damn well please. Having said that, I'm always doubtful of these outsiders, novelists who appear fully formed from the forehead of Zeus. They always have a drawer full of novels they've been working on for years and a great friendship with whoever literary superstar they met at AA. I won't even google Nell Zink, but I guarantee it's true. There's virtually no actual outsiders in the fine arts; you have to go to professions with money for that, such as banking.

The novel is about a woman who leaves her husband and son behind and flees with her daughter to live in poverty. Sounds grim, but it's really very entertaining. Here's the mother, Meg, with the small daughter, Karen: "Meg’s first paycheck materialized as she drove to the grocery store early one morning. She saw a cardboard box on the shoulder. She stopped, because a box like that nearly always contains kittens. Not worth money, but tell that to Karen. Karen worshipped kittens as gods."

We have a couple of issues with plot resolution at the end, it's all a bit pat - "The good ended happily, the bad unhappily. That is what fiction means" as Wilde has it - but endings are always hard. Great book overall.
- March 28, 2016 No comments: Links to this post

WHAT I LOVED by Siri Hustvedt 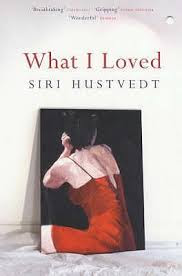 This is an unusual book in being a sort of boring thriller. The first half is the description of the life of an art critic and his wife who develop a friendship with the artist and his wife who live upstairs from them in New York. There is a lot - and I mean pages - of description of art works. I can't tell you too much about that, as I skipped it, this kind of stuff being almost as boring as descriptions of dreams.

The couples have sons of about the same age, so they boys become friends. Then the art critic's son dies in a boating accident, and there is a lot of grieving. I was sort of starting to wonder where the book was going - and then it went somewhere: the other child, it slowly emerges, is a sociopath. He appears to have feelings, but in reality he has none, and his whole life is a series of strange lies and diversions to get whatever he impulsively happens to want. He gets involved with a young artist who turns out to be a murderer, he becomes a drug addict, he starts threatening his parents - it's all getting most interesting - and then, wait for it . . . . the parents decide to cut him off as he is not safe to be around. So they do that successfully and everything is fine. I mean ????? That's it? This is not the exciting conclusion centuries of development of the novel form had led me to expect.

I know the novel was not trying to be what I wanted it to be. I'm pretty sure that the exciting conclusion was supposed to be a bit more around theme than plot - I won't go into it for you, but basically the art critic goes blind (snore) - but I just refuse to engage with all that. For me, there was a really great thriller in here, but somehow it got buried in someone's MFA writing group.
- March 28, 2016 No comments: Links to this post

BOOKS I HAVE ABANDONED 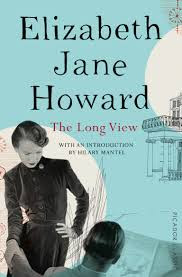 I don't know if I'm getting less disciplined in my old age, less interested in the wider world, or if everything's just getting more crap. I've been abandoning books left and right. Here's an overview:

PORTRAIT OF A LADY by Henry James: This should be the sort of book I like. I love a fat old novel. I've tried it before, one singular Christmas in Tallahassee when I was nineteen, and abandoned it then, but I thought I should try again, because the credentials are so good. But God, it was hard going. No using one word when ten would do, no need for a plot if you can put in a description. So I gave up.

TOM JONES by Henry Feilding: In a depressing turn on events, someone seeing the title asked me if it was a biography of the singer. I felt very literary, and yet I just couldn't make it all the way through. It was fun, but all very dawn of the novel, lots of disconnected episodes and a strong supposition that we don't need any background on the political machinations of Bonnie Prince Charlie.

THE LONG VIEW by Elizabeth Jane Howard: I love the 'Staff Picks'at London's bookstore Foyle's (independent: I'm in hourly expectation of its closing), so when the cashier was moist eyed with enthusiasm when I bought this novel I was ready to be excited. The beginning was great: "This, then, was the situation. Eight people were to dine that evening in the house at Campden Hill Square. Mrs Fleming had arranged the party (it was the kind of unoriginal thought expected of her, and she sank obediently to the occasion) to celebrate her son's engagement to June Stoker." Unfortunately while well written, I found it hard to get engaged. It's about an unhappy marriage in the 30s, and I can only think that this was all perceived as more tragic back then. I spent most of the book thinking JUST GET A DIVORCE THEN JESUS. So I had to give up

THE LEOPARD by Guiseppe de Lampedusa: I actually read this in college, after a professor specifically recommended it to me, and thought I'd re-try it now. It's a story of a decadent old nobleman at the time of Italian unification, and while interesting in many ways there was way too much pontificating about how 'Sicily is weighed down by history' and 'Sicilians are an exhausted people,' and so on. Once has to listen to a lot of addled political talk from people who don't know what they're on about in daily life; it's not what I need from literature