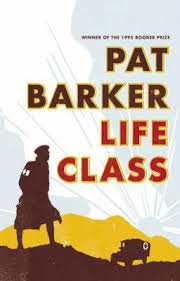 I'm not saying you can't write novels of the First World War, but I kind of also am saying that.

Barker makes a strong effort here - it's all there, the field hospital, the eyeballs swinging out of sockets, the deserter for execution, etc etc: but it's hard going when you're competing with ALL QUIET ON THE WESTERN FRONT, with ANTHEM FOR DOOMED YOUTH, with someone who was actually there. LIFE CLASS has rather the air of cups of tea in Notting Hill, and of strenuous and detailed imaginings.

The book is stronger the further away it is from the Front. It begins with young men and women at London's Slade art school, all agog with social change and the difficulties of working in charcoal. There's sexual tension galore that comes to abrupt halt with conscription. The main male character, Paul, works at a field hospital, where he slowly becomes friends with a sweet-hearted young recruit. I am sure you will not be aghast to learn what happens to the young recruit: what always happens to young recruits in WWI novels, and indeed what happened pretty often in WWI itself, i.e., death.

It was a pretty good book, so I don't know what I didn't enjoy more. Maybe it's just that the same story has been done so much better elsewhere: it couldn't help but suffer by comparison. The same book, but about soemthing else - say - Bonnie Prince Charlie, or the Lord's Resistance Army, or Brexit - might have been better.