THE CHRYSALIDS by John Wyndham 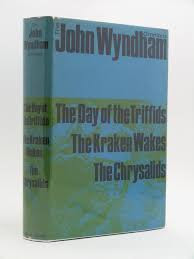 John Wyndham is famous for DAY OF THE TRIFFIDS, a terrific novel that if you haven't read you ought to. It's about alien plants aiming to take over the world: you know you want to. I've been thinking about it often this spring, because frankly all this fecundity in April has its creepy side.

Anyway, THE CHRYSALIDS I read is contained in a charming old hardback called THE JOHN WYNDHAM OMNIBUS and is a charming old post-nuclear-apocalypse novel. It begins in the best tradition of such books with some children sweetly playing together only to uncover a horrible truth . . . that one of them has six toes. This is horrible because ever since 'Tribulation' humanity has been trying to claw its way back to purity and exterminate any mutant strains. Awesome. As often with such novels we have fun with the theme but it does not quite develop into a successful plot, but who cares. It did make me think that it's interesting we are today so relatively unafraid of nuclear holocaust. There's no reason to be less afraid - indeed we should be more, as nuclear power moves into non-state hands - but I guess it's hard to keep up an appropriate level of terror in the long term.

The third novel in the OMNIBUS was THE KRAKEN AWAKES, which I liked too. It reminded me of my dad, who always used to greet me with that when I woke up late on a weekend. I never knew where it came from. Dad did love a good mid twentieth century scifi, and so do I.

My inability to entertain myself is probably getting close to abnormal. I was recently in Rome and ran out of reading matter just before we were about to travel back to London. Panic! What will I do? Think my own thoughts? What a horrible prospect. So I looked through the Kindle app on my travelling companion's iPad and found a bunch of books by an author who I loved as a teenager - Terry Pratchett, which included my old favourite MORT.

MORT is the story of an awkward young man who cannot find an apprenticeship in his own village and so agrees to become an apprentice to an athropomorphic entity representing DEATH. So he learns the scythe carrying, and the hour glass wrangling, and so forth and so on . . . never mind: the fun of Terry Pratchett is not in the plot, which is always a bit half-hearted. It's not the destination, or even the journey, it's more the scenery. As for example when Mort is looking at a rock: "It had curly shells in it, relics of the early days of the world when the Creator had made creatures out of stone, no one knew why." 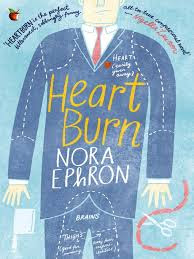 This book is a comic retelling of the end of the author's second marriage. As she says in the introduction: " . the book you're about to read . . is often referred to as a thinly disguised novel. I have no real quarrel with this description, even though I've noticed, over the years, that the words 'thinly disguised' are applied mostly to books written by women. Let's face it, Philip Roth and John Updike picked away at the carcasses of their early marriages in book after book, but to the best of my knowledge they were never hit with the thinly disguised thing." It's true, this mid-twentieth century generation of novelists seem to have been obsessed with their exes: our current easy-come-easy-go relationship to marriage doesn't seem to provide quite the same grist for the novelistic mill.

HEARTBURN is a light-hearted story, though a little gimmicky for my taste, with receipes included throughout as part of the plot. I think the actual divorce must have been awful: she had a two year old and was seven months pregnant when she found out her husband was not just having sex with someone else but actually in love with her. As she says: "I've managed to convert an event that seemed to me hideously tragic at the time to a comedy - and if that's not fiction, I don't know what is."

I also enjoyed the setting - it's New York among the monied classes in the 1970s, so everyone is eating souffle and out to out-anecdote everyone else. Overall though I found the book a little forgettable, and felt like it would be better on screen, as the best thing about it was the dialogue and the set pieces (e.g., falling into a seal pond). Then I realised Nora Ephron was in fact a screenwriter. Extra points if you know a movie she wrote. (I'll date myself with a clue: Men and women can't be friends . . .)

THE KINDNESS by Polly Samson 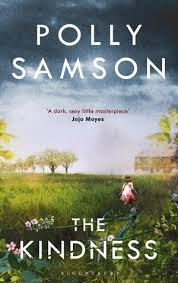 THE KINDNESS moves around a lot in time. This is not an easy thing to do, and Samson does not manage it. We see a relationship's beginning from its ending, and etc etc. Done well, this adds mystery and excitement. Done poorly, it just removes all narrative tension. So - yup. The main character, a man, is drunk and alone in his house reflecting on his failed marriage and the last days he had with his daughter who has some kind of unnamed terrible terminal illness. British authors do love a good childhood terminal illness. The book is described as a thriller, and guess what's supposed to be thrilling: apparently the child is not dead. The husband is just so upset with his wife that he decides to cut off both her and HIS OWN CHILD. Then at the end the child as a teenager comes to reconcile with the father and I guess it's supposed to be redemptive. In fact what happens is that you feel like the central character is sort of silly, and you hope this is not really the big reveal. But actually it is. 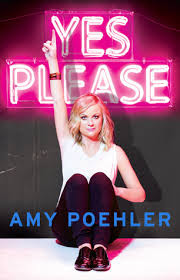 I feel bad to say it but this book made me like Amy Poehler a little less.

The early section, where she talked about her childhood (blissful) and her struggle to get into comedy (inspirational in retrospect) was interesting. But the lengthy last part, about her current famous self was sort of dull. Maybe this is because I do not really know how famous Amy Poehler is, and do not really know her famous friends. Thus anecdotes about how much she laughed backstage eating burritos with Will Arnett, whoever he is, leaves me cold.

Also deeply unfortunate is a part where she goes to Haiti. I know it's not very kind, but I include a picture she puts in her book - apparently without irony - that shows you how she thought about that experience. 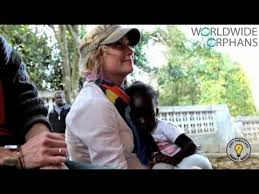 In the preface, she talks about how hard it was to write the book, and shares her struggle as to what should go in it:

"In this book there is a little bit of talk about the past. There is some light emotional sharing. I guess that is the 'memoir' part. There is also some 'advice', which varies in its levels of seriousness. Lastly, there are just essays, which are stories that usually have a beginning and an end, but nothing is guarantted."

And perhaps that's a bit the problem. I'm not sure you should write a book, if you're not quite ready to put yourself in it. Though perhaps I'm judging her against a ludicrously high bar, of Proust and Knausgaard - but then, if you set out to write a memoir, that's just who the competition is.

It's probably best if she sticks to screenplays. Because despite the book I continue to like her shows, and I love that her and Tina Fey are writing and making movies with women as central characters. And some bits of the book were to me inspirational, not least her ability to claim confidence as her right. Let's end on an inspirational note, from Poehler: "I believe great people do things before they are ready. This is America and I am allowed to have a healthy self esteem"

So perhaps she wrote the book before she was ready, but perhaps that's not such a bad thing.
- May 08, 2016 1 comment: Links to this post

SOME RAIN MUST FALL by Karl Ove Knausgaard 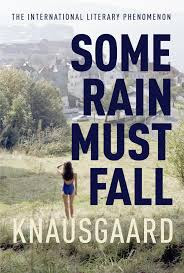 SOME RAIN MUST FALL is Book 5 of 6, and as with the others nothing happens. Yet somehow you can’t stop reading, and when it’s over you feel awfully sad and lonely.

I pity the poor blurb writer, who tries to give it a plot, telling how the main character (i.e., the author) arrives at university “full of excitement and writerly aspirations. Soon though, he is stripped of youthful illusions. His writing is revealed to be puerile . . . and his social efforts are a dismal failure. Awkward in company and hopeless with women, he drowns his shame in drink and rock music.”

This is indeed sort of true, but also not true. It’s the kind of falsity that comes from trying to summarise any real life: imagine trying to summarise your own, even over a few years. It makes me feel sweaty just to consider it, an attempt to assign so much meaning. And Karl Ove has not attempted it. He tells us as usual his day by day, with us left to construct the story around it. It makes the books both boring and wonderful, much like real life.

He rarely steps out of his day to day, but here’s one time, which captures some sense of what I think he’s going for:

Once we were seventeen, once we were thirty-five, once we were fifty-four. Did we remember that day? 9 January 1997, when we went into REMA 1000 to do our shopping and came out again with a bag in each hand and walked down to the car, put the bags on the ground and unlocked the door, placed the bags on the back seat and got in? Beneath the darkening sky, by the sea, the forest behind, black and bare?

Or here talking about something else he refers to “. . .Life as it unfolded around me, with the trivial incidents that make up all lives and can suddenly shine bright in the dusk of meaninglessness; the door goes, she comes home, bends over and takes off her shoes . . ."

The early section has much to say on his issues with masturbation (I had mercifully forgotten about this problem) and the various horribly embarrassing social situations he creates (though in this book he finally admits what I had guessed from his author photo, but would never have guessed from the way he writes about himself: he is good looking). I’m blown away once again by his picture of life in Scandinavia, which seems wildly improbable to a Zimbabwean: his life story does not involve at any point revolve around government decisions, and his choices are largely funded by the state. At one point he says Rome is the most chaotic place he’s ever been to. Can you imagine Western Europe being your bar for chaos?

This book ends where book 1 began, so I am assuming the last book, Book 6, will take us into the present day. I haven’t even begun it yet, as it’s not out in English, but I’ve already begun mourning its end.