A LITTLE LIFE by Hanya Yanagihara 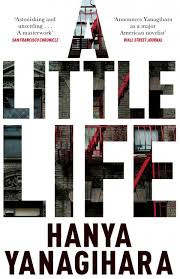 This novel drips shortlists and rave reviews from quality papers, and probably deserves them all. It starts off as a story of four friends from college all trying to make it, mostly in the arts. This was my favourite part of the novel, capturing early adulthood wonderfully well. Here's a description of a restaurant where one of them, an aspiring actor, works:

Not everyone who waited at Ortolan was an actor. Or to be more precise, not everyone at Ortolan was still an actor. . . . It was easy to tell who at Ortolan was once an actor and was now a career actor . . . Acting was like a war, and they were veterans: they didn't want to think about the war, and they certainly didn't want to talk about it with naifs who were still eagerly dashing toward the trenches, who were still excited to be in-country. . . How did you know when it was time to give up? . . . Was it when you got fat, or bald, or got bad plastic surgery that couldn't disguise the fact that you were fat and bald? When did pursuing your ambitions cross the line from brave into foolhardy? How did you know when to stop? In earlier, more rigid, less encouraging (and ultimately, more helpful) decades, things would be much clearer: you would stop when you turned forty, or when you got married, or when you had kids, or after five years, or after ten years, or fifteen. And then you would go get a real job, and acting and your dreams for a career in it would recede into the evening, a melting into history as quiet as a briquette or ice sliding into a warm bath.

But these were days of self-fulfillment, where settling for something that was not quite your first choice of a life seemed weak-willed and ignoble. Somewhere, surrendering to what seemed to be your fate had changed from being dignified to being a sign of your cowardice. There were times when the pressure to achieve happiness felt almost oppressive, as if happiness were something that everyone should and could attain, and that any sort of compromise in its pursuit was somehow your fault.

This gives a feel of the energy and fun of the novel, and will doubtless make painful reading for those who spent any part of their twenties in variously the fine arts, fashion, or media.

Slowly the book turns more to focus on one of the friends, a character called Jude. He has had a very tough childhood, and we start to veer dangerously close to misery memoir. There are pages and pages on self harm, on suicide attempts, and so forth. At some point you wonder at what point it is okay to go from being sorry to being annoyed. That said, I read all 800 some pages in two or three days, so clearly the author's doing something right. Especially appealing I think is the creation of a particular world, which I'm very familiar with - a big city kind of life, that is lived without a lot of the ordinary accoutrements of adulthood (children, mortgages, etc) - that I don't think is very represented yet, in the literature. I looked up the author (who interestingly, given that the book is almost entirely about gay men, is a woman) and I see this was in her mind as she wrote it. Here she is, on her characters:

None of them are legally married or have kids, and this book is also meant to be a homage to a different kind of adulthood, one that isn’t often celebrated in fiction, but which is adulthood nonetheless. An adulthood in which there is a primacy of friendship. It exists perhaps particularly in New York, where people have come to erase their past to a degree in a family of like-minded people. The 20th century was all about romance, but that is quite a recent idea. Friendship is perhaps a purer relationship, I think.

I've thought for a while that the lives of many people I know are based very much on friends and housemates rather than parents and children, and it's interesting how little represented this is in arts and media. Well done A LITTLE LIFE, for giving us what's presumably the first of many such stories.
- June 05, 2016 No comments: Links to this post

GO TELL IT ON THE MOUNTAIN by James Baldwin 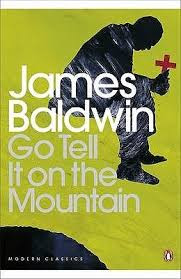 And he certainly odes deal with his father. Big time. The novel takes place during a single all-night church service during which the 14 year old John (i.e., James Baldwin) gives his heart to Jesus. The novel dips in and out of the memories of all of his family, covering everything from his grandmother, who was a freed slave, to his mother and aunt and of course, his father, who though a lay preacher is essentially the novel's monster. It's unclear if John's conversion is a submission to, or victory over, the man.

Baldwin has a dark view of family life, and every relationship is complicated and unhappy. The freed slave woman, for example, is mostly pictured as a burden her daughter can't wait to escape: it's frighteningly unsentimental.

It's also remarkably written. It's full of the Bible. Here he is on Broadway: "And certainly perdition sucked at the feet of the people who walked there: and cried in the lights, in the gigantic towers; the marks of Satan could be found in the faces of the people who waited at the doors of the movie houses; his words were printed on the great movie posters that invited people to sin. It was the roar of the damned that filled Broadway, where motor-cars and buses and the hurrying people disputed every inch with death. Broadway: the way that led to death was broad, and many could be found thereon; but narrow was the way that led to life eternal, and few there were who found it."

It's a great novel, showing what can happen at that wonderful point where poetry and self-help converge.