NOW IN NOVEMBER by Josephine Johnson

This won the Pulitzer in 1934, when the author was 24. It was her first novel. Can you imagine? I haven’t read any of her other eleven novels, but I think we can rest assured that the rest of her writing life was basically one long case of that-difficult-second-album.

The book tells the story of a family who are impoverished during the Great Depression and have to move out of the city. They end up as small scale farmers, and the novel covers a long and terrible period of drought. It is a stark reminder of how brutal agriculture is, and what a miracle food can be.

It’s an extraordinarily lyrical novel of the natural world and I veered wildly between loving and hating it. Here’s an example: “In the thought and strangeness of self we could spend hours as traveling through a labyrinth, and it was a riddle sufficient in those day to keep the mind quick and seeking, hungry and never fed; and in the mystery of the turnip, you forgot the turnip leaf”

What? Anyway, an interesting reminder of what hard work actually is, and of the value of rain. Probably useful for me to think about as I head into the London winter.

FATHERS AND SON by Ivan Turgenev 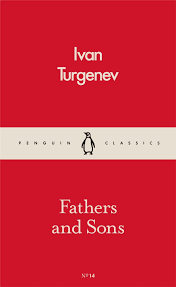 I went to an exhibit recently about 19th century Russian portraiture, and suddenly found a great gap looming in my knowledge of the western cannon. In the same breath as Tolstoy and Dostoevesky, the captions spoke of someone called Turgenev. Who is this Turgenev? I've never read any Turgenev! What am I missing?

Not a whole hell of a lot, based on FATHERS AND SONS. A young man, Akardy returns home from medical school with a friend, Bazarov, who he admires. Bazarov is a nihilist, and his disavowal of traditional Russian values is as thrilling to Arkady as it is horrifying to Arkady's parents. Bazarov meets a lovely young lady and a powerful struggle ensues between his hormones and his nihlism. Nihilism briefly triumphs, and then - just when he is beginning to regret this - he conducts an autopsy without careful enough hygiene. This is the nineteenth century, so he dies. Arkady meanwhile has been busy falling in love with the lovely young lady's sister, and due to his lower commitment to nihilism, and higher commitment to hygiene, he lives to marry her.

It actually sounds like a pretty good book in this summary, and I guess it was. It was the novel that really established the word 'nihilism,' and the character of Bazarov was hugely influential in the development of that idea. Perhaps it now seems rather tired and elderly simply because it created so very many imitators. Now, to a new reader, it seems like an imitation of something else; and that something else is itself. Now that people have truly given up on the idea of life having a meaning, Bazarov's early gestures in that direction seem a bit half-hearted. He's so full of ideas and hopes and passions that by our standards it's hardly nihilism at all. I can't decide whether or not to feel sad about this. I think perhaps I do.
- August 21, 2016 No comments: Links to this post

THE SORROWS OF YOUNG WERTHER by Goethe 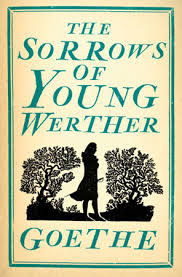 I have been avoiding this brief novel for years. I am not really sure why. It just sounds sort of stupid. Famously, the novel was a huge success in 18th century Europe, igniting a fashion for yellow waistcoats, and setting off the first recorded wave of copycat suicides in history, which led to its ban in many countries. Death is I guess the ultimate compliment you can pay a work of art but somehow I just figured the story would annoy me.

And it did annoy me. I mean, who kills themselves because the woman they love marries someone else? JUST HAVE AN AFFAIR. Or: RUN AWAY TO TAHITI. Or: JUST MEET SOMEONE ELSE. Having said that, it is a remarkable novel for the period - anything before 1750 or so can be hard-going (CLARISSA, for example. I thought this lengthy early novel would be an interesting challenge. Challenging, it is. Interesting, not so much.). Yet having said this, I recommend this book. It carries an air of extraorindarily contemporary freshness. Take this:

All learned schoolmasters and educators agree that children do not know why they want what they want, but that adults too, as well as children, stagger around on this earth,like them not knowing whence they come or whither they go, pursue true goals just as little as they, and are just as completely governed by biscuits and cakes and birch rods: nobody will believe that, and yet it seems to me palpable.
I am ready to grant - for I know what you would say to this - that the happiest are those who like children live for the day, drag their dolls around, dressing and undressing them, slink with bated breath about the drawer where Mama keeps the sweets locked up and, when they finally get hold of what they want, gobble it down by the mouthful and cry, "More!" - those are happy creatures. Happy are those too who give sumptuous titles to their shabby occupations, perhaps even to their passions, recommending them to the human race as gigantic operations contributing to man's salvatin and welfare!"

There's much of this kind. Much of the sweetness of death that is weirdly compelling, even today. I'm not sure I'm ready to kill myself, but I can see how someone might be.

MY SON, MY SON by Howard Spring 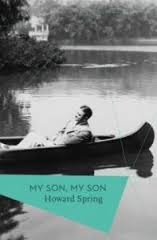 This is a novel about a man who is seriously hung up on his son. Set in the early part of the twentieth century, it's an interesting window into the pre-Wars world, and reminds me how extraordinarily lucky I am to be born now rather than then. Obviously first prize is not to be born female at all, but if you have to be, at least it should be today, when you have some hope of your dad actually caring about you.

The everyday sexism is not so surprising - that after meals the women always do the dishes while the men smoke their pipes - but I was taken aback at how frank the main character, William Essex, is about wanting a baby boy rather than a girl. Also suprising to me is his bizarre mini-romance when he is 35 with a 14 year old girl called Maeve, the daughter of his friend. Later, when Maeve is 22, he falls in lust with her friend Livia, and then is surprised when this young woman prefers his teenage son to his elderly self. The son is very upset with his father, and runs away with Livia. He later dumps her for Maeve, and Maeve becomes pregnant. In one of the WTF moments so common in books of this period, Maeve then kills herself. By this point I had begun to get the swing of the general misogyny, so I was not surprised to find that the central character regards this as quite understandable and indeed even commendable.

There is also some stuff about the Irish Revolution, which I didn't quite follow, never having really understood that conflict.

In writing this I've come to realise that apparently I didn't really like this book at all. However I did finish all 578 pages, so it can't have been that bad. Also, I only bought three books on vacation so didn't have much choice. There was some funny writing, so let's end on this little snippet from Chapter 1, back when I thought I might still like this book:

What a place it was, that dark little house that was two rooms up and two down, with just the scullery thrown in! I don't remember to this day where we all slept, though there was a funeral now and then to thin us out.