THE GO-BETWEEN BY LP HARTLEY 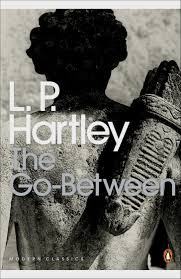 God, this novel has a great first line:

The past is a foreign country: they do things differently there

I bet when Hartley thought of that, he was like BOOM.

The book opens with a man finding a box of stuff from his school days, full of bits of old junk and a diary.

It was a roll-call in reverse; the children of the past announced their names, and I said "here". Only the diary refused to disclose its identity.

This diary opens the door to a rather painful coming of age story. A young man called Leo goes to spend the summer with his school friend Marcus. He gets involved in carrying letters between Marcus' wealthy sister, and a local farmhand. It's an interesting book, because the main action happens 'offstage.' It's this love story where the main action is happening, and we just see it through the eyes of the go-between. It all ends very badly, almost impossibly so for a contemporary reader, for whom the chasm of class is hard to understand. The book's narrator is an older man, living in the 1950s, looking back to his own boyhood at the turn of the century, and much of the appeal I think is the evocation of the mystery and melancholy of our own past; of how little our choices are in retrospect our own, but rather a product of our moment.

Also enormously successful this is evocation of schoolboy life at the turn of the last century. How is this:


But in those days schoolboys seldom called each other by their first names. These were regarded simply as a liability, though not such a heavy liability as one's middle name, which it was just foolhardy to reveal.

Schoolboys have a much clearer perception of each other's characters than grown-ups have, for their characters are not obscured by a veil of good manners: they deal in hard words, they have no long-term policy, as men have, for asserting themselves, they prefer short profits and quick returns