THE BEACH by Alex Garland 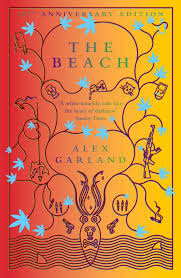 I was on a beach holiday in Thailand, so the least I could do was read THE BEACH. I read it in a single day, pretty much, from lunch table to deckchair to middle of the night by Kindle’s glow. I can’t quite decide what I think of it.

The book tells the story of a young man, Richard, who goes “travelling”.

Collecting memories, or experiences, was my primary goal when I first started travelling. I went about it in the same way as a stamp collector goes about collecting stamps . . . . Most of the list was pretty banal. I wanted to see the Taj Mahal, Borobudur, the Rice Terraces in Bagio, Angkor Wat. Less banal, or maybe more so, was that I wanted to witness extreme poverty . . . Of course witnessing property was the first to be ticked off the list. Then I had to graduate to the more obscure staff. Being in a riot was something I pursued with a truly obsessive zeal . . .

TELL ME IT’S SATIRE. Can you imagine anything more disrespectful than tourist-ing someone’s low income, or political problems? It is thus obviously delightful when Richard, in his quest for the perfect paradise with like-minded travellers finds instead a police state which ends in murder and dismemberment. This is exactly what you hope for, for him, and the others. Though I can’t shake the feeling there is something unattractively prissy and bourgeois in my enjoyment of the death of his particular dream.

Garland shows he isn’t shy by beginning the story the traditional way: with a map. Richard is given a map which allegedly shows an island paradise. Richard and two French people whose he’s met that afternoon agree to try and find this island. Eventually they do, having to get through a 2 km swim, a large-scale mauijana farm operation, and a waterfall. Once there, they are not very warmly welcomed by the 30 or so travellers already on the beach. They fear their paradise being “discovered,” as Koh Samui and so forth were before. This strikes me as a strange fear, but it’s quite central to the plot. As Sal, the leader puts it, describing their eleven years of travelling before they found the beach:

Living with death. Time limits on everything you enjoy. Sitting on a beautiful beach, waiting for a fucking time-limit to come up. Affecting the way you look at the sand and the sunsets and the way you taste the rice. Then moving on and waiting for it to happen all over again

They are eventually accepted by the group, and at first it does really seem that they have discovered Eden, but slowly it becomes clear that it’s actually Lord of the Flies, with bonus lightly armed Thai militia. Everyone is smoking an awful lot of pot, and with it is coming some serious paranoia. Sal refuses to get medical help for injured members of the group, fearing this will reveal the location of the beach. Later a couple of people turn up on the island who Richard gave the map to on impulse, and he seriously considers killing them rather than letting them find the beach. Fortunately for him, the new arrivals run into the militia, with horrifying results, taking the problem out of his hands.

So it all goes to shit, but you can see why Richard, who is English, and his French friends aren’t that bothered. Once they decide to get out:

For some reason this made me really angry. Partly I think this is because just the queuing alone for my last passport took 12 hours, but mostly because it makes so very plain the very prosaic structures of privilege underlying all this supposedly wild adventure. It’s lots of fun to take big risks and explore the untamed wilderness of Asia, when you know very well you can turn around and go back home, to the delightfully tamed wilderness of Europe, any time you please. It’s nice when poverty’s just a vacation.

I should mention also that Richard has clearly played a lot of videogames and watched a lot of war movies and an interesting strand of this book is his mental collapse, a sort of hot mess of early male adulthood and marijuana. I haven’t really covered it here, but I think that another reader might have found that the most interesting part of this novel. Someone else might have enjoyed the Robinson Crusoe aspects, which are also here in abundance. I guess having written this post, I do know what I think of this book: it’s really rather good, a thriller that keeps you up to midnight, but also a novel with lots of big interesting ideas. Just so you know that Garland was only twenty six when he wrote it. GAR!