THE WINDUP GIRL by Paolo Bacigalupi 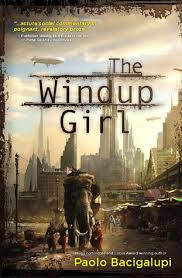 I feel like almost every scifi novel can be summarised: “Great premise, but the plot struggled”. I wonder why this is? It’s almost as if all the energy of the author goes into the monumental effort of creating a world, and none is left over for characters or plot.

The premise here is really fun. It’s Bangkok, after what is called the ‘Contraction’ a period that comes after our own, which is apparently known as the ‘Expansion.’ In this world, sea level rises have wiped out most major cities, and fossil fuels are rare and strictly forbidden. Genetic engineering is everywhere, creating ‘megadonts’ – huge elephants, who turn wheels to make factories run while there is no more electricity, but more importantly, also holding a total stranglehold on food production. The ‘Calorie men’ are all powerful, coming from companies with fantastic names such as Midwest Compact and AgriGen. People die of ‘generipped’ plagues left and right, with wonderful names such ‘cibiscosis 118. A’.

The plot is less fun, being some mish-mash of typical movie scenes, and going on for rather too long. It’s also amazingly old fashioned in regards to gender. The wind-up girl of the title is a very advanced cyborg, bred to obey. She was designed as a secretary in Japan, but has ended up abandoned by her owner in Thailand and being a prostitute. Boringly, because of her genetic programming, she orgasms no matter what, including during rape scenes. And rape scenes there are, written with poorly masked enjoyment.