THE THREE-BODY PROBLEM by Cixin Liu 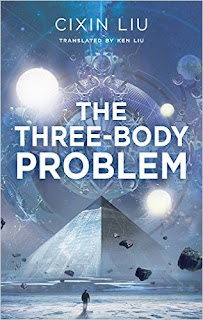 I haven't read much Chinese fiction, and certain never any Chinese science fiction. It is plenty weird. First, it is written by a former software engineer and it shows. How delightfully loopy is this:

Battles like this one raged across Beijing like a multitude of CPUs working in parallel, their combined output, the Cultural Revolution.

. Or this reflection on a woman the protagonist is in love with:

Wang subconsciously thought of her as the long-obsolete DOS operating system: a blank, black screen, a bare “C:>” prompt, a blinking cursor. Whatever you entered, it echoed back. Not one extra letter and not a single change. But now he knew that behind the “C:>” was a bottomless abyss.

The story covers the first contact of humanity with an alien civilization, who are seeking to leave their planet, Trisolaris, because it has a catastrophic climate driven by the fact that is has three suns. This is the 'three body problem' that the aliens spend many millenia trying to solve. It's a major achievement to make a math problem into an exciting element of your novel's plot, and Liu doesn't manage it. I skipped a lot of this part, not least because it was unfolded in a - wait for it, this is so dorky - video game. Important note, prospective authors: just as dreams are boring in ordinary fiction, so are video games in science fiction.

Back on our planet, a Chinese astrophysicist who has lost her family in the Cultural Revolution manages to send a message out beyond our solar system. She gets a reply, which is incredibly: "Do not answer! Do not answer! Do not answer!" It is sent by a pacifist on Trisolaris who knows that if the Trisolarins can figure out where the messages are coming from they will come to take over the Earth. In an awesome twist, the astrophysicist immediately responds. She is furious with humanity for what has happened to her family and believes that we deserve what is coming to us. Even more awesomely, the Trisolarins immediately do two things: send out a fleet to reach us, and begin to plot how to kill or confuse all our physicists. They are not afraid of our current armaments, but of what our science could do; and most particularly of what the physicists could do, as no major breakthrough happens without them. It's not often you think of physicists as our first line of defence.

Anyway, despite what has turned into a generally positive review, and the fact that this book won the Hugo I thought it was kind of boring. The characters are truly impressively thin, and the plot while fun was deeply questionable. On the other hand, it was not quite like anything else I've ever read, so I'm glad I blitzed through it.