LIFE AND FATE by Vasily Grossman 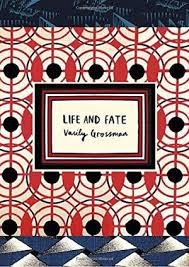 As the title suggests, LIFE AND FATE is a novel with a wide scope. It's a gigantic account of Stalinist Russia, mostly during the second World War, written by someone who was there: who survived the siege of Stalingrad; who lost his mother to the Holocaust; who took items from Hitler's desk immediately after his death; and who of course - in the best tradition of all truly important Russian novelists of the twentieth century - saw his own novel kept from publication till all relevant people, including himself, were dead.

To give you some measure of how vast it is, and how difficult it is to write any kind of pathetic little blog post on it, let me tell you the list of characters alone is eight pages long. And it's desperately needed, as you move wildly around from Stalingrad, to kolkhozes, to death camps (on both the Fascist and Soviet sides), to Moscow laboratories, to minor Ukranian towns, to the Lubyanka. This last is a major prison in Moscow, in which I spent so much time in Solzhenitsyn's THE GULAG ARCHIPELAGO that it was like meeting an old friend.

I read some years ago the autobiography of Lenin's wife (hilariously pictured below), and was struck then by what seemed an almost insane level of idealism. There was lots of sitting around in cellars with your three friends from university and talking about how you were going to bring down Tsarist Russia. Then incredibly they actually did bring down Tsarist Russia, not without some serious weeping in the streets of Zurich while singing the Internationale. 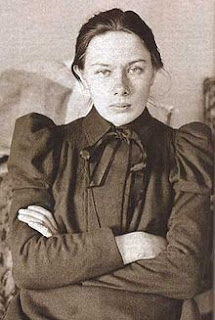 And you see in this book the end point of this kind of wild belief in a better future. There is a long dark shadow of "1937" across this book, which is a kind of code for talking about Stalin's purges. I'd heard of these before, but in this book I really learnt of their scale. Almost the entire leadership of every area was executed (or "sentenced to ten years without right of correspondence," i.e., executed). This meant huge number of highly capable people were lost, but as the system insisted on confessions, and denunciations, and 'evidence,' it also left behind an even larger number of people carrying an enormous - and in some cases - unbearable burden of guilt, for providing the requisite denunciations and evidences. And yet somehow many people still convinced themselves that the state was still fundamentally right, and revolutionary justice was outside the realms of ordinary justice. People informed on each other left and right, and felt alright about themselves while doing it. Overall, it makes some African dictatorships I know of look pretty good.

In fact, this book made my life overall look pretty great. Try this, on the siege:

The German air raids stopped at dusk. A man arriving in Stalingrad at night, deafened by the guns, might well imagine that some cruel fate had brought him there just as a major offensive was being launched. For the veterans, however, this was the time to shave, to wash clothes and write letters; for the turners, mechanics, solderers and watchmakers this was was the time to repair clocks, cigarette-lighters, cigarette-holders, and the oil-lamps made from old shellcases with strips of greatcoats as wicks.

Or this, on life in the Russian military:

All his life as a soldier he had been afraid of having to account for lost ammunition and ordnance, lost fuel, lost time; afraid o fhaving to explain why he had abandoned a summit or crossroads without permission. Not once had he known a superior officer show real anger because an operation had been wasteful in terms of human lives. He had even known officers send their men under fire simply to avoid the anger of their superiors, to be able to throw up their hands and say: 'What could I do? I lost half my men, but I was unable to reach the objective'

While dark, the world of the book is also hilarious and very weird. This is because I think it is pretty much written direct from life. Grossman himself was asked to denounce people, and did so. So he knows what he means when he speaks of guilt. Try these conversations from Stalingrad:

"He's a fine fellow. A Bolshevik. A true Stalinist. A man with experience of leadership. And stamina. I remember him from 1937. Yezhov sent him to clean up the military district. Well, I wasn't exactly running a kindergarten myself at that time, but he really did do a thorough job. He was an axe - he had whole lists of men liquidated."

Apparently that's how we speak about the security organs. And here we are on the correct Stalinist view of women:

"She's got legs like a stork, no arse worth speaking of, and great cow-like eyes. Call that a woman?"
"You just like big tits," Chentsov retorted. "That's an outmoded, pre-revolutionary point of view."

I could go on. I think I've given you a flavour of maybe ten percent.