EMPIRE OF THE SUN by JG Ballard 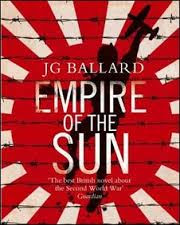 Anthony Burgess called EMPIRE OF THE SUN "an incredible literary achievement," and he's not wrong. It's a remarkable work. I am perhaps the more struck by it because I first read a much earlier and less sucessful book of Ballard's - THE DROWNED WORLD - which, though a sci-fi set in London, has many of same themes: apocalyptic collapse; loneliness; final decisions. It's fascinating to see a writer take the same set of pre-occupations and move them from middling to masterpiece.

The book is based on Ballard's own experience of spending his early adolescence in a Japanese prison camp during the second world war. The Ballard proxy, a child named Jim, lives a privileged life in Shanghai until he is about ten, when the war comes and he is interned. Let's caveat though that privileged is perhaps a relative term, as pre-war Shangai sounds fairly intense. The Chinese are taking it to the next level with frequent "public stranglings" and some delicious street snacks

He turned away, tripping over the charcoal brazier in which a pavement vendor was frying pieces of battered snake. Drops of fat splashed into the wooden bucket, where a single snake swam, thrashing itself as it leapt at the hissing oil.

Yum. After a little while interned in the camp with 3000 others, the fried snake starts to sound pretty good. The prisoners get very little to eat, and go from picking out the weevils to cherishing them for their protein. It's interesting to see particularly how pragmatically the child handles the war. The adults are bogged down in morals and sentiment, but Jim isn't burdened with any of that. Here he is thinking about a doctor he meets who has made a passing comment on dentistry:

He was suspicious of the physician, of his long legs and his English manner and his interest in teeth. Perhaps he and Basie would team up as corpse-robbers? Jim thought about the goat which Dr Ransome wanted to buy from the Japanese. Everything he had read about goats confirmed that they wree difficult and wayward creatures, and this suggested that there was something impractical about Dr Ransome. Few Europeans had gold teeth, and the only dead people the doctor was likely to see for a long time would be Europeans.

The peace proves more dangerous than the war. Once the Japanese leave them, they have no more food, and no one to protect them from the various other starving groups: the communists, the nationalists, the civilians. Then the Americans start dropping canisters of food from their planes. Jim manages to find one, which is full of Spam.

Smiling to himself, Jim thought of his mother - he could no longer remember her face but he could all too well imagine her response to the Spam.

The book is fantastically interesting historically, emotionally compelling, and very beautifully written. Much of the book is, bizarrely, given its subject matter, very lovely. Particularly, there is a focus on the beauty of aviation. Jim develops an elaborate fantasy life around the airplanes he sees in the sky, mixed up with the dark time he spends as slave labour on a kamikaze plan runway.

The whiteness of the runway excited Jim, its sun bleached surface mixed with the calcinated bones of the dead Chinese, and even perhaps with his own bones in a death that might have been.