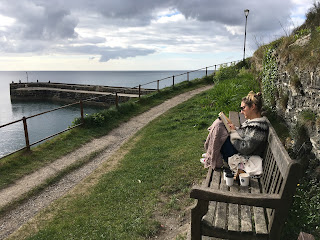 One thing that’s just fantastically fun is to have a book to read on vacation that’s written in that location. A weekend in Cornwall demands du Maurier almost as much as it does cream teas.

It’s a gothic thriller with a high cheese factor: dark moors, dark nights, dark men. But it’s still a fun and engaging read. I kept failing to look at the view because I was busy seeing where the book would go. Also, I appreciate Daphne fighting the good fight with the patriarchy: the main character is a woman – unusual for a book of the thirties – and a woman who is very much in charge of her own decisions and her own destiny. There’s a love story woven in here somewhere, in the middle of shipwrecks and albino vicars, and this – which could have been the cheesiest part of the story – is in fact the most complicated. He’s difficult, and she’s difficult too, and SPOILER while they get together at the end, it’s already a very prosaic negotiation: an unexpected burst of reality in the midst of murder and mayhem. 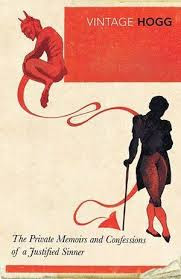 The first appeal of this book is that the author was an eighteenth century shepherd who taught himself to read. It’s not so often that the illiterate get a look in. It’s a strange story, full of unreliable narrators, including the author himself, who appears as a shepherd in the story.

It’s a thriller whose thrill is based on the Calvinist theory of predestination. Yes, you read that right. Apparently predestination was a hot topic in the eighteenth century. It’s the idea that as the saved are a chosen people, and as God has planned your life in advance, if you are one of the chosen you are always chosen, no matter what you do: you can’t sin yourself out of your pre-determined salvation, even by sinning a lot. This makes a sort of sense, if you think about it a lot, and shows the dangers of thinking a lot on anything. Logic has a lot of dead ends.

Predestination was I guess a kind of a cultural madness, and Hogg attempts to show this by taking it to its furthest extreme. A young man who believes himself saved is approached by another young man (‘Gil Martin’) and encouraged to think that it is his duty to smite the unbelievers. He’s hesitant, but is eventually convinced that even if he is in the wrong, he is saved in any case, so any error cannot keep him from heaven. He starts by smiting a local parson with whom he disagrees on some microscopic points of doctrine, and it goes downhill from there. It’s obvious to the reader from the beginning that Gil Martin is probably Satan, and over time it becomes horribly obvious to the young man also, who is driven to ever more desperate measures.

It made me think about the young men who join Daesh. It must take real courage to do what you think is right, and more courage to realise you were wrong, and an even more terrible courage to do anything about it. 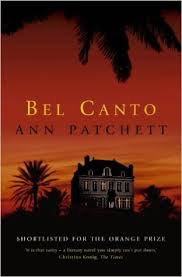 This sounded like it was going to be good: 50 wealthy people taken hostage and held by terrorists for four months in a ballroom. But I found it unfortunately rather bad: a great premise, but a lame and unlikely story.

First thing that was unlikely: there is an opera singer among the hostages, who decides she needs to practice, and so sings for two hours a day - and the people ACTUALLY LIKE IT. This strains credulity. I can’t imagine anything worse than being imprisoned and then made to listen to opera. I think this is supposed to be some kind of reflection on the universal redemptive power of great art but I guess what I learnt is that I don’t believe in that power.

Second thing unlikely: this opera singer and some man fall in love, despite not speaking the same language. I think this is supposed to be some kind of reflection on love existing on a plane beyond language. I guess I also don’t believe in that.

Third thing unlikely: one of the hostages and one of the terrorists fall in love. This, despite a truly vast gap in class and experience in violence. I guess I do believe in Stockholm Syndrome, but I don’t think that’s what Pratchett was going for.

In short, I guess this book was educational. I learnt I don’t believe either art or love conquer all. 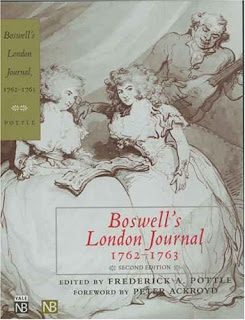 I don’t suppose many people read Boswell, and those who do probably don’t begin with his lesser works. But there you go: such are the perils and pleasures of not letting the Amazon algorithm suggest what you read, but rather the mysterious inner workings of a charity shop at Clapham Junction.

The algorithm rationally assigns you what you would probably enjoy (i.e., the big classic: Boswell’s Life of Johnson). The British Heart Foundation shop erratically suggests the reading preferences of whoever has died that week. This I really quite enjoy, as for some reason this particular charity shop has really rather highbrow donors. It’s surprising. I suspect it is because readers of similar tastes go there, and so donate there, and so go there. It’s me and a bunch of OAPs, would be my guess. So that’s the story of why I am reading a relatively obscure 18th century diary in an even more obscure 1950 edition the cover of which I struggled to find on Google images for your thumbnail enjoyment.

I love a good diary. There is something extraordinarily reassuring in seeing the day-to-day of someone else’s life, even if that someone has been dead for 200 years. Here’s a flavor, from the footnotes:

About this time he (Boswell) began also to write a series of memoranda, one octavo page every day, apparently jotted down the last thing before he went to bed or the first thing in the morning before he put on his clothes. In them he tells himself, always in the second person, what to eat, what to wear, what supplies to get in, what books to read; makes schedules for calls; gives directions for pleasures; orders himself to keep his journal posted; implores himself to try to attain to greater gravity.

It’s touching to see how other people suffer days when they are down, for no reason; that other people have to make resolutions; have to find self-control, and exercise that boring daily discipline of happiness. It’s particularly touching to read the diary of someone in their early twenties, as I don’t think that’s something often preserved (unless they are a suicide). I’m struck by how much time Boswell spends resolving on ‘manner’ – on being this or that type of person. I recall that from my twenties, and it’s interesting to see I don’t seem to do that anymore. Perhaps I am actually an adult.

There’s also a charming and sometimes horrifying flavor of 18th century London. Boswell is always to be found drinking coffee, going to the theatre, eating in chop houses, etc. Here we are with a prostitute (he’s always having sex with these poor women in the street):

In the Strand I picked up a little profligate wretch and gave her sixpence. She allowed me entrance. But the miscreant refused me performance. I was much stronger than her, and volens nolens pushed her up against the wall. She however gave a sudden spring from me; and screaming out, a parcel of more whores and soldiers came to her relief.

I have a lot of questions that I don’t really want answered about all of that. Near the end of his diary Boswell finally meets Johnson, and we see here his first notes that would become the famous Life. It’s enormously quotable, and makes me feel I need to work on polishing my conversational knife a little further:


Sir, I was once a greater arguer for the advantages of poverty, but I was at the same time very discontented. Sir, the great deal of arguing which we hear to represent poverty as no evil shows it to be evidently a great one. You never knew people laboring to convince you that you might live very happily upon a plentiful fortune.

Mr Johnson said today that a woman’s preaching was like a dog’s walking on his hinder legs. It was not done well, but you were surprised to find it done at all.

Also charming are the editor’s almost insanely detailed, and sweetly dated, footnotes, which clearly mark how much this academic loves this man. Example - Boswell is busy with another prostitute, and the editor comments: “ ‘roger’ of course has a different meaning today, in this age of radio-telephony”

I love that line of Alan Bennett’s about reading being "as if a hand has come out and taken yours” from across time. This book made me feel like that, in the best possible way. 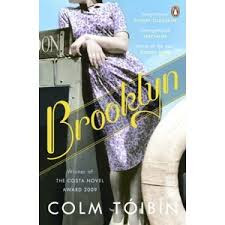 This is a wonderful novel, deeply engaging, remarkably concise; creating a world and characters you care about in a brief 250 pages. It is at the same time entirely forgettable. It's a strange mixture. I felt like I just swallowed it whole and now it's over and I have some kind of eater's remorse.

BROOKLYN tells the story of a young Irish woman who moves to America, leaving behind her widowed mother and sister, as she is unable to find work at home. She is deeply unhappy at first, but finally finds love with an Italian. It's an interesting window into a truly immigrant New York, where she has to be trained in how to eat spaghetti before she goes to meet his parents. Then SPOILER ALERT her sister dies, and her boyfriend asks that she marries him before she goes home to see her mother, as he is scared she will never return. She does so, secretly, thinking it a little silly, as she fully intends to come back. Once in Ireland, she finds out - as do many who return home - that home is strangely powerful. Almost immediately America disappears like a dream, in the scary way that not-here can do.

She meets someone new, and it turns out it was smart of her Italian to get the marriage done before she left. It comes out, the world being a small place even before the internet, and she heads back to America, wiser now, confident that home too can disappear, given time.
- April 08, 2017 No comments: Links to this post