CAUGHT IN THE REVOLUTION by Helen Rappaport 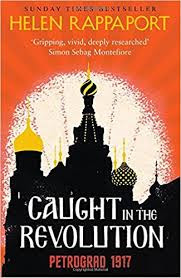 I rarely read non-fiction, but this was the 'one free' of a 'buy one get one free' deal, so here we are.

I am interested generally in revolutions, and this turned out to be an interesting book. Released to mark the centenary of the Russian Revolution, it tells the story of the year 1917 in Petrograd by means of the diaries and letters of foreign visitors, who were, as the title dramatically tells us "caught in the revolution." There's an array of types: diplomats, servants, Emily Pankhurst; hundreds of British governesses, left destitute when their wealthy employers flee, etc. Quite a fair number of visitors however were not "caught in the revolution" but in fact trying to catch it; the town was awash with foreign journalists. As one hilariously put it: "I smell trouble . . . . and thank god I am here to get the photographs of it."

Interestingly, quite a few of these journalists were women, many of whom sound quite frighteningly badass. One woman reporting was Louise Bryant, a fervent communist who began with divorce and ended with alcoholism via typhus, proving you don't need to have the vote to have a fantastic time.

I learnt from this book that the revolution had many causes, but that the most pressing one was hunger. Queues for food were days long, in temperatures well below freezing. What surprised me was what caused the hunger:

By February the daily consignment of flour to Petrograd had dropped to just twenty-one wagonloads, instead of the normal 120 needed. . . . Official mismanagement, corruption and wastage of supplies were prodigious, made worse by a crippled rail network that was unable to transport food efficiently from the provinces – where it was still plentiful – to the cities that most needed it. People were incensed to discover that, due to the hikes in the price of oats and hay, much of the black bread – the staple diet of the poor – was being fed to the capital's 80,000 horses to keep them alive: 'every horse was eating up the black bread allowance of ten men'. . . . Word spread like wildfire about food going to waste, of 'millions of pounds of cheap Siberian beef' being left to rot in railway sidings. Few of the munition-workers, whose wives or children spent more than half their time in the queue before a bread-shop, had not heard of the 'fish graveyards' of Astrakhan, where thousands of tons of the spoiled harvest of the Caspian were buried; and all classes had heard of the 'saccharine rivers' which travellers had seen flowing from leaky sugar warehouses in the great beet-growing districts of South Russia and Podolia.

I guess I know that famines have generally historically been due to lack of political will to resolve them, rather than a lack of food. Even today, globally we create more food than we need, while people starve in Yemen, but I was amazed to learn that even while the Russian government knew they teetered on the brink they couldn't get their act together to just get the railroads moving.

It is interesting to read what it was like for the Russians suddenly set free of the Tsar. So little experience did they have of freedom of expression or freedom of association that they had to borrow an English word to describe what they are were now doing: Meetinki. It is wild to imagine what it would be like to finally be free to have an opinion.

Groups of twenty or thirty would spontaneously gather, and then 'one of the company mounts a stone, or a bench, or a heap of snow and talks his head off, gesticulating wildly. The audience gazes fixedly at the orator and listens in a kind of rapt absorption. As soon as he stops another takes his place and immediately gets the same fervent silence and concentrated attention

As one American diplomat telegraphed President Wilson: "We have here an infant class in the art of being free containing one hundred and seventy million people, and they need to be supplied with kindergarten material."

Some of what went on was not very kindergarten. There was quite a lot of violence, especially against the Tsarist police, who very much sound like they deserved what was coming to them (i.e., being beaten to death). Weapons were everywhere, as one journalist noted: "Even street urchins seemed to have picked up revolvers, and were blazing away at stray pigeons." The author, Helen Rappoport, makes free use of some very questionable adjectives, calling violence 'senseless,' and damaged imperial decor 'sad' which I don't think the starving would agree it was. That said, I enjoyed it overall and am glad I took a break to read some non-fiction, not least because I shall now sound crushingly well-informed about the Russian revolution when the topic comes up. As obviously I now hope it will. Let me think of how to angle dinner party chit-chat in that direction.

POUR ME by AA Gill 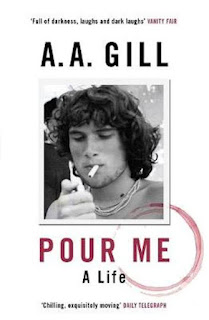 There are very few journalists who can write a good book, and AA Gill is not one of them.

It starts well, with the account of the alcoholism of his 20s. Memoirs of addiction are difficult, being all basically the same story, but he gives his an interesting spin. Here he is on his recovery through William Glasser therapy methods:

Bill Glasser . . . believed that there were five things that people needed in order to function properly, and the first and the greatest of these was love. It wasn’t an original thought. But they don’t tell us this, because frankly no one wants to be told that the answer to everything is love. No one wants the payoff of his tragedy to be the chorus of a pop song.

And there are some nice turns of phrase - here is on his father: "My dad died of Alzheimer's. I watched him retreat like Napoleon as the frozen winter of the illness buried his memories. He retreated further and further, fighting dogged but ultimately unmemorable rear-guard actions over the remembrances of his life . . . "

But once he is recovered, and himself again, I find I don't really like that self very much. For a start, he seems to be a kind of pretentious guy. Try this little piece of showing off: "Cookery books are the unconsidered diaries of family life, the everyday history of breakfast, the Veda of lunch, the Decalogue of dinner." And there's a lot of this kind of thing: " . . . the cruet set brought back from honeymoon that sat on a dresser for a lifetime, too silly to use, to fond to throw away, still with the grains of salt that had rested there, the symbol of a friendship and hospitality for a lifetime."

Worse than this, is its extraordinary insularity. There is a tiny section of North London - a hard core of few hundred people who regard themselves as a sort of intelligentsia - who, like Welsh miners, have heroically resisted globalisation, and a view of their own un-importance in the big world. Antonia Fraser's MUST YOU GO - read in the dark days before this blog was begun - is the summit of this world view, but this one is pretty bad too. There's also some extraordinarily awkward name-dropping Try this: "Snowdon: old people and fancy bantams. You could never accuse him of snobbery: he treated them both exactly the same. I'm very fond of Tony, but he could be a bugger just for the devilment of it." It's that 'Tony' that really grates. And don't even get me started on his mention of snobbery: Gill has a lot to say on this, but I think you have to have been born in England to know what he's on about - it drips with unacknowledged class anxiety, which, if you weren't brought up to it, is one part hard to understand and two parts annoying.

THE GRAND SOPHY by Georgette Heyer 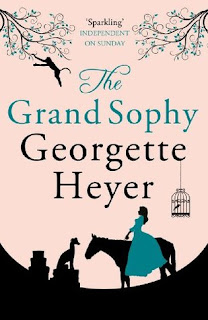 To read Georgette Heyer is to learn to appreciate Jane Austen. Some readers - usually male - argue that Austen cannot be considered a serious writer - like her heavily bearded nineteenth century peers -because she wrote what they dismissively describe as 'love stories'.

Quite what is wrong would be wrong with that, I'm not sure, as these people never object to stories on other emotions. However it's not accurate. Austen's books are not so much about romance as they are about learning to live with yourself in the world; making bad choices; and facing the consequences. Heyer's, on the other hand, while apparently similar - a love story, a Regency setting - are quite plainly and simply about nothing very much. They're sheer joyous escapism. You can read them with happy confidence that all will turn out well, for those who deserve it to. As per Oscar Wilde:

The good ended happily, and the bad unhappily. That is what fiction means.

I read a good amount of Georgette Heyer as a teenager, but haven't opened her in a couple of decades. I was driven to it recently by an urgent need for escape - for the good to end happily - and THE GRAND SOPHY provided a delightful weekend's reading. I was a little shame faced over reading such trash, until I looked Heyer's life up. I was impressed to learn that she started her career back when women were barely allowed to be employed, in the 1920s, and her writing supported her flakey husband, two flakey brothers, and flakey son for the rest of her life. I was even more impressed to learn that she single-handedly invented the genre of historical romance.

I also reflected that she's only trashy in so far as someone like Kipling - her near contemporary - was trashy: lots of plot, lots of moral, not much challenge; and yet Kipling is in the cannon. One hates to have to bring up gender all the time - so I won't. But draw your own conclusions.
- May 07, 2017 No comments: Links to this post

THE GIRL WITH THE LOWER BACK TATTOO by Amy Schumer 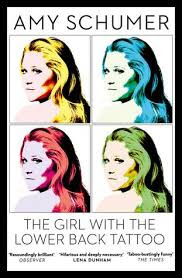 I was midway through a serious novel on POWs on the Burmese railroad when I realised I was just in too fragile a state for quality fiction about crimes against humanity. I therefore took emergency action on Amazon, and this yielded THE GIRL WITH THE LOWER BACK TATTOO.

I recently took similarly urgent action in an airport before a transatlantic flight with two other books by female American comics: Tina Fey's BOSSYPANTS (great) and Amy Poehler's YES PLEASE (horrible). I always used to hesitate to remunerate what I know to be cynical publishers trying to make money of TV tie-ins, but I guess I'm just getting less scrupulous as I get older. By the time I'm fifty I'll be reading golfer's autobiographies.
- May 01, 2017 No comments: Links to this post