THE BOYS FROM BRAZIL by Ira Levin 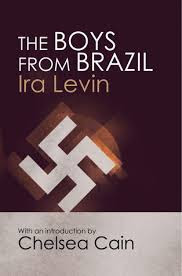 I wouldn’t say I am a big thriller reader and yet somehow I am on my way to having read almost all of Levin’s novels. A lot of them have been made into movies, I suspect because they are fantastic as one line pitches: Suburban husbands replace wives with robots; women gives birth to devil; etc. I’ve found he has you turning pages like it’s your job to get the novel read. I can’t say the same for THE BOYS FROM BRAZIL.

The premise is fun in theory SPOILER ALERT with Dr Mengele aiming to produce an army of Hilter clones. See how awesome that is as a one line pitch? And yet somehow it doesn’t quite come off. I thought for a while it was because it was rather dated. And while this is a problem, I’m starting to think it is instead because what we really read thrillers for is not the fright factor, but the fun factor – and this novel is just not very fun. I think this is not Levin’s fault. It’s basically unavoidable, because given the subject matter, the Holocaust is ever present – and that topic is so terrible, and so dark, and so sad, that it is almost impossible to read a book in which it features, and find it fun. In fact, after a while, even though I enjoy an army of thirteen year old Hitlers as much as anyone, I started to find the whole thing in rather bad taste. Somehow that’s just not as much of a problem with satanic babies and robot wives.