INSTEAD OF A LETTER by Diana Athill 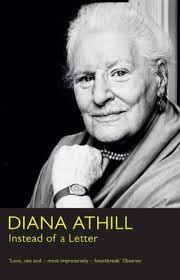 This book is surprising in its honesty. I find it surprising Athill is willing to be this frank with strangers; and really surprising she is willing to be this honest with herself. She lays down a real challenge to me in how to think about myself, to myself. The book tells the story of a break-up Athill suffered in her early twenties; and in another way, it tells the story of her whole life - because for her this break-up was . . . let's just say, it was a bad one. And not a couple of weeks of ice-cream in your jammies kind of a bad one. More a twenty years of despair kind of a bad one.

While at University, Athill got engaged to a man she had known since she was fifteen. He went to Egypt for work, while she completed her last year at Oxford. He wrote to her regularly, and warmly, and then one day stopped writing to her. There was total silence for two years, until he wrote formally, asking to be released from their engagement, because he was going to marry someone else. I mean, that's pretty bad. But for her it was enough to send her into a two decade long tail-spin. Here she is, reflecting on what kept her going:

I believe, however, that I owe to Oxford much of the stability and resilience which enabled me, later, to live through twenty years of unhappiness without coming to dislike life. I already had the advantages of a happy childhood and a naturally equitable disposition, and three years of almost pure enjoyment added to those advantages confirmed in me a bias towards being well-disposed to life without which, lacking faith, lacking intellect, lacking energy, and eventually, lacking confidence in myself, I might have foundered.

Lazy and self-indulgent, I was a lively girl only in my capacity as a female, and once I was wounded in that capacity I became, to face the truth, dull. (Since I believe that any recognition of truth is salutary, this should be a bracing moment, but it does not feel like that: it feels sad.)

See what I mean about a piercing, uncomfortable, honesty? That said, the despair is hard to understand. Perhaps in the 1940s, marriage was just that important to a woman's esteem. After that thought occurred to me, I thanked god on every page for the luck of being born now.

It's strange to read about someone who feels she has written off so much of her life. Despite what she says was a lack of interest in a career, she was for many years one of the most important book editors in London. But even this she does not claim as making her life worthwhile:

Eight years younger than myself, my cousin was an exceptionally pretty girl with a haunting personality, so that her life was considerably fuller than mine, and I slid prematurely into an attitude common among good-natured middle-aged women: that of taking so strong an interest in other people's lives that it largely fills the emptiness of one's own. I was comfortable in the routine of those years, and when on rare occasions I felt a stab of misery my reaction to it was not revolt against my circumstances but a deliberate attempt to become resigned to them. But to say that satisfying work was something that made me happy - that I could not have done. Something else, occupying only a fraction of each year and appearing to be marginal, made more difference to the colour of my days than did my work. My holidays.

In her forties, she slowly begins to recover. This is in part, as she says above, due to her holidays; in part, I think, because of her work; in part, because she wins a small writing prize, which makes her feel that perhaps after all she is not a failure. And failure she is not. This lady is a lovely, lucid writer. Enjoy these snippets:

After the late shift the tiny sequins of the traffic lights, reduced by masks during the blackout, changed from red to amber to green down the whole length of empty, silent Oxford Street. They looked as though they were signalling a whispered conversation, and they were the kind of thing with which I filled my days.

. . . the olive is the tree I would choose to keep if I could have only one: for the variety of shape, for the comforting roughness of its bark, for its minnow leaves, dark on top and silver underneath, which cast a shadow more delicately stippled than any other, and for its ancient usefulness, which makes it, like wheat, a symbolic thing.

INSTEAD OF A LETTER is full of these beautifully observed moments, which make you feel as if you have traveled deep inside her head. So much so that if one met her, it would be hard to act appropriately - i.e., like a stranger.

The book is remarkable to read today, but I can only imagine how remarkable it was when it first came out, when the genre of the 'memoir' barely existed. Let's end with a little snippet of her teenage fantasy - can you imagine how this must have knocked their 1940s socks off:

I lay sprawled on the parquet in my sage-green art-silk tunic and bloomer and my salmon-pink lisle stockings, thinking, 'If a stevedore' - why a stevedore? I am sure I had never met one - 'If a stevedore would come and rape me at this minute, I would let him'

The intimacy between people working together is an agreeable thing and very real, in spite of the disconcerting way in which it vanishes as soon as the same people meet each other in different circumstances.