OUR MAN IN HAVANA by Graham Greene 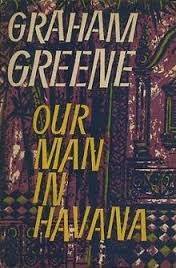 This is a very un-Graham Greene Graham Greene, which is odd, as it is a pretty famous Graham Greene. It's got a lot of what you expect: an abortive romance; a middle aged man; obssessive Catholic guilt; and somehow he has tried to mash these elements into a comedy.

Mr Wormold is a vacuum cleaner salesman in Cuba who is recruited as a spy by the British government and takes the job for the money. He falsifies reports to the centre, and when this is discovered, it is covered up by the authorities who do not want to be themselves embarrassed. This is I think supposed to be the hilarious and unlikely climax of a rollicking plot. Perhaps in the 1950s, when this was written, it could be read as such. Today it doesn't seem funny, or even improbable. In the era of Trump it reads like: this is what would probably happen. And also: what is there to laugh in about this? Or course spies are of limited competence. Of course the cnetre has its own political agenda. This is the tragic truth of the world.

In summary, if you're interested in Graham Greene, start with the classics, on his perennial topics of hearbreak and despair; THE END OF THE AFFAIR or THE HEART OF THE MATTER; let's avoid OUR MAN IN HAVANA