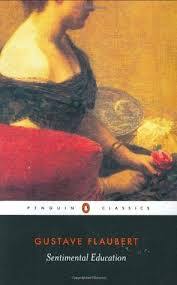 This is a book about a grand passion that goes nowhere. Frederic Moreau is a law student who falls madly in love with a another man's slightly older wife. He then pines after her for a couple of decades, and when she is finally available, decides she is now too old for him. He tries the law for a while, but then comes into a small fortune after which he rotates variously through arts, journalism, and politics, all with limited commitment. Meanwhile, major historical events are taking place in France: revolutions and so on. He is only tangentially involved.

So by the end of the 500 plus pages, you seem to have got precisely nowhere. At the end he is talking to his high school friend about a silly teenage prank, and the last lines of the book are them agreeing that that was "the best time we ever had". This an unexpectedly tough ending for a book that covers virtually the whole of someone's adult life, a life which was apparently - but I guess in the end not really - crammed with incident. It's pretty harsh.

Many contemporary critics hated the book, finding it meandering and meaningless. Others loved it, such as Theodore Banville who commented that it was'sad, indecisive and mysterious, like life itself, making do with endings all the more terrible in that they are not materially dramatic'. One of his friends wrote to Flaubert to say the book was popular among his generation:

Do you know . . . the great catchphrase of the day? It comes from your book. You say: "THE LAST PAGE OF Sentimental Education!"And you cover your face with your hands.

This tells me Flaubert's contemporaries were having a lot of issues we could relate to today. It's focus on a broadly meaningless life, while dressed up like a nineteenth century novel, makes it seem oddly modern.

This is not to say it is not boring. It is kind of boring. However the academic who wrote the introduction feels that that is the point:

Flaubert further complicates his scene by staging a confusing abundance of major characters. The inner circle, the fictional space just around the hero, is crowded with figures whose names we struggle to recall. . . . This is undoubtedly deliberate artistic practice, a trick of composition aptly called de-Balzac-ification. True to his exacting sense of the artistic vocation, insulated from the pressures of the market by his modest private income, Flaubert understood that the serious novel, the art novel, must detach itself from popular taste.

Next time I create something people don't like, I'm just going to say that I have detached myself from popular taste. That said, in among the meaninglessness and meander, there is lots of lovely writing. Let's end with this taster, of a life I am so grateful feminism has saved me from:

She was one of those Parisian spinsters who, every evening when they have given their lessons or tried to sell little sketches, or to dispose of poor manuscripts, return to their own homes with mud on their petticoats, make their own dinner, which they eat by themselves, and then, with their soles resting on a foot-warmer, by the light of a filthy lamp, dream of a love, a family, a hearth, wealth—all that they lack. So it was that, like many others, she had hailed in the Revolution the advent of vengeance, and she delivered herself up to a Socialistic propaganda of the most unbridled description.