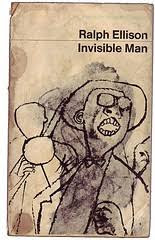 I have a distinctly elderly version of this book, bought in a charity shop. The back cover tells us, with what I read as an air of embarrassingly incredulity:  "The hero of this blistering, mightily successful first novel, like its author, is an American negro."

It is indeed a famous piece of African American literature, and so I wanted to like it, and at first I thought I did.  I early realised that disappointingly it is not in fact about a man who was not visible, but despite this, the beginning was still very interesting.  The lead character, who is eager for formal education, is expelled from university (for complicated reasons, largely but indirectly to do with race) and moves to New York. There follows a search for employment, and time at a paint factory -and then for me the novel started to off the rails.  There is some kind of electroshock therapy, and then some kind of strange secret political organisation, and then I lost interest.  As a teenager I would have had the discipline to push through, but as an adult I know when a book is going to bore me, and I am just not dutiful enough to the canon anymore to keep going.  I am not sure if I should be happy about that or not.
- October 27, 2017