THE TOE-RAGS by Daphne Anderson 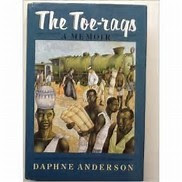 The subtitle says it all: "The story of a strange upbringing in Southern Rhodesia."  Strange it certainly is.  South Rhodesian, not so much - at least today - as Southern Rhodesia is now Zimbabwe.  I would summarise by saying this is basically a story about being a poor white.  But I mean a really poor white.  The author and her siblings grow up in the rurals outside Rusape.  They get close to starving.  Their mother walks out on them when they are in junior school, to run off to Joburg with her husband's brother.  Now there's a novel I'd like to read, and I don't find her behaviour so very indefensible in itself, except she runs off when both her husband and her domestic worker are away.  Luckily the worker comes home early, so the kids end up at the police station rather than the morgue.

Then its on to their relatively wealthier aunt's home in Salisbury, and then on to better schooling (at the Convent, my high school), and finally an almost white collar job.  As an adult the author leads a strange social life in Salisbury before the second world war, providing an interesting window into a largely forgotten world.  During the war she marries a soldier on leave who she has known for just nine days, and on this bizarre decision this strange novel ends.  (After all, don't most women's stories end with marriage?  What else could there be?)

I enjoyed this book, both because it is well written, and because it is rare.  If you are a tiny minority from a tiny country it is almost never you read a book by your demographic, but here we are: a book by a white Zimbabwean woman.  Admittedly, the bar is high, as this small group includes Nobel laureate Doris Lessing; but this is a worthy addition.
- October 15, 2017